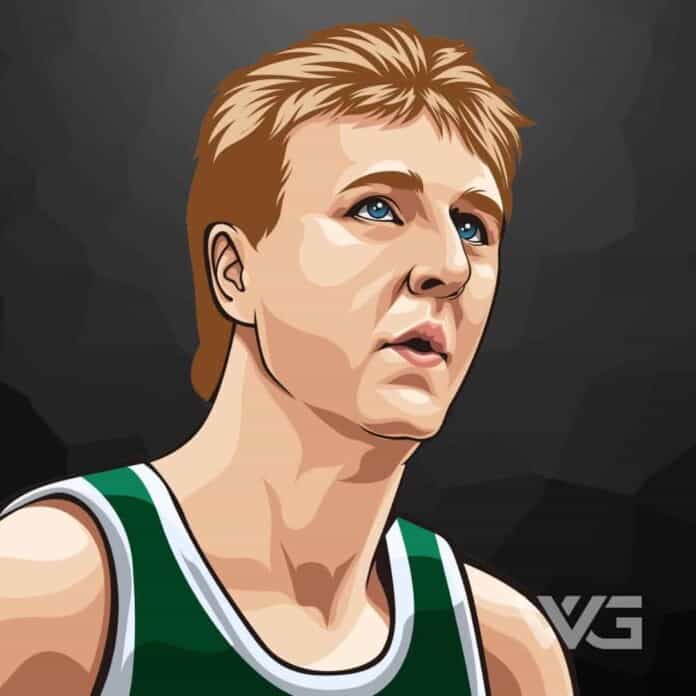 What is Larry Bird’s net worth?

As of February 2023, Larry Bird’s net worth is approximately $75 Million.

Bird recently served as President of Basketball Operations for the Indiana Pacers in the NBA. Bird is widely regarded as one of the greatest basketball players of all time.

Larry Joe Bird was born on the 7th of December, 1956, in West Baden Springs, Indiana. He grew up in this village which is nearby to a town named French Lick.

Back in the village, Larry’s mother, Georgia, was struggling to raise him and his five siblings. Georgia managed to work at two different places in order to make both ends meet.

Bird’s remarkable achievements while playing for his school caught the attention of Indiana University which offered him a scholarship and an opportunity to play for their team under the tutelage of the then top mentor Bob Knight.

His breakthrough came in the year 1978 when he was chosen to play for ‘Boston Celtics’. But Larry declined the offer and decided to play in the final season for Indiana State. He continued playing for ‘Sycamores’ and led the team to qualify for the NCAA title game.

Larry won the All-Star Game MVP Award in 1982 and was the runner-up for the Most Valuable Player Award. Larry then faced a bit of downfall, but it did not stay for a long period of time. After losing seven games for the Conference Finals, the team finally won five Conference Finals.

In 1987, he could not save his team from losing six back-to-back games against ‘Lakers’, and eventually, the team lost the Eastern Conference Finals.

Bird made a comeback in the NBA in 1989, his health once again failed him.

Here are some of the best highlights of Larry Bird’s career:

“I have always been confident in my skills and once the game got going I knew I was probably the best player on the floor most of the time whether it was junior high, high school or college. I knew I had control of the game.” – Larry Bird

“Practice habits were crucial to my development in basketball. I didn’t play against the toughest competition in high school, but one reason I was able to do well in college was that I mastered the fundamentals. You’ve got to have them down before you can even think about playing.” – Larry Bird

“Leadership is diving for a loose ball, getting the crowd involved, getting other players involved. It’s being able to take it as well as dish it out. That’s the only way you’re going to get respect from the players.” – Larry Bird

“A winner is someone who recognizes his God-given talents, works his tail off to develop them into skills and uses these skills to accomplish his goals.” – Larry Bird

“When I was a kid, like 14 or 15, I played with the waiters from the hotel, ’cause that was the best game. And these guys, they’d let me play. And they were black guys.” – Larry Bird

“Leadership is getting players to believe in you. If you tell a teammate you’re ready to play as tough as you’re able to, you’d better go out there and do it. Players will see right through a phony. And they can tell when you’re not giving it all you’ve got.” – Larry Bird

Now that you know all about Larry Bird’s net worth, and how he achieved success; let’s take a look at some of the lessons we can learn from him:

1. Do The Important Thing

Focus on one thing at a time. Crush it. Then move on to the next thing. Ideally, before beginning your work in the morning, take 10 minutes to review the ONE most important thing you need to do today.

When you find yourself giving too much importance to something, just bust it down to what it really is, rather than romanticizing it into something it isn’t.

Action is not just the effect of motivation, but also the cause of motivation. The key to dealing with the fear of failure is knowing that you’re already ready. When you’re stuck on a problem, don’t just sit there, do something.

How much is Larry Bird worth?

Larry Bird’s net worth is estimated to be $75 Million.

How old is Larry Bird?

How tall is Larry Bird?

Larry Bird is an American former iconic basketball player who played for NBA’s ‘Boston Celtics’. He is a legend in the NBA scene as he holds many records and brilliant career stats. No wonder he is also addressed as ‘Larry Legend’.

What do you think about Larry Bird’s net worth? Leave a comment below.