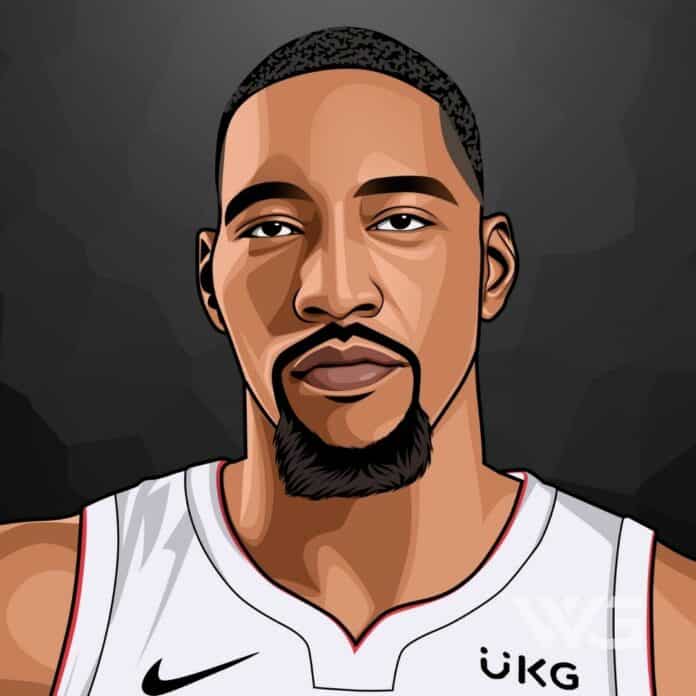 What is Bam Adebayo’s net worth?

Edrice Femi “Bam” Adebayo is an American professional basketball player who has played for the Miami Heat since being drafted by them in 2017.

While his career is still relatively new, he has accomplished a lot during his time on the court, which has made him one of the most popular players in the NBA.

Fortunately for his fans, Adebayo has no plans of retiring anytime soon, so we can expect to see much more from him for many more seasons to come.

Edrice Femi “Bam” Adebayo was born July 18, 1997, in Newark, New Jersey, to a Yoruba Nigerian father and an African-American mother.

When he was seven, his mother moved to North Carolina, where he later attended Northside High School and started playing basketball, averaging 32 points per game.

His skills on the court quickly made him stand out, and in 2015 he was named MVP at the Under Armour Elite 24 game.

After his junior year, he was transferred to High Point Christian Academy, where he continued playing basketball, scoring 22 points during his debut game.

After graduating, many colleges and universities attempted to recruit him as one of the best high school prospects in 2016. However, he ultimately decided to commit to the University of Kentucky.

During his collegiate career, Bam became the number one seed entering the SEC tournament, and in 2017 he was elected to the SEC-All Freshman team and the Second-team All-SEC.

Bam Adebayo started his professional basketball career in 2017 when he was selected as their 14th overall pick. During his rookie season, she averaged 6 points and 5 rebounds per game.

In 2019, he achieved his first career triple-double, scoring a career-high 30 points and 11 assists and rebounds during a game against the Atlanta Hawks.

He repeated this feat the same year during a game against the Dallas Mavericks, scoring 18 points, 10 assists, and 11 rebounds.

By the end of the 2019-20 season, he was voted as the runner-up Most Improved Player, and he was also named to the NBA All-Defensive Second Team.

In 2020, he signed a five-year extension with the Miami Heat and, the following year, earned his third career triple-double, scoring 16 points, 10 assists, and 12 rebounds.

While he was cut from the United States national team in 2019 before the World Cup, he was named to the 2020 Olympic team and ended up winning gold at the Olympics in Tokyo.

Playing for one of the richest NBA teams has certainly paid off for Bam Adebayo, and his steadily increasing fortune highlights just how well he’s done for himself.

While he may not yet be one of the richest NBA players in the world, he is well on his way to becoming one if he continues with his career without retiring early.

Although he hasn’t yet accumulated the same amount of wealth as DeMar Rozan, with the way his salary is steadily increasing, we expect it won’t be long until the pair are equally wealthy.

So long as Adebayo continues playing the way he has and doesn’t decide to take an early retirement, his net worth is guaranteed to skyrocket in the coming seasons.

Despite being one of the most popular basketball players in the NBA, not much is known about Bam Adebayo’s personal life, and he tends to keep a low profile when he isn’t on the court.

However, he is active on his official Instagram account, where he keeps fans updated on his career and biggest milestones. He also sometimes posts photos of himself and his mother, who he bought a house for in 2020.

Bam can also be found on his official Twitter account, where he posts about things that interest him and his career.

If any additional information about his personal life is made public in the future, we will be sure to keep you updated!

Bam Adebayo has received a lot of recognition for his skills on the court, and the awards and honors he’s won have been well deserved.

Although all of his achievements are noteworthy, some have undoubtedly been more prestigious than others.

Here are some of Bam Adebayo’s most important accomplishments and awards:

Like Dikembe Mutombo and DeAndre Jordan, Bam Adebayo has earned quite a few distinctions for his skills as a basketball player.

While not currently the most decorated player on the court, we expect him to earn many more accolades and honors before his far-off retirement.

How Does Bam Adebayo Spend His Money?

Coming from a poor background, Bam Adebayo has learned the importance of both saving money and spending it for a good cause.

While Bam himself lives in a lavish mansion, he has also done everything possible to ensure that his mother is taken care of.

In 2020, he bought his mom a new home for her 56th birthday as a thank-you for everything she did for him while growing up.

Also, in 2020, Adebayo helped out a single mother in his community who was facing eviction by paying her rent for a whole year. If that wasn’t enough, he also paid for upgrades to her home, including outdoor landscaping.

While he could easily spend his riches on himself, buying the most expensive Lamborghinis in the world and all the latest drip, he more often than not gives more than he receives.

Bam Adebayo’s career may be short, but his time in the NBA has been filled with memorable moments that have helped make him a fan-favorite player.

However, while all of his milestones are important, some stand out for their overall impact on his career and wealth as a whole.

Here are some of the best highlights of Bam Adebayo’s career:

While these are only a few of his greatest accomplishments and milestones, they are some of the most important that Adebayo has experienced.

He may not yet have achieved as much as Chris Bosh, but he is certainly well on his way to becoming a legend on the court.

Bam Adebayo is one of the NBA’s best players, and his skills have earned him a lot of recognition from fans.

However, despite his prowess on the court, he remains remarkably humble about his abilities and isn’t one to boast about all of his victories.

Here are our favorite quotes from Bam Adebayo:

There is a lot that we can learn from Bam Adebayo and his short but impressive career in the NBA.

Now that you know all about Bam Adebayo’s net worth, we can take a closer look at what he can teach us about reaching our own goals.

Here are some of the best success lessons to learn from Bam Adebayo:

You can’t become successful if you’re not at least a little bit competitive, because competition can give you the drive to keep achieving more.

No matter what field you’re in, you should constantly be trying to stand out from the others around you so that you can gain more recognition for your work.

Even if you think that you have mastered a skill, you should always try to improve further because there is always more you can learn.

You also should do what you can to learn new skills, because the more you can diversify your skill set, the more you will be able to stand out.

3. Surround Yourself With The Right People

If you want to be successful, you’re going to have to surround yourself with the right people. This means people that can help you when you need it most.

Build a solid support network filled with people you can rely on so that you don’t overburden yourself and end up getting burned out.

Bam Adebayo has quickly become one of the best players in the NBA, and he has no plans of stepping away from the court anytime soon.

While his career hasn’t been that long, he has had a huge impact on the game and consistently standouts out thanks to his skills.

Make sure to check back often so that you won’t miss any updates as Adebayo continues to grow his fortune and fame in the NBA.

What do you think about Bam Adebayo’s net worth? Leave a comment below.