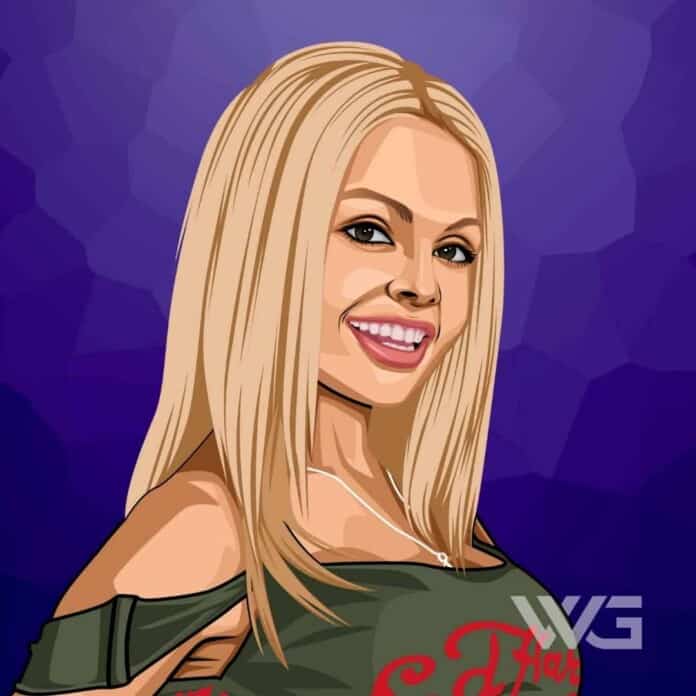 What is Jesse Jane’s net worth?

Jesse Jane is an American adult film actress and model from Texas. Jane is the recipient of numerous awards and nominations over her career in the adult industry such as the AVN and XRCO Hall of Fame.

As of December 2022, Jesse Jane’s net worth is approximately $6 Million.

Cindy Taylor was born on the 16th of July, 1980, in Texas. She grew up on various military bases in the Midwestern United States.

She did extensive dance training and was a varsity cheerleader at her high school in Rose Hill, Kansas. Taylor graduated from Moore High School in More, Oklahoma in 1998.

Jane read an article on Tera Patrick that said that Patrick worked for adult-film production company Digital Playground. She contacted them and was quickly signed to a contract. Her first scene was with Devon in ‘No Limits’.

Jesse Jane at the AVN Adult Entertainment Expo 2008. Jane has hosted several adult industry award ceremonies throughout her career including the AVN Awards in 2006 and 2013, the F.A.M.E. Awards in 2008, and the XBIZ Awards in 2008 and 2011.

In 2015 interview, she announced she no longer goes by the name “Jesse Jane” but rather simply “Jesse”.

The reason was that she was in a dispute with her former employer of 12 years, Digital Playground, who owns the rights to her former stage name.

Jane announced that she would retire from the adult industry and that the 2017 AVN Awards would be her last in January 2017.

Here are some of the best highlights of Jesse Jane’s career:

“I’m really excited. Pirates were one of my favorite movies to shoot, ever. Everyone involved put a lot of effort into it – not just the cast but everyone, especially the crew and our director. We all put a lot of work into it, and the response we got for it, the first time, has been awesome, and now that we’ve got this R-rated cut it’s taking things to a whole new level. I’ve been telling everyone about it!” – Jesse Jane

“I think it’s really exciting because it hasn’t been done before. It’s kinda cool to make history and make it happen and maybe be the beginning of a new thing.” – Jesse Jane

“Absolutely! I think a lot of people will see the film because there’s been so much said about it, and the cinematography and the special effects that make it like a real film. New people will be curious about it, and people that wouldn’t normally see an adult film will be exposed to it.” – Jesse Jane

“We went to Florida and we got to do all these really new things. Actually acting, sword fighting, all the extra people coming in, all that stuff was really cool because we were like, ‘Man, we’re really on a movie set!’ It made me work harder and it was cool.” – Jesse Jane

Now that you know all about Jesse Jane’s net worth, and how she achieved success; let’s take a look at some of the lessons we can learn from her:

Stop giving other people the power to control your happiness, your mind, and your life. If you don’t take control of yourself and your own life, someone else is bound to try.

Sometimes all a person wants is an empathetic ear; all he or she needs is to talk it out. Just offering a listening ear and an understanding heart for his or her suffering can be a big comfort.

3. A Part Of Your Journey

Everyone you meet is a part of your journey, but not all of them are meant to stay in your life. Some people are just passing through to bring you gifts; either they’re blessings or lessons.

How much is Jesse Jane worth?

Jesse Jane’s net worth is estimated to be $6 Million.

How old is Jesse Jane?

How tall is Jesse Jane?

Jesse Jane is an American adult film actress and model who also worked and modeled for adult and mainstream media.

In addition to her adult film career, Jesse has appeared in several mainstream films and TV shows including ‘Entourage’, ‘Middle Men’ and ‘Bucky Larson’.

Jesse has starred in more than 75 adult movies but her most notable film is the “Pirates” series that is a parody of Pirates of the Caribbean.

What do you think about Jesse Jane’s net worth? Leave a comment below.