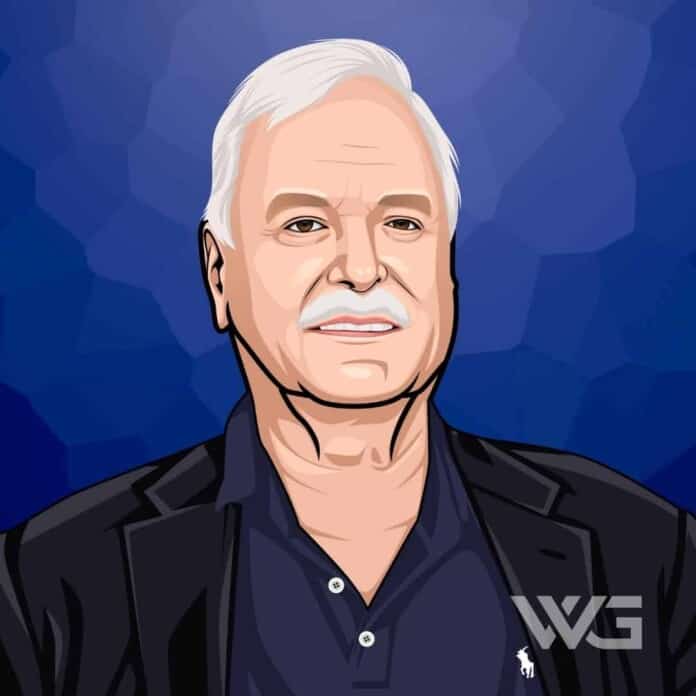 What is John Cleese’s net worth?

John Cleese is an English actor and producer. Cleese achieved much success at the Edinburgh Festival Fringe.

In the 196os, Cleese co-founded Monty Python, the comedy troupe responsible for the show ‘Monty Python’s Flying Circus.’ He has starred in Mynton Python films, including ‘the Holy Grail,’ ‘Life of Brian’ and ‘The Meaning of Life.’

John Marwood Cleese was born on the 27th of October, 1939, in Somerset. Cleese is the only child of Muriel Evelyn and Reginald Francis Cleese. As a child, he supported Bristol City FC and Somerset County Cricket Club.

Cleese went to school at St Peter’s Preparatory School, where he received a prize for English and did well at cricket and boxing. When he was 13 years old, he was awarded an exhibition at Clifton College.

Cleese began writing scripts at an early age, and he would come into contact and work with Graham Chapman. His traveling revue brought him to New York. He began to appear in Broadway and Off-Broadway productions, and he also got offered a job as a writer for BBC Radio.

He worked for ‘The Dick Emery Show’ and ‘I’m Sorry, I’ll Read That Again’. His work on ‘The Forst Report’ gave him his first appearance on comedy television, and he began working with Eric Idle, Michael Palin, and Terry Jones.

Cleese worked with Chapman to come up with their success with ‘Monty Python’. Creative and lifestyle differences encouraged further collaboration.

‘Monty Python’s Flying Circus’ was very successful and had its run from 1969 to 1974 on BBC Television. After the Circus, he remained friends with the now-famous group of writers and comedians. They started to write feature films which include ‘Monty Python and the Holy Grail,’ ‘Monty Python’s Life of Brian’, as well as ‘Monty Python’s The Meaning of Life’.

How Does John Cleese Spend His Money?

John Cleese has lived in many lavish homes, and he has also helped different charities.

Cleese has owned many lavish homes throughout the years. In 2018, he was leaving England, and he listed home near Bath and a London Apartment. He intended to relocate near the Caribbean Islands of Nevis.

Cleese has helped many different charity organizations over the years. Some of the charities he has supported include Amnesty International, Dream Foundation, and Small Steps Project.

Here are some of the best highlights of John Cleese’s career:

“The real religion is about the understanding that if we can only still our egos for a few seconds, we might have a chance of experiencing something that is divine in nature. But in order to do that, we have to slice away at our egos and try to get them down to a manageable size, and then still work some practiced light meditation. So real religion is about reducing our egos, whereas all the churches are interested in is egotistical activities.” – John Cleese

“Now most people do not want an ordinary life in which they do a job well, earn the respect of their collaborators and competitors, bring up a family and have friends. That’s not enough any more, and I think that is absolutely tragic – and I’m not exaggerating – that people feel like a decent, ordinary, fun life is no longer enough.” – John Cleese

“You can’t make Christ funny. He’s self-aware, he’s too flexible within the situation. It’s rigidity, it’s when the ego takes over and the behavior becomes inappropriate that it becomes funny.” – John Cleese

“When you’ve only got few days of rehearsal before you’re in the studio, it’s wonderful to start off with people that you have good, friendly, tolerable relationships to start with, for the simple reason that you don’t have to spend 24 hours figuring out how sensitive they are, and can you give them a line reading, or how do you have to give them direction.” – John Cleese

“On movies, I like to involve the cast in the writing of the script. I like to have a rehearsal period, after which I do the last draft, which gives me a chance to incorporate anything the actors have come up with during the rehearsal period, so I’m very inclusive as a writer.” – John Cleese

Now that you know all about John Cleese’s net worth and how he achieved success; let’s take a look at some of the lessons we can learn from him:

1. Do What Makes You Happy

Now, most people do not want an ordinary life in which they do a job well, earn the respect of their collaborators and competitors, bring up a family and have friends.

The one who laughs most learns best.

A wonderful thing about true laughter is that it just destroys any system of dividing people.

How much is John Cleese worth?

John Cleese’s net worth is estimated to be $20 Million.

How old is John Cleese?

How tall is John Cleese?

What do you think about John Cleese’s net worth? Leave a comment below.