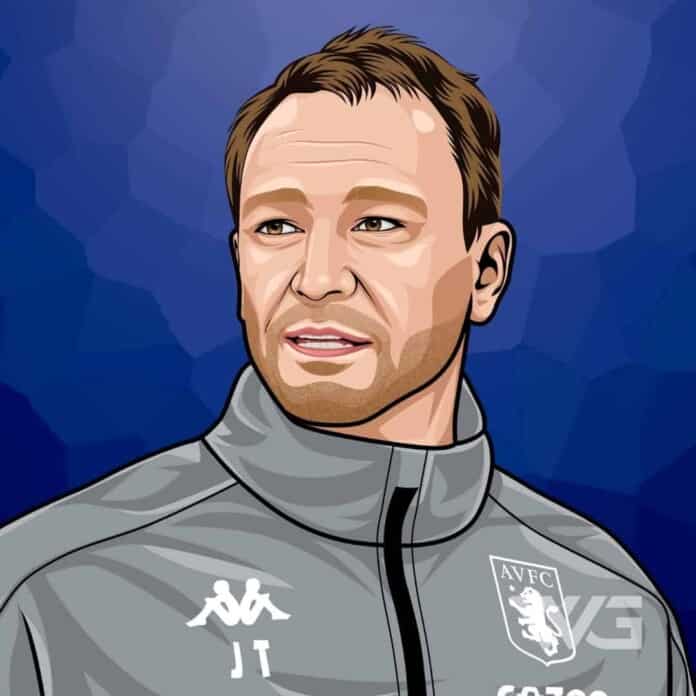 What is John Terry’s net worth?

John George Terry is a former professional footballer and coach who boasts one of the most impressive careers in the sport.

Considered to be one of the best defenders of his generation at his peak and one of the best in the English and Premier League, Terry made a huge name for himself both on and off the field.

During his time as a coach, he is hailed as the most successful Chelsea Captain, leading them to numerous wins throughout his 19 years with the club.

All of this success has made John Terry’s net worth one of the largest in football, and, given his years with the sport, he has definitely more than earned it.

John George Terry was born in 1980 in Barking, Greater London, where he attended Eastbury Comprehensive School and played football in the local Sunday League, Senrab.

As a young boy, Terry initially played in West Ham United’s youth team as a midfielder in 1991, but when he was 14, his family moved to Chelsea, and he started playing for the club’s reserve and youth teams there.

Due to a lack of central defenders, Terry was given the centre-back position, which he maintained throughout his entire professional football career.

Once he graduated from school, he joined the club as part of a youth training scheme and signed on as a professional footballer a year later.

John Terry established himself in the Chelsea team during the 2000-2001 season, where he made 23 starts and was voted the club’s Player of the Year.

In 2005, the new Chelsea manager, Jose Mourinho, chose Terry to become the new club captain, and he went on to lead the team to win many Premier League titles.

Terry continued his football playing career until the end of the 2016-2017 season when he left after playing his 717th game for Chelsea.

In July 2017, he signed a one-year contract with Aston Villa but left after the club failed to be promoted to the Premier League.

Terry also played international football, debuting in 2003 and going on to play for the England National Football team at Euro 2004.

His place in the team was cemented when he was chosen to play in the 2006 FIFA World Cup and became the only English player named to the All-Star Squad.

The same year, coach Steve McClaren named John Terry as the English team’s captain, succeeding David Beckham, who is now one of the richest athletes in the world and one of the most well-known football players.

Unfortunately, Terry’s success in this position was overshadowed by allegations of bad behavior, which led to manager Fabio Capello removing Terry from his position as captain, replacing him with one of the richest soccer players in the world, Rio Ferdinand.

Following disappointing games against the United States and Algeria, Terry began to feel dissatisfied and eventually retired from international football in 2012.

After leaving the field, John Terry went on to become the assistant coach of Aston Villa in 2018, remaining in the position for three years until the team was promoted to the Premier League.

In 2021, he returned to Chelsea, officially starting his coaching consultancy position in January 2022.

John Terry has earned his impressive net worth throughout his career by being one of the best football players in the world.

At his peak in 2007, John Terry became the highest-paid player in Premier League history, earning roughly $158,000 per week.

During his time as an assistant coach at Aston Villa, he brought in a salary of about $88,000 per week. Although it is much less than his salary while playing for one of the richest soccer teams, it is nothing to turn your nose up at.

In his current position at Chelsea, he makes an estimated $12.5 million per year, which has helped maintain his extraordinary net worth.

John Terry is married to his childhood sweetheart Toni Poole, and the pair wed in 2007 at Blenheim Palace.

A little more than a year before their wedding, the couple gave birth to twins, Summer Rose and Georgie.

As one of the greatest football players in history, John Terry has won his fair share of awards and accolades.

Here are some highlights from John Terry’s career:

How Does John Terry Spend His Money?

John Terry doesn’t shy away from the lap of luxury, and the things he spends his money on highlight this.

If that wasn’t enough, the footballer also had many renovations done, building two mega-mansions in place of the original home and adding luxury features such as a swimming pool and hot tub.

This house has since been sold, but Terry has plenty of other properties under his sleeve.

One of his previous mansions sold for $18.8 million to the Sultan of Oman and came with a swimming pool, sauna, and private fishing lake.

Similarly, his $5.8 million mansion, previously owned by golfer Colin Montgomerie, is just down the road from his other property investments and features an astroturf lawn, seven bedrooms, and four reception rooms.

While he may not be the owner of one of the most expensive houses in the world, at this rate, it’s only a matter of time before he makes the list.

John Terry has hit many milestones that most footballers can only dream of.

Here are some of the best highlights of John Terry’s career:

Captain John Terry had to know how to motivate his team and has gone on the record to say many notable things.

However, some of the things he’s said have stood out more than others, and we’ve chosen the ones that highlight Terry’s dedication and drive.

Here are our favorite quotes from John Terry:

Now that you know all about John Terry’s net worth, we can check out some of the things Terry’s great career can teach us about reaching our own goals.

Here are some of the best success lessons to learn from John Terry:

John Terry’s drive to keep going reminds us that we can never give up when it comes to trying to achieve our goals, no matter how difficult it gets.

John Terry has his eyes on eventually becoming a manager and makes time to try and learn as much as possible about what current and previous managers can teach him.

Regardless of what your goals are, it’s important to always try and learn new things, be it about those in your field or about new skills to help you reach your goals.

Without dedication to the sport, John Terry wouldn’t be the legendary football player that he is today.

Dedication is something that everyone who wants to be successful needs, and without it, you might as well be sleeping and hoping that your dreams will come true.

John Terry’s estimated net worth is just one of the many impressive things about him, and it’s unlikely that his records will be beaten in the near future.

The most successful captain for Chelsea FC, this ex-football player-turned-coach is poised to continue making history and even more money.

What do you think about John Terry’s net worth? Leave a comment below.