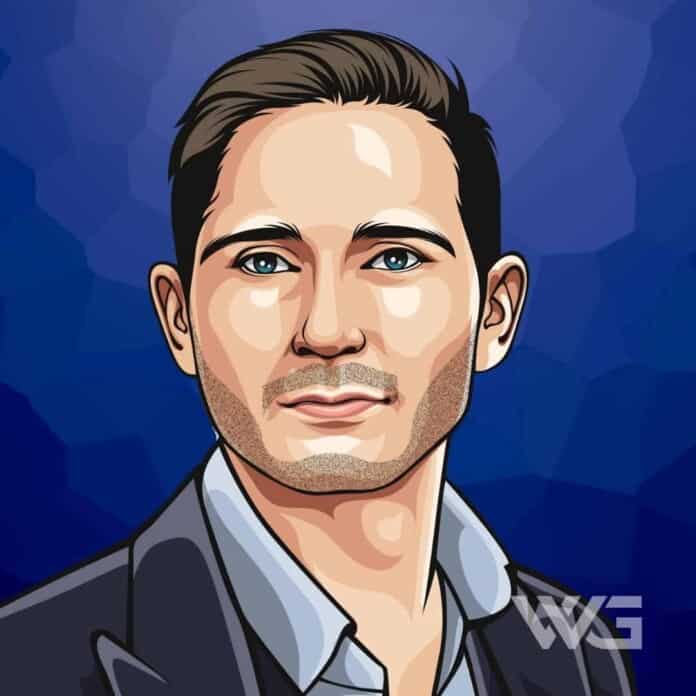 What is Frank Lampard’s net worth?

Frank Lampard is an English professional football manager and former player; who is currently the manager of Premier League club, Chelsea, where he used to play.

As a player, he is widely considered to be one of the greatest midfielders of his generation.

As of December 2022, Frank Lampard’s net worth is roughly $90 Million.

Frank James Lampard was born on the 20th of June, 1978, in Romford, London, England. His father, Frank Lampard, Sr. is a former professional footballer who played for West Ham United.

Frank is the youngest child of his parents and has two sisters, Natalie and Claire.

Frank Lampard started his career at his father’s former club, West Ham United, where he joined the youth team in 1994. He signed a professional contract with the club in 1995, but made his debut for the Second Division Swansea City team in October that year, while playing nine matches as a loan player.

He scored his first goal against Brighton & Hove Albion before returning to West Ham in January 1996; following which he debuted for the team as a substitute against Coventry City on 31st January.

Lampard debuted for Chelsea in 2001 against Newcastle United and was named in the ‘PFA Team of the Year’ in 2004.

He scored both the goals in Chelsea’s 2-0 win against Bolton Wanderers, winning the Premier League title for the team and earning the 2005 ‘Footballer of the Year award’ for himself.

His MLS debut was subsequently delayed as he kept playing for parent club Manchester City. It was later revealed that he never actually signed the contract.

Here are some of the best highlights of Frank Lampard’s career:

“A lot of things happened when I left there, and to be fair they treated me really bad, and now I have to play against them so I don’t have any feelings for them at all.” – Frank Lampard

“I’m not the kind of player to see out my time and sit with my bum on the bench too much. That’s my character.” – Frank Lampard

“In international football, you need pace and you need your players up top to create things out of nothing and run at people.” – Frank Lampard

“My dad shaped the footballing side of me, and Mum shaped me as a person. I’ve always been very close to her – we’ve only ever had one argument, and that was over something stupid when I was 13.” – Frank Lampard

“If you’re going to be a man that reads the papers and takes everything as gospel truth, that’s a sign of who you are, that isn’t a sign of the reality.” – Frank Lampard

“I think it was in Moscow last year and I got changed for training the day before we played Moscow, but the fact is they actually wanted to do John’s, I and John were next to each other and they did mine by mistake. John had done them I think. So yeah it is true.” – Frank Lampard

Now that you know all about Frank Lampard’s net worth, and how he achieved success; let’s take a look at some of the best lessons we can learn from him:

1. There Are No Mistakes, Only Lessons We Need to Master

If you learn from everything that happens to you, you will discover that there is no such thing as mistakes. And if you don’t, chances are that your life will look at 40 the same way it did when you were 20.

2. Forgiveness is a Gift You Give to Yourself

Forgiveness is a gift you give to yourself, to be at peace, to be happy and to be able to sleep at night. You don’t forgive because you are weak but because you are strong enough to realize that only by giving up on resentment will you be happy.

3. What You Resist, Persists

What you focus on expands and what you resist, not only does it persist, but it also grows in size. You need to stop feeding it by fighting against it.

How much is Frank Lampard worth?

Frank Lampard’s net worth is estimated to be $90 Million.

How old is Frank Lampard?

How tall is Frank Lampard?

Frank Lampard is a former English professional footballer who is also considered England’s most prolific penalty taker ever. He is one of the best midfielders of his generation.

What do you think about Frank Lampard’s net worth? Leave a comment below.