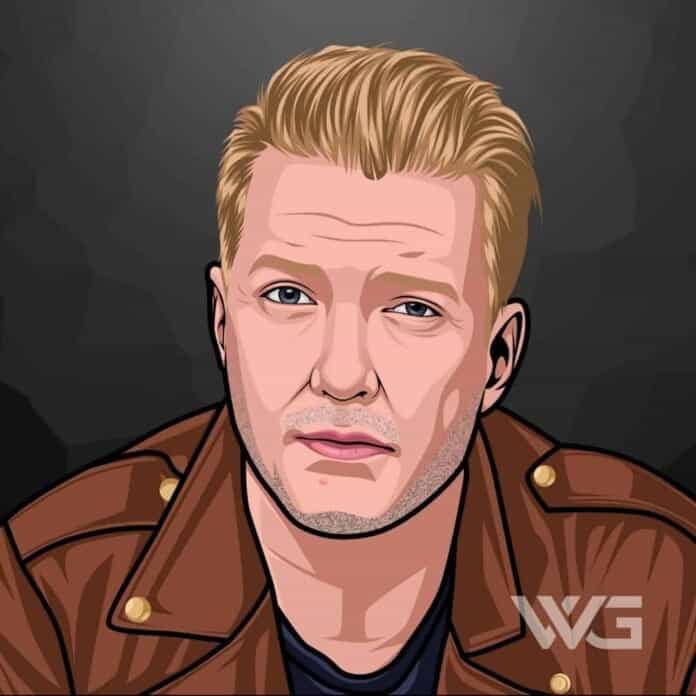 What is Josh Homme’s net worth?

Josh Homme is an American musician and record producer.

Homme is best known as the founder and only continuous member of the rock band Queens of the Stone Age.

Homme formed it in 1996, in which he sings lead vocals and plays guitar, as well as occasionally playing bass, piano, and drums. He also co-founded Eagles of Death Metal in 1998.

Homme is the son of Irene and Michael Homme. His father was a private general contractor who built houses around the Coachella Valley.

Homme has an older brother. His surname is believed to originate from the Norwegian village of Homme; he also has Canadian, English, French, German, and Swedish ancestry.

After the release of their debut album in 1998 and the sophomore ‘Rated R’ in 2000, the band broke onto the mainstream rock scene in American with the album ‘Song OF The Dead.’

It spawned radio hits like ‘No One Knows’ and ‘Go With The Flow’ and was also acclaimed for featuring former Nirvana member Dave Grohl.

Since then, Homme and the band have released several more albums. They all have been featured in the top 20 of the Billboard 200.

Homme has created music and albums with other bands such as Eagles Of Death Metal, Kyuss, and Them Crooked Vultures.

He also made a name for himself as a producer. One of his most notable works in producing albums for other bands was the album ‘Humbug’ by Arctic Monkeys.

How Does Josh Homme Spend His Money?

Josh Homme spends some of his money on real estate.

Here are some of the best highlights of Josh Homme’s career:

“The language that we use now impacts on the ability to vote. It impacts on the marketplace; instead of making things clear, it makes it more confusing. I think we need to stop using neutral language and speak in straighter terms. So when you agree to something, you actually get what you agreed to in the first place.” – Josh Homme

“I think you can separate yourself from your fears. You know what you should do, and it’s just scary to do it. But I’d hate to let the fact that I’m scared to do it make me not do it. It ends up defining you. Because the moves you make are then based on what you don’t want to do.” – Josh Homme

“I’m in three bands, and I love to produce records of other bands, and I have a family that I love. I wanted to be everything for everybody and do all of that… I think I just really beat myself up until I got really sick and needed surgery because it was physically manifesting itself.” – Josh Homme

“The first record I bought was a Carl Perkins record because I saw him at The Festival at Sandpoint, Idaho. I loved Elvis and I found out that he wrote ‘Blue Suede Shoes’… so connecting that experience of going to see him play was pretty awesome. That’s when I realized I wanted to play guitar.” – Josh Homme

“I don’t think it’s good to run on anger, but it’s really great when that’s the first couple of gallons in your tank – when you’ve had enough, and you’re just pissed off enough to go for it. In a lot of ways, that sort of environment can be a catapult for a great situation.” – Josh Homme

Now that you know all about Josh Homme’s net worth and how he achieved success; let’s take a look at some of the lessons we can learn from him:

Music is the only thing that doesn’t have any rules at all.

One of the coolest things you can do is disappear for a while because it gives you the chance to re-emerge. To sort of pounce out of the jungle.

Records don’t have to be perfect. Everyone doesn’t have to move left when everyone else moves left.

How much is Josh Homme worth?

Josh Homme’s net worth is estimated to be $6 Million.

How old is Josh Homme?

How tall is Josh Homme?

Josh Homme is an American rock musician, multi-instrumentalist, and record producer who is best known for being the rhythm guitarist and lead singer of the American rock band Queens of The Stone Age.

Homme was born in Joshua Tree, California. His style of music has often been defined as unconventional and dynamic.

Homme has worked and performed with musicians like Iggy Pop, Arctic Monkeys, and the Foo Fighters.

What do you think about Josh Homme’s net worth? Leave a comment below.