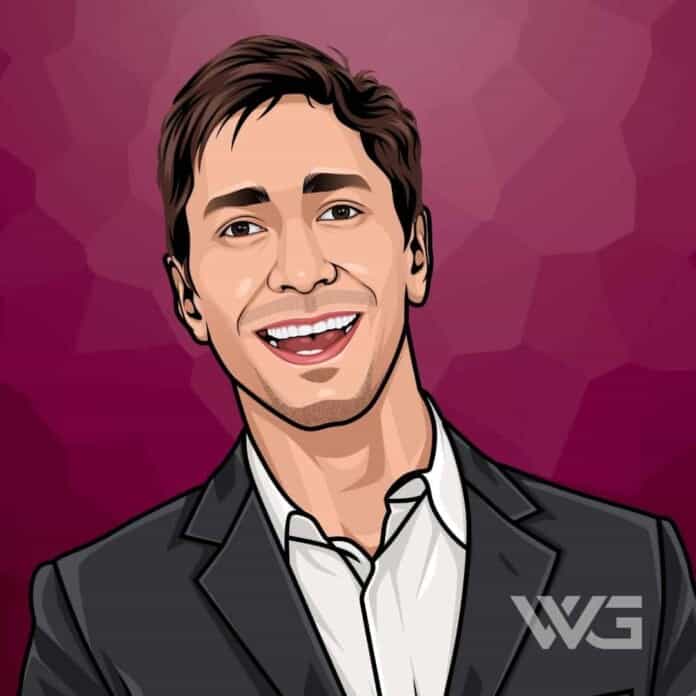 What is Justin Long’s net worth?

Justin Long is an American actor, comedian, and screenwriter.

Long is best known for roles in films such as ‘Jeepers Creepers,’ ‘Dodgeball,’ ‘Accepted,’ ‘Live Free or Die Hard,’ ‘He’s Just Not That Into You,’ ‘Drag Me to Hell,’ ‘Tusk,’ ‘Comet’ and ‘The Lookalike. ‘ He hosted the Disney+ original series ‘Shop Class.’ He appeared in commercials for Intel’s ‘Go PC’ campaign.

Justin Jacob Long was born on the 2nd of June, 1978, in Connecticut.

Long is the son of R. James Long, a philosophy and Latin professor. His mother, Wendy Lesniak, is a former actress who has appeared on stage. His paternal grandmother was of Italian descent.

Long’s older brother is a local stage actor, teacher, and theater director. Long attended Fairfield College Preparatory School, a Jesuit school, and Vassar College. He was a member of the sketch comedy group Laughingstock and starred in several plays, including Butterflies Are Free.

Long’s film credits include ‘DodgeBall: A True Underdog Story,’ ‘The Break-Up,’ ‘Crossroads,’ ‘Galaxy Quest,’ ‘Dreamland,’ and ‘Live Free or Die Hard.’ He was also a regular on the NBC TV series ‘Ed.’

He made a guest appearance in the documentary ‘Wild West Comedy Show’ in 2006. The following year, he co-starred with Bruce Willis as a “white-hat hacker” in ‘Live Free or Die Hard.

In 2010, he co-hosted WWE Raw with Going the Distance co-stars Charlie Day and Jason Sudeikis at the Staples Center in Los Angeles. In 2014 he starred in the independent love drama ‘Comet.’

On the 24th of June, 2019, Long presented ‘The Investigation: A Search for the Truth in Ten Acts,’ dramatic reading of Special Counsel Robert S. Mueller III’s Report on the Investigation into Russian Interference in the 2016 Presidential Election.

How Does Justin Long Spend His Money?

Here are some of the best highlights of Justin Long’s career:

“As I’ve gotten older and seen people around me evolving and moving on with life, I have a stronger sense of my own mortality, and time itself becomes more precious. I don’t want to spend this precious and limited time on things that don’t necessarily bring me happiness.” – Justin Long

“Never want to feel complacent, and I had started to, a little bit. I had started to feel like, “I have this thing I can do. It’s worked a few times,” but not only does that get boring, but you feel stagnant and unproductive. So I was feeling a lack of creativity and motivation, so I started making a more conscious choice to grow personally. It wasn’t even an image-conscious thing, like, “I don’t want people to think this way about me.” – Justin Long

“I loved the idea of doing impressions and mimicking and playing around with the spectrum of your own voice. That’s what I enjoy most about doing voiceovers. You can be completely unconscious with the rest of your body and concentrate on doing something with your voice, creating an entire character with your voice.” – Justin Long

“It’s so easy to misuse social media as a dating tool. I think it can be useful, but it’s scary when you think about who can access this information and what they’re doing with it.” – Justin Long

“What I enjoy most about doing voiceovers is that you can be completely unconscious with the rest of your body and just concentrate on doing something with your voice, creating an entire character with your voice.” – Justin Long

Now that you know all about Justin Long’s net worth and how he achieved success; let’s take a look at some of the lessons we can learn from him:

If you can measure success in this business based on happiness alone, you feel like you’ve hit the lottery.

Life is fragile, be grateful for what you have right now in your life.

Our life is all about our mindset, happy thoughts, happy life.

How much is Justin Long worth?

Justin Long’s net worth is estimated to be $14 Million.

How old is Justin Long?

How tall is Justin Long?

Justin Long is an American actor who is best known for personifying a Mac in a series of ads for the Apple Corporation entitled, “Get a Mac.” Long is recognized for his work in the films ‘He’s Just Not That Into You,’ ‘Jeepers Creepers,’ ‘Galaxy Quest,’ and ‘Dreamland.’

As a child of an actress, he followed in his mother’s footsteps entering the acting world himself. He graduated from Vassar College. He started his career as an acting teacher for children at Sacred Heart University.

What do you think about Justin Long’s net worth? Leave a comment below.

What is Don King's net worth? Introduction  As of ,...