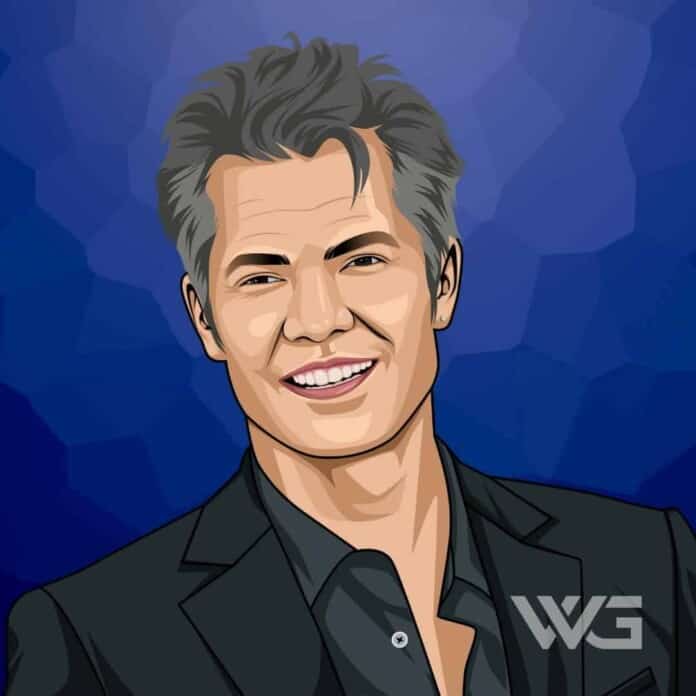 What is Timothy Olyphant’s net worth?

As of December 2022, Timothy Olyphant’s net worth is roughly $20 Million.

Timothy Olyphant is an American actor and producer from Honolulu, Hawaii.

He made his acting debut in an Off-Broadway theater in 1995, in ‘The Monogamist’, and won the Theatre World Award for his performance.

Timothy David Olyphant was born on the 20th of May, 1968, in Honolulu, Hawaii.

Olyphant is the son to JV Bevan Olyphant, former vice president of production at ‘Gallo Winery,’ and Katherine.

Timothy was a teenager when his parents divorced. They both later remarried. Timothy is of English, German, Scottish, Dutch, Irish, and Russian Jewish ethnicity and is a descendant of the Vanderbilt family of New York.

Olyphant earned his first role in 1995, in a ‘WB’ TV pilot based on the ‘ABC’ private detective series ’77 Sunset Strip.’ Later that year, he made his stage debut with the ‘Playwrights Horizons’ production ‘The Monogamist.’

Timothy made his big-screen debut with the 1996 comedy ‘The First Wives Club,’ which was adapted from Olivia Goldsmith’s novel of the same name. He was seen in the brief role of a young director named ‘Brett Artounian’ in the film.

In 2009, Timothy was seen in the lead role of ‘Dick,’ a hospital caretaker-turned-ATM robber, in the Canadian film ‘High Life.’ His performance helped him bag a ‘Genie Award’ nomination.

He bagged the ‘Satellite Award’ for the ‘Best Actor’ in 2011 and was nominated for the same in 2012. Additionally, Timothy earned nominations for the ‘Primetime Emmy,’ the ‘TCA Award,’ and the ‘Critics’ Choice Television Award.’

In 2016, Timothy won a ‘Critics’ Choice Television Award’ for his performance as ‘Rake Grinder,’ a fictionalized version of himself, in the ‘Fox’ single-camera legal comedy ‘The Grinder.’

Here are some of the best highlights of Timothy Olyphant’s career:

“It’s changed throughout the years, but at one time I was a really big bubble gum ice cream fan. I’d spit the bubble gum pieces in a cup and then collect them.” – Timothy Olyphant

“The basic thing a man should know is how to change a tyre and how to drive a tractor. Whatever that bearded dude is doing on the Dos Equis beer commercials sets the bar. That’s your guy. Every man should be aiming to be like him. The beard is just the tip of the iceberg.” – Timothy Olyphant

“I’m attracted to roles that are unpredictable, and if I can get my hands on something like that, I’m thrilled. I like performances where you don’t know what’s coming, moment to moment.” – Timothy Olyphant

“As far as the leading man/romantic lead, I’ll tell you what, I really enjoyed my experience more than I thought or imagined I would on ‘Catch and Release.’ God bless them if they want to give me another shot at that. I would love to have that as something I can go to on occasion.” – Timothy Olyphant

“Sharks will scare me. I went out to Malibu a couple of weeks ago. Beautiful, clear day, out in five feet of water, going to surf, and there was this big old’ freakin’ leopard shark… I’m looking at him and I’m thinking, ‘OK, he won’t hurt me.” – Timothy Olyphant

Now that you know all about Timothy Olyphant’s net worth, and how he achieved success; let’s take a look at some of the lessons we can learn from him:

Wisdom is the reward for surviving our own stupidity.

Be careful the stories you’re telling yourself about your current circumstances; a head full of negative thoughts has no space for positive ones.

How much is Timothy Olyphant worth?

Timothy Olyphant’s net worth is estimated to be $20 Million.

How old is Timothy Olyphant?

How tall is Timothy Olyphant?

Timothy Olyphant is an American actor and producer who is nicknamed “Olyphantastic” because of his multiple talents.

From sports to arts to finally acting, the actor has had a wide array of experiences. Timothy has earned numerous nominations and four awards for his brilliance on the screen.

As of December 2022, Timothy Olyphant’s net worth is estimated to be $20 Million.

What do you think about Timothy Olyphant’s net worth? Leave a comment below.