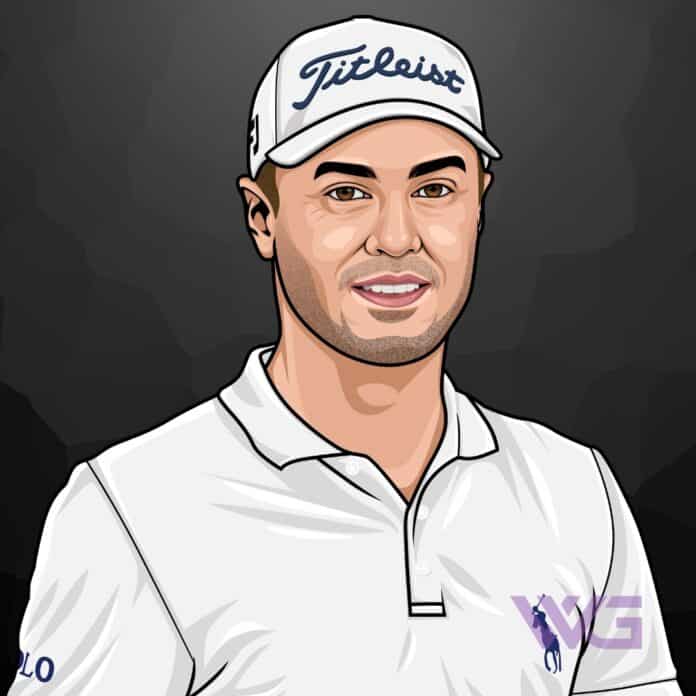 What is Justin Thomas’ net worth?

Justin Thomas is a former professional golfer who was the world number one on the PGA and World Tours.

He received wide recognition in 2017 after a stupendous year, winning five PGA Tour events and, with that, the FedEx Cup championship as well.

As of November 2022, Justin Thomas’ net worth is estimated to be $30 Million.

His father, Mike, was the head of the Harmony Landing Country Club and started to teach Justin when he was a toddler.  Justin was inspired to play golf after witnessing Tiger Woods win at the 2000 PGA event in Valhalla when Justin was only 7 years old.

He attended North Oldham Middle School and played at the Wyndham Championship on the PGA Tour at the age of 16.

This made him the third youngest to qualify for the PGA Tour event ever. Justin ended up graduating from St. Xavier High School in 2011.

At the University of Alabama, where he played golf for the school, as a freshman, Justin received the Haskins Award and made it onto the national championship team in 2013.

That year, he led the Crimson Tide to win their first National Championship and marked the year that Justin decided to turn professional in the sport.

The first professional match he won was the Nationwide Children’s Hospital Championship in 2014. Before this, he was able to achieve his tour card for the Web.com Tour with the help of a qualifying school.

In 2014, he finished the year in fifth place and then finished in third place at the Web.com Tour Finals. After he earned his PGA Tour card for 2015, there was no stopping him achieving his first victory after beating Adam Scott at the CIMB Classic in Malaysia.

He was able to defend his title the following year, marking his second tour win. In 2017, he made history at the Sony Open located in Hawaii, where he was the seventh player to shoot a 59 in PGA Tour history.

In the same year, Justin won the SBS Tournament of Champions. He also beat a record in the U.S Open in Erin Hills with a score of 63. Justin won his first major with a lead of two shots over his nearest rival at the 2017 PGA Championships.

He achieved his eighth win on tour at the Honda Classic in Florida in 2018. Unfortunately, he suffered a loss against Phil Mickelson at the WGC-Mexico Championships.

The following year, he was victorious at the BMW Championship at the Medinah Country Club and also received the CJ Cup while playing in South Korea in 2019.

Recently, Justin helped the U.S team at the 2021 Ryder Cup in Wisconsin and qualified for the 2022 Presidents Cup where he won four matches alongside Jordan Spieth.

Competing with Bubba Watson, Tiger Woods, Vijay Singh, Ernie Els, and some of the other richest golfers in the world, Justin Thomas is sure to improve on his already substantial pro tour winnings.

With Justin’s PGA Championship win, he became the 64th player to win 15 times on the PGA tour.

He is also only the sixth player since the Second World War to win 15 titles, as well as two majors, before the age of 30. He joins golfing greats such as Jack Nicklaus and Rory McIlroy who have managed this feat in the past.

Together with his sponsorship deals and endorsements, Thomas earned a substantial amount in 2021 and 2022, making him an exceedingly rich man.

Should his luck hold and Justin continues to make a success of his career, he will most likely join the list of the richest golfers in the history of the sport.

Justin finished within the top five positions for his fourth consecutive season in the FedExCup.

With his spectacular wins over the last two years, he’s managed to earn multi-million-dollar bonuses to top up his earnings.

Here’s a breakdown of Justin Thomas’ annual net worth:

Over the course of his career, Justin has won more than $70 million in prize money. When combined with his sponsorships and other contracts, he is one of the most financially successful golfers of the modern era.

Justin has been in a long-time relationship with Jillian Wisniewski, a journalist, since 2015. It has been announced that the couple is engaged and does not have any children yet.

Jillian is very supportive of her fiancé’s career and was present to see his victory in 2017.

While Justin is in the public eye when on tour, he tries to keep his private life out of the media and there is little information on what he does outside of golf.

What we’ve been able to discover is that he loves pool, and has a half-share in a custom, crimson-colored pool table with a fellow golfer, Bud Cauley.

Justin has one of the most impressive tour records in recent memory. He has dominated the leaderboard and been in the money in every single tournament he’s entered for the last few years.

Here are some of the more memorable moments from Justin Thomas’ career:

He’s done extremely well when playing overseas and is currently ranked in the top 10 best golfers in the world.

This is a pretty impressive achievement given that he is not yet 30 years old.

How Does Justin Thomas Spend his Money?

Justin is generous and willing to help wherever he can, establishing the Justin Thomas Foundation in 2019 to assist military families, young golfers, and children in need.

Due to the convenience of practice venues and the weather, Justin currently resides in Florida, where most of the top 30 golfers in the country live.

He does not have much of a car collection but is the proud owner of a Range Rover. So, for the immediate future, you’re unlikely to see him driving one of the most expensive cars in the world when he’s out and about.

Right from before he became a professional golfer, Justin’s golfing progress has been nothing short of amazing.

He’s no stranger to the winner’s podium and, as a pro, is likely to be appearing at the winner’s table for most of the competitions he enters.

Here are some of the best highlights of Justin Thomas’ career:

He and Jordan Spieth are best mates and have been since they were teenagers.

Justin has commented that it is amazing that the two of them are able to compete at such an elite level and look set to do so for the foreseeable future.

Justin has had to deal with his sudden popularity across the world, which puts additional strain on him that can at times be hard to deal with.

However, he has a strong support team that includes his parents, so he can focus on his game.

Here are our favorite quotes from Justin Thomas:

Justin is very competitive and has had to learn the value of patience and a calm approach to problem-solving.

Now that you know all about Justin Thomas’ net worth, here are some of the best success lessons to learn from Justin Thomas:

1. Patience Is Important To Help Get Through Tough Times

Justin believes that if you are patient enough, the ups and downs become easier to get through. This way, you can return stronger than ever.

2. Having A Support System Makes A Difference

Having people around you who push you to be your best and support you no matter what is important.

Justin is lucky to have a supportive family with a father who was able to help guide him to achieve his goals.

3. A Positive Attitude Is Key

Having a positive attitude is important because what you put out there is what comes back to you.

Justin strongly believes that you have to constantly project a positive vibe, otherwise you run the risk of succumbing to negativity.

Justin has made it to the top and looks set to remain there for the foreseeable future.

He was lucky enough to find something he loved doing and continues to pursue his dream of being a professional golfer, just like his childhood heroes.

His talents on the golf course and ability to mentally tough it out when the going gets tough have allowed him to earn a fortune and become one of the best golfers in the world.

As of November 2022, Justin Thomas’ net worth is estimated to be $30 Million.

What do you think about Justin Thomas’ net worth? Leave a comment below.