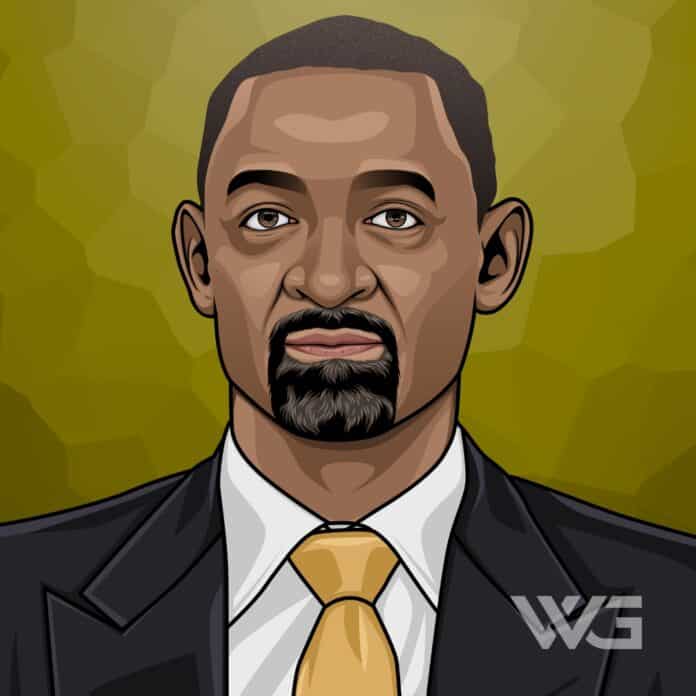 What is Juwan Howard’s net worth?

Juwan Howard is a former University of Michigan basketball All-American who was recruited by the Fab Five and became one of the best basketball players in the world.

After an already impressive career as a basketball player, he has now also made a name for himself as the coach of the Michigan Wolverines.

As of February 2023, Juwan Howard’s net worth is estimated to be $80 Million.

His mother, Helena, had Juwan when she was only 17 years old and, due to both his father Leroy Watson and his mother Helena being young, Helena’s mother adopted him.

He was brought up mainly by his grandmother, as both his parents didn’t visit him much.

Juwan attended Chicago Vocational Career Academy, where he discovered his love for basketball and played for the varsity basketball team.

Despite the lack of facilities at the school, Juwan was named a 1991 All-American by Parade magazine. Juwan wasn’t only the best in sports, but also academically gifted as well. He became homecoming king and was also a member of the National Honor Society.

During his sophomore year in 1988, he was named the best player in the Chicago metropolitan area. He had a great run at the Nike Academic Betterment and Career Development camp before being falsely accused of stealing his sneakers.

After many impressive performances during his high school years, Juwan attended the University of Michigan. This is where he was a part of forming the Fab Five, which consisted of Chris Webber, Jalen Rose, Jimmy King, Ray Jackson, and Juwan Howard.

Along with the Fab Five, Juwan was able to make a name for himself and was chosen as the fifth pick in the 1994 NBA Drafts by the Washington Bullets.

After a situation involving Juwan being left unsigned for his first month at the Bullets, he finally signed a six-year contract worth $24 million.

He received an opportunity to join the Miami Heat on a $98 million contract, but it didn’t happen as they miscalculated their salary cap. This helped his decision to re-sign a $105 million contract with the Washington Bullets.

Signing the deal made Juwan the first NBA player to sign a contract worth more than $100 million in NBA history.

During the 1996 – 1997 season, to raise awareness of gun violence, the Washington Bullets changed their name to the Wizards. Juwan then played with the Wizards up until the end of the 2000 to 2001 season.

He was traded by Michael Jordon to the Dallas Mavericks, becoming a key member of the team.

Howard played for the Denver Nuggets until 2003, when he signed a five-year contract with the Orlando Magic worth $28 million.

After playing for the Rockets until 2007, he was traded to the Minnesota Timberwolves but asked to be traded again due to differences with the team’s management.

He returned to the Mavericks for a short period and also played for the Nuggets, then retired from basketball to become an assistant coach for the Heat up until 2019.

Juwan then signed on as the head coach for the Michigan Wolverines on a five-year contract worth $11.2 million. Since becoming a coach, Juwan has won many awards and proven to be a brilliant coach.

Juwan joins other great athletes, as one of the richest NBA basketball players in the world who have gone on to a lucrative career after they stop playing.

Juwan Howard was the first NBA player to receive a $100 million contract over the course of his career and has earned more than $150 million.

In addition to his basketball salary, he also earned a substantial amount from various endorsement deals.

Following Juan’s exit from playing professionally, he stepped into the coaching role and earned the respect of his team.

After a few years, he took on the responsibility of coaching at his former club, and the brilliance he displayed on the court as a player helped him make a success of leading the club.

Juwan’s fortunes changed when he was contracted to the Michigan Wolverines men’s basketball team and became one of the Fab Five.

With his massive earning capacity, he was able to invest a huge amount of money and laid the foundation for his life-changing wealth.

Here’s a breakdown of Juwan Howard’s annual net worth:

With a net worth that is marching steadily higher, Howard is set for life while enjoying his job as head coach.

He has taken the same passion he had for playing and used it to create a second career as one of the NBA’s most successful coaches.

Juwan has a long dating history, which started with him courting Michigan’s Miss Basketball, Markita Blyden, in 1992.

In the same year, they had a son together named Juwan Howard Jr. However, the couple’s relationship did not last and they parted ways.

After Marita and Juwan broke up, he began dating Kristy Wilmot, with whom he had a daughter named Starr Howard. That relationship, unfortunately, ended too and Juwan moved on.

He married Jenine Wardally in 2002 and had two sons; Jace and Jet. Both sons are following in their father’s footsteps, pursuing higher education while playing in the basketball team at the University of Michigan.

Juwan also has two other children named Sky Howard and Joshua Howard, but details regarding their mother are not public knowledge.

Apart from his impressive skills on the basketball court, Juwan is also acknowledged as one of the most genuine and thoroughly nice players.

He’s been rewarded for his philanthropy as well as for his awesome coaching ability.

Here are some of the more memorable moments from Juwan Howard’s career:

Juwan has transitioned to coaching extremely well as his technical and tactical abilities are without question.

His recognition in 2021 as one of the best basketball coaches by the United States Basketball Writers Association is proof of his talent. He has joined Chauncey Billups, Charles Barkley, and Larry Bird as former players who’ve done well after moving on to coaching.

How Does Juwan Howard Spend His Money?

Giving back to his community is part of what makes Juwan such a popular basketballer.

He founded the Juwan Howard Foundation, which helps underprivileged children in Washington DC and Chicago.

Juwan has been awarded many times for his charitable contributions and continues to help causes across the country.

He also provides a free basketball camp for kids every year which is in collaboration with the Juwan Howard Foundation and the Chicago Public Schools.

Juwan purchased an $11.77 million property in South Florida Gables Estate where he intended to build a home with a dock for his yacht, named The Fab 5.

He also purchased a three-bedroom condo worth $2.55 million in the Trump International Hotel and Tower.

Howard is a great believer in the value of real estate and has also purchased a townhouse in River North for $490,000.

Juwan loves fast cars and drives one of the most expensive cars in the world, a Lamborghini Aventador.

When Juwan joined The Fab Five, he helped to define a turning point in NBA history, which was open of the reasons for his popularity.

While they never won an NCAA championship, their style and image carried over into the NBA and changed the look and feel of professional basketball forever.

Here are some of the best highlights of Juwan Howard’s career:

Now that Juwan has changed his look from the Fab Five’s trademark baggy shorts and black socks, he is rocking his job as head coach.

It looks certain that the Wolverines will continue their successful run with Juwan as their coach and mentor.

While Juwan Howard had an obvious talent for basketball, he still needed to work hard to maintain his place in the team.

He brings the same drive and determination to the Wolverine’s coaching job as he did when he represented them on the court.

Here are our favorite quotes from Juwan Howard:

Juwan views the game of basketball differently than most and spends a considerable amount of time analyzing both his team and their opponents.

This studious approach to the game lies at the heart of his success and bodes well for the future of his team.

Now that you know all about Juwan Howard’s net worth, here are some of the best success lessons to learn from Juwan Howard:

1. Mistakes Are Lessons To Be Learned

Juwan believes that no matter the mistake, rather than dwelling on it, use it as a lesson to improve yourself in the future.

He believes that even the best player can improve and each mistake is a ladder that they can use to become a better version of themselves.

To help those reach their dreams, it is important to use your power for good and not for selfish reasons.

Juwan takes his philanthropic role seriously and devotes a lot of his time each year to ensure that children get the opportunities that they deserve.

Juwan received lots of criticism for the way he behaved, but he never let it stop him from achieving his dreams.

He believes that standing up for yourself is one of the most important things you can do to achieve any goal you may have.

Juwan Howard has enjoyed a successful basketball career as a player and is working towards a memorable leadership position as a coach.

His love for basketball pushed him to work hard and to be the best he could be while becoming an inspiration to fans all over the world.

He is now making history with a whole new team that expects nothing less than for him to help them reach their championship goals.

As of February 2023, Juwan Howard’s net worth is estimated to be $80 Million.

What do you think about Juwan Howard’s net worth? Leave a comment below.