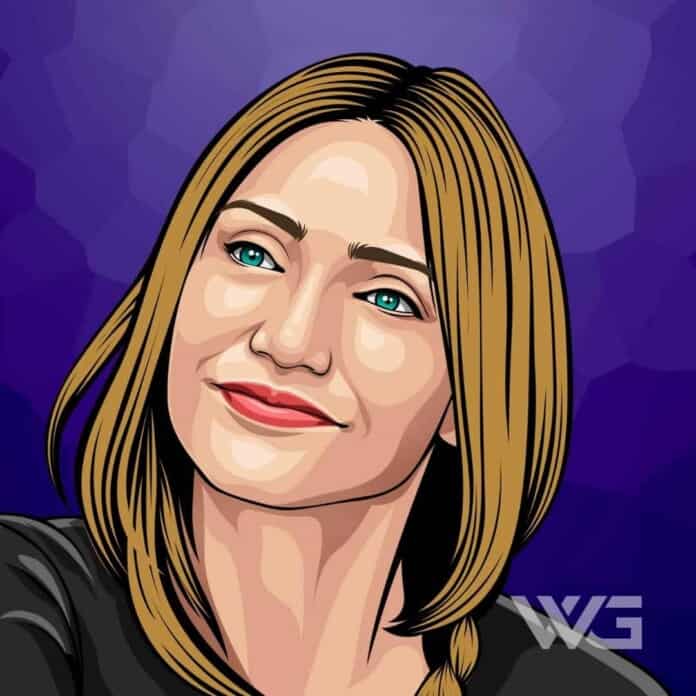 What is Cameron Diaz’s net worth?

As of February 2023, Cameron Diaz‘s net worth is estimated to be roughly $140 Million.

Cameron Michelle Diaz is a retired American actress, author, producer, and fashion model from San Diego. Diaz’s breakthrough role came in 1994 when she starred in ‘The Mask’ alongside Jim Carrey.

Cameron Michelle Diaz was born in San Diego, California on the 30th of August, 1972. Diaz has an elder sister named Chimene. Her father’s family is Cuban, and Diaz’s ancestors had originally moved from Spain to Cuba.

Diaz mother, Billie was an import/export agent, and her father, Emilio Diaz, worked for the California oil company ‘Unocal’.

Diaz’s career began when she turned 19 years old. She first starred in the adult movie titled ‘She’s No Angel’.

In 1994 she was one of the main cast in the superhero fantasy film ‘The Mask’ alongside comedian and actor Jim Carrey. The outstanding performance earned her a Golden Globe nomination.

In 1997, Diaz starred in ‘My Best Friend’s Wedding’ where also stars like Julia Roberts, Dermot Mulroney, Rupert Everett, and Philip Bosco starred in. Diaz delivered an award-winning performance for that movie.

One year later, Diaz was seen in the movies ‘Fear and Loathing in Las Vegas’, ‘Very Bad Things’ and the award-winning film ‘There’s Something About Mary’.

In 1999, Diaz appeared in the Golden Globe-nominated film ‘Being John Malkovich‘ and was also seen in the film ‘Things You Can Tell Just by Looking at Her’.

In 2008, Diaz starred in one of her most popular movies ‘What Happens In Vegas’; a romantic comedy film starring Ashton Kutcher. She also starred in the film ‘My Sisters Keeper’ which was based on Jodi Picoult’s novel of the same year.

Since then Diaz has been delivering some of the most popular movies for many decades. She has been starring in films such as ‘What to Expect When You’re Expecting’, ‘A Liar’s Autobiography’, ‘Gambit’ and ‘The Counselor’.

The actress’ last-on screen appearance was in 2014’s ‘Annie’ and she later confirmed for media that she’s finished with the acting side of her career.

Aside from the people mentioned above, Diaz has also worked with stars such as Tom Cruise, Justin Timberlake, Jason Segel, Jack Black, and Eddie Murphy.

Here are some of the best highlights of Cameron Diaz career:

“I’m someone who loves to enjoy life and tries to focus on real things and real friendships. That’s why I live very simply. I’m a jeans and T-shirt kind of girl. I don’t spend much time fixing myself up or trying to look cool. I live like a normal person and even though I’m in a very high-profile business, I really don’t let it affect the way I live.” – Cameron Diaz

“My Latin roots are very strong. All my life, because I’m blonde and blue-eyed, people who aren’t Hispanic can’t believe I am. And people who are Hispanic always think I’m not because I don’t look like them. Being Latin is part of who I am and I bring that part to every role.” – Cameron Diaz

“I am just at that stage of wondering where I go from here. I came into this business almost by accident, but now it has become serious. What started as a bit of fun, something to do other than be a model has taken on a different career curve. I have been forced to ask where that curve is going to end up.” – Cameron Diaz

View our larger collection of the best Cameron Diaz quotes!

How much is Cameron Diaz worth?

Cameron Diaz’s net worth is estimated to be $140 Million.

How old is Cameron Diaz?

How tall is Cameron Diaz?

Cameron Diaz has been a popular actress for many decades. She has worked around some of the best actors in the world and there’s no doubt that she will remain as the title of one of the best actresses of all time. Diaz is a retired actress and has quoted:

What do you think about Cameron Diaz’s net worth? Leave a comment below.