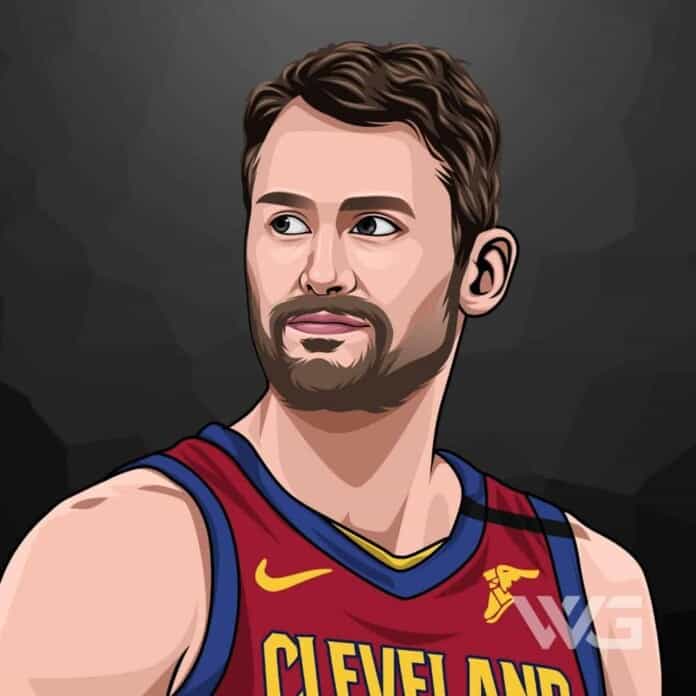 What is Kevin Love’s net worth?

Kevin Love is an American professional basketball player. Love plays for the Cleveland Cavaliers of the NBA.

Kevin Wesley Love was born on the 7th of September, 1988, in Santa Monica, California.

Love is the second of three children to Karen and Stan Love. He grew up in Lake Oswego, Oregon, where he was childhood friends with fellow future NBA star Klay Thompson.

Love played basketball from his earliest days; as a child, he would practice his bounce passes with a cardboard box and study tapes of Wes Unseld. His father further helped brush up his ball maneuvering and shooting skills.

In a press conference on April 17, 2008, Love announced his intention to leave UCLA to enter the 2008 NBA draft. Love was taken fifth overall by the Memphis Grizzlies, immediately after his teammate at UCLA.

He went on to play in the 2008 NBA Summer League and led all players in rebounding. In his NBA debut on October 29, Love came off the bench to contribute 12 points and nine rebounds in a 98–96 win over the Sacramento Kings.

During the 2010–11 season, Love established the longest streak for consecutive games, recording double figures in points and rebounds since the ABA–NBA merger.

The Timberwolves trade of Jefferson before the 2010–11 NBA season was expected to result in more playing time for Love. However, he averaged 28 minutes through the first nine games, exceeding 30 minutes only twice.

In 2017, Love was named an Eastern Conference All-Star reserve for the 2017 NBA All-Star Game. However, on February 14, 2017, he underwent arthroscopic surgery to remove a loose body from his left knee and was subsequently ruled out for approximately six weeks.

How Does Kevin Love Spend His Money?

Kevin Love spends some of his money on real estate.

Love owns a beautiful apartment in New York. It comes in a modern style.

Here are some of the best highlights of Kevin Love’s career:

“I think any time you have Phil Jackson involved in any organization, you’re going to look at it definitely, and it’s definitely intriguing. The Knicks are definitely a place where anybody would like to go.” – Kevin Love

“When you’re on the court, there are certain things that you would do that you wouldn’t do off the court. You get off. You obviously have to be a gracious and humble person. When you are on the floor, be a team player. Championships are what you are defined by – legacy. Go about things the right way.” – Kevin Love

“I was lucky. A lot of people have that. People that don’t tell you what you want to hear, but what’s best for you. I was blessed with great friends. I was always blessed that way. My dad always kept good people around me. I just got lucky. Because of the spotlight, you’re in. People are scared to tell you otherwise.” – Kevin Love

“The more downtime we have, the more time you have to play games like ‘Ghost Recon Future Soldiers,’ so for me it’s a fun way to get integrated into video games and for me to have fun with my buddies and team up and go into battle with ’em, kind of like out there on the court.” – Kevin Love

“Luckily, I’m young, and I have a great training staff that helps me take care of my body day in and day out. You make sure you’re eating right. Make sure you’re hitting the iron, lifting as much as you possibly can. That’s easier said than done because we don’t have many practice days.” – Kevin Love

Now that you know all about Kevin Love’s net worth and how he achieved success; let’s take a look at some of the lessons we can learn from him:

Act as if what you do makes a difference. It does.

Success is not final. Failure is not fatal: it is the courage to continue that counts.

Never bend your head. Always hold it high. Look the world straight in the eye.

How much is Kevin Love worth?

Kevin Love’s net worth is estimated to be $100 Million.

How old is Kevin Love?

How tall is Kevin Love?

Kevin Love is an American professional basketball player who was ranked as one of the top players in the nation from the class of 2007.

He was named the Pac-10 Conference Player of the Year and consensus First Team All-American following the season.

He was also a gold-medal-winning United States national team member at the 2010 FIBA World Championship.

What do you think about Kevin Love’s net worth? Leave a comment below.