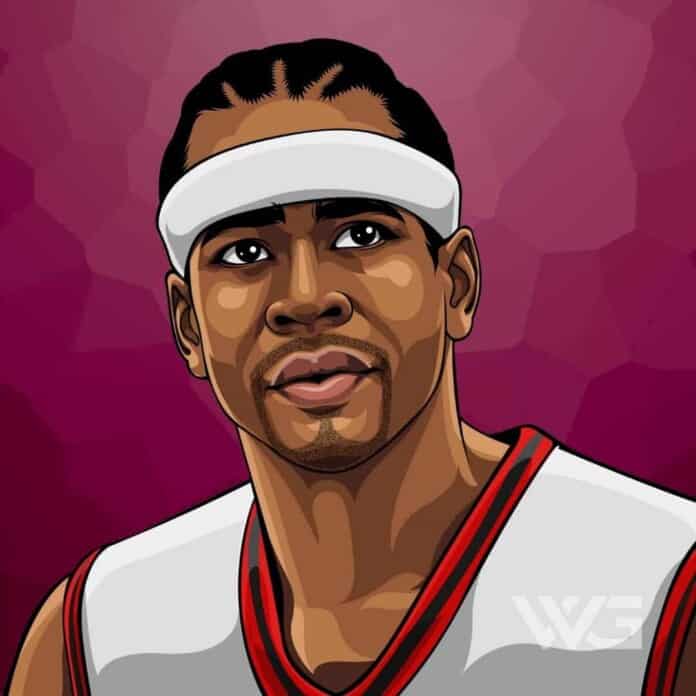 What is Allen Iverson’s net worth?

As of November 2022, Allen Iverson’s net worth is roughly $1 Million.

Iverson played for 14 seasons in the NBA at both the shooting guard and point guard positions.

Allen Ezail Iverson was born on the 7th of June, 1975, in Hampton, Virginia.

His father Allen Broughton had abandoned his mother. He went to the Bethel High School, Hampton, Virginia, U.S

As he served a sentence in a correctional facility for the bowling riots case in 1993, he finished his high school education at Richard Milburn High School, a school for at-risk students.

Iverson was selected for the NBA draft by the Philadelphia 76ers in 1996. Before the 1999-2000 season, he signed a six-year contract extension for a sum of $70 million.

The Philadelphia 76ers qualified for the playoffs, in which he averaged 26.2 points, 4.8 assists, 4 rebounds and 1.3 steals per game.

In the 2000 off-season, he had many disagreements with the coach, Larry Brown and the team attempted to trade him to Detroit Pistons. However, player Matt Geiger did not forfeit the $5 million trade kicker.

In 2009, Iverson signed a contract with the Memphis Grizzlies team for 1 year.

The same year, he returned to play for the Philadelphia 76ers and was welcomed into the team. However, the following year he left the team stating health issues of his daughter as the main reason. It was later announced that he would not return to the team.

Here are some of the best highlights of Allen Iverson’s career:

“Don’t nobody wanna talk about or hear about somebody donating money to a charity. You wanna hear about what Bin Laden is doing and what you think is on his mind.” – Allen Iverson

“Either you give in, or you fight. That’s all I know, being where I’m from. You fight for what you want. You go after what you want. The only thing I could do was give up or keep fighting for what I wanted in life.” – Allen Iverson

“I believe that whatever we have, regardless of a trade being done or not, I feel we have a shot. I’ve just got to believe that we’re going to be all right. I’ve got to just play basketball.” – Allen Iverson

“I didn’t take constructive criticism the way I should have. When I finally caught up to that, that’s when I went to being the MVP.” – Allen Iverson

“I may not know everything about physical talent or anything like that, but I have a sharp mind when it comes to that look: being able to look into somebody’s eyes to tell if they are going to be in the foxhole with you tonight, or if they are not.” – Allen Iverson

Now that you know Allen Iverson’s net worth; Let’s take a look at some of the best lessons we can learn from him:

1. You Can Never Truly Be Yourself. You Have to To “Vanilla” Yourself

What does it mean to vanilla yourself? It means to dumb down anything that is extreme about your brand. In other words, anything that is loud/flashy or just downright off-putting about yourself, you need to neutralize it. Stupid people think “just be yourself” or “fuck what anybody thinks”.

Smart people know that certain situations require adjustments in how you talk, how you dress, and how you behave. Unfortunately, Allen Iverson could never grasp this important lesson. You could take him out of the hood but you couldn’t take the hood out of him.

2. Incredible Talent is Both a Gift and a Curse

He knew just how much of an impact he made. Unfortunately, he also knew that because of his incredible value, he was a powerful man and that he could “get away” with a lot.

Everyone always throws out those cliché lines. “The past is the past.” “Don’t judge anyone on the past.” I’ve got news for you.

The past is one of the main things people use to judge others. If someone has a history of poor behavior, what are the chances they are going to exhibit poor behavior in the future? Pretty high.

Throughout his entire playing career, Allen Iverson was all about Allen Iverson. You could label him as a trouble maker or a locker room cancer. Great team chemistry was not possible because it was all about him and what he wanted.

How much is Allen Iverson worth?

Allen Iverson’s net worth is estimated to be $1 Million.

How old is Allen Iverson?

How tall is Allen Iverson?

Allen Iverson has been rated by ESPN as the 5th greatest NBA shooting guard of all time.

During his NBA career, he was the top scorer four times between 1998 and 2005 and holds the record for the 2nd highest per game scoring average behind Michael Jordan.

As of November 2022, Allen Iverson’s net worth is approximately $1 Million.

What do you think about Allen Iverson’s net worth? Leave a comment below.