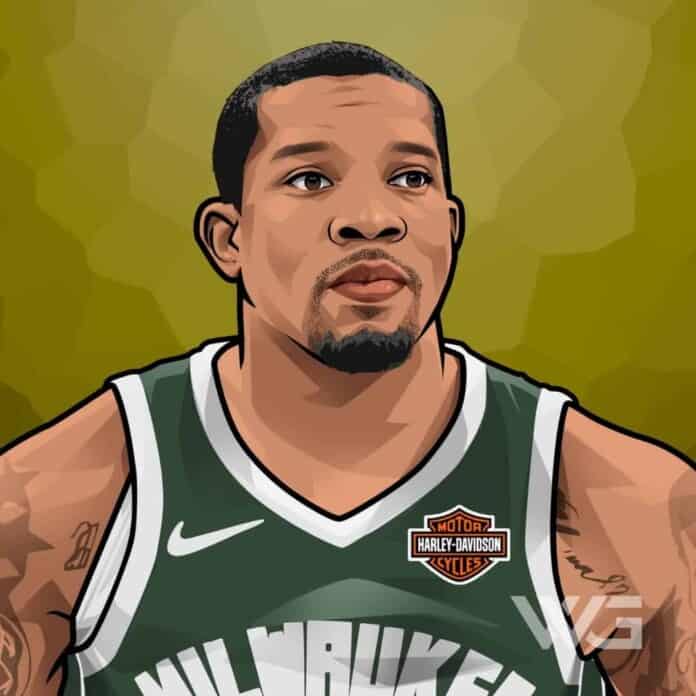 What is Eric Bledsoe’s net worth?

As of December 2022, Eric Bledsoe’s net worth is approximately $14 Million.

Bledsoe is the son of American parents Eric Bledsoe Sr. and Maureen Reddick.

He attended Parker High School in Birmingham, Alabama. Bledsoe played one season at Kentucky in 2009–10 and averaged 11.3 points, 3.1 rebounds, and 2.9 assists in 37 games to help the Wildcats to a 35–3 record and Elite Eight appearance.

Bledsoe was subsequently selected with the 18th overall pick in the 2010 NBA draft by the Oklahoma City Thunder but was later traded to the Los Angeles Clippers in 2010.

While his first season with the club, he averaged 6.7 points and 3.6 assists and started 25 games for the team, and was named to the NBA All-Rookie Second Team.

Bledsoe was traded to the Phoenix Suns alongside teammate Caron Butler on 10 July 2013. He made his club debut in a match against Portland Trail Blazers. He helped his team by getting 22 points, 6 rebounds, and 7 assists in a 104-91 victory.

Bledsoe also got his career first double-double with the Suns by scoring 16 points, grabbing 11 rebounds, and putting up 7 assists in a blowout 117-90 victory over the Los Angeles Lakers on December 23, 2013.

He was then traded to the Milwaukee Bucks in exchange for Greg Monroe and a protected first, and second-round draft pick on 7 November 2017.

As of December 2022, Eric Bledsoe’s net worth is estimated to be roughly $14 Million.

How Does Eric Bledsoe Spend His Money?

Eric Bledsoe spends some of his money on his real estate in Arizona.

Here are some of the best highlights of Eric Bledsoe’s career:

“The losing just kept building up, we had a great group of guys, but we were young, and I feel like my bad habits were draining [my effectiveness].” – Eri Bledsoe

“I had a great season last year, but it was just one bad series. And everybody noticed. I thought it would be easy because we were playing so well at the end of the season. It was about respecting your opponents, too, because I wasn’t prepared to go in.” – Eric Bledsoe

“The people who watch you on the court often don’t know you as an actual person — a human being. Just because you are living the dream of making millions of dollars doesn’t mean you don’t go through problems. I don’t let stuff like that get to me and affect me.” – Eric Bledsoe

“My daughter, she loves gymnastics. I take her to gymnastics and watch her compete. It’s fun to see something you have rub off on your kids. My son, as much as I love to get away from the game, really does love basketball. He wants to shoot on this little hoop I got him. It’s just awesome to see them smile all the time.” – Eric Bledsoe

“Before I joined the Clippers, I played basketball at the University of Kentucky. There the game of basketball is significant. It is important for the fans. There is not a lot to do there, so they really support the team. It is hard to describe. The fans, the coaching staff, the basketball program is everything, and the kids who go there love it.” – Eric Bledsoe

Now that you know all about Eric Bledsoe’s net worth and how he achieved success; let’s take a look at some of the lessons we can learn from him:

Believe in yourself, take on your challenges, dig deep within yourself to conquer fears. Never let anyone bring you down. You got to keep going.

If you can’t do anything about it, then let it go. Don’t be a prisoner to things you can’t change.

3. Start Where You Are

How much is Eric Bledsoe worth?

Eric Bledsoe’s net worth is estimated to be $14 Million.

How old is Eric Bledsoe?

How tall is Eric Bledsoe?

Eric Bledsoe is an American professional basketball player for the Phoenix Suns of the NBA. He plays the point guard position but can also play shooting guard, and he is considered one of the best shooting guards in the league.

Bledsoe was touted for his quickness, ball-handling ability, and ability to make three-point field goals. He was subsequently selected with the 18th overall pick in the 2010 NBA draft.

As of December 2022, Eric Bledsoe’s net worth is estimated to be $14 Million.

What do you think about Eric Bledsoe’s net worth? Leave a comment below.

What is Dan Bilzerian's net worth? Introduction As of ,...