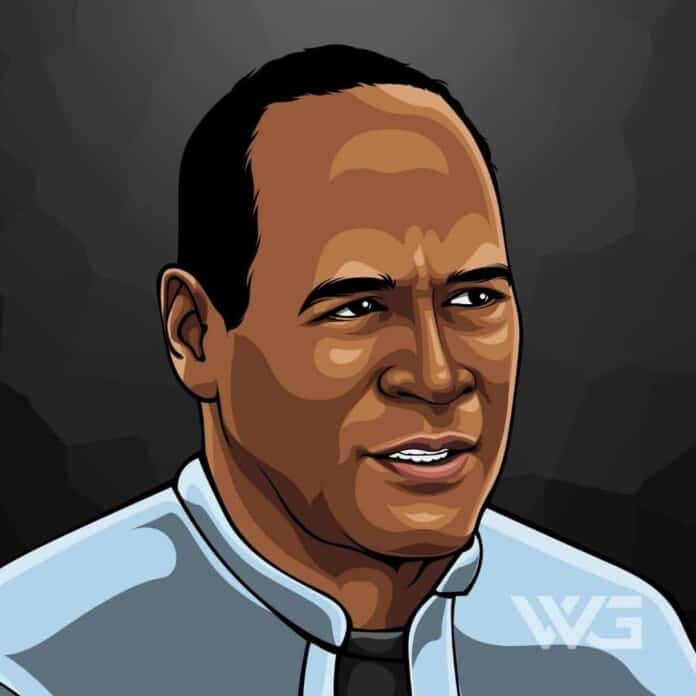 What is OJ Simpson’s net worth?

Orenthal James Simpson, better known as “OJ Simpson”, is an American former football running back, broadcaster, actor, advertising spokesman, and defendant in what has been described as the “trial of the century”.

Orenthal James Simpson was born on the 9th of July, 1947, in Putrero Hill, California. His father was a chef and bank custodian and his mother was a hospital administrator.

In 1952, his father left the family when he was still very young and his mother had to take responsibility of raising the four children.

Simpson’s professional career in football started after he joined the ‘Buffalo Bills’ in 1969. The Sport magazine named him ‘Man of the Year’. For five consecutive years from 1972 to 1976, O.J. Simpson topped 1,000 yards rushing.

He made a successful endeavor in films while continuing with his professional football. Some of his films of the 1970s include ‘The Towering Inferno’, ‘The Klansman’ and ‘Capricorn One’.

He was charged of murdering his ex-wife Nicole Brown Simpson and her friend Ronald Goldman on June 12, 1994. He was exonerated of the charges following a lengthy criminal trial, the ‘People v. Simpson’ in 1995.

Later in 1997 a civil court held him liable and passed an order against him to pay compensatory and punitive damages amounting to $33.5 million.

On December 4, 2001, the FBI searched his Miami house suspecting possession of drugs and money laundering. Though no illegal drugs were found, the investigators discovered equipment that can be used to steal satellite television programming and were sued in federal court for such action.

In September 2007, he was arrested in Las Vegas with several charges including kidnapping, criminal conspiracy, assault, and armed robbery, and after trial on December 5, 2008, he was sentenced to 33 years of imprisonment.

The judgment includes a no-parole condition for a minimum of 9 years. Presently he is imprisoned in the ‘Lovelock Correctional Center’.

Here are some of the best highlights of OJ Simpson’s career:

“Nicole will come up in conversations where it’s in a part of the conversation. Or we may be somewhere and I would tell some story about their mother and I. You know, we always honor her birthday.” – OJ Simpson

“Yes, I have. I respect the knowledge of the psyche. I would be a therapist if I weren’t an entertainer. Hopefully, mine and Nick’s story will continue for the rest of our lives, like what we vowed, through sickness and in health.” – OJ Simpson

“What they have represented makes a win against them very special. We have tremendous respect for them. We also know that one win doesn’t make a statement. You have to do things over time. Santa Barbara’s the team that’s done it over time.” – OJ Simpson

“Seniors, the disabled, the mentally ill, people on life-saving transplant rejection drugs – the least medically secure have been the most affected. At least now with a state emergency declared no one will walk out of the pharmacy without the medications they need.” – OJ Simpson

Let’s take a look at some of the lessons we can learn from OJ Simpson:

This one is so obvious. We’ve long accepted the social reality that wealthy people eat better food, live in more comfortable houses, and get better medical care.

2. You Cannot Know Your Place in History

Yet your moment will come. Have faith.

It’s the same as you can’t please everybody. Yet, the world does not end there.

How much is OJ Simpson worth?

OJ Simpson’s net worth is estimated to be $3 Million.

How old is OJ Simpson?

How tall is OJ Simpson?

OJ Simpson is a former American football player, commentator, and actor. He holds the record of being the first player to cover over 2000 yards in a season.

His yards-per-game average of 143.1 in a single season is also a record. He is presently a convicted felon confined at the ‘Lovelock Correctional Center’ in Nevada serving a sentence of 33 years of imprisonment without parole for a minimum of 9 years.

What do you think about OJ Simpson’s net worth? Leave a comment below.

Former professional racing driver Nigel Mansell has earned millions as both a Formula One and Indy Car World Series champion.