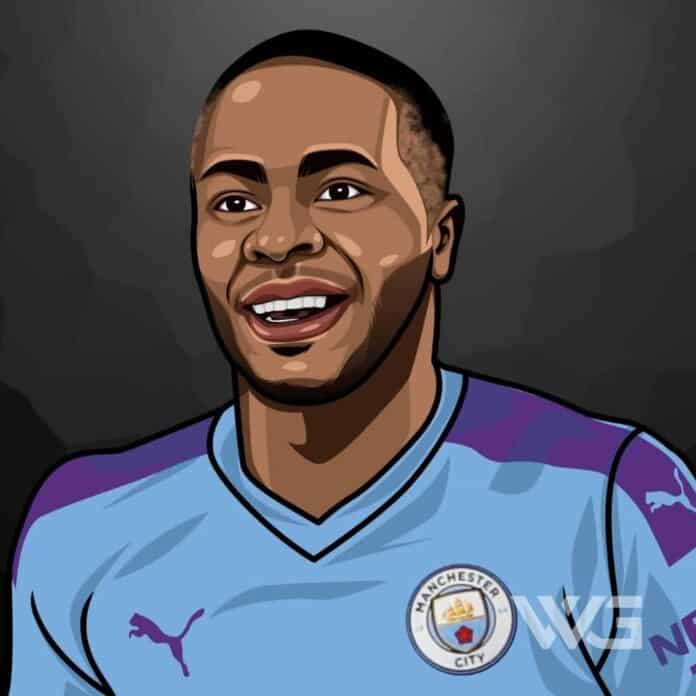 What is Raheem Sterling’s net worth?

Raheem Sterling is an English professional footballer who plays as a winger and attacking midfielder for Premier League club Manchester City and the England national team.

As of February 2023, Raheem Sterling’s net worth is approximately $45 Million.

Raheem Shaquille Sterling was born on the 8th of December, 1994, in Jamaica.

Raheem and his family underwent many hardships to manage their expenses. His mother somehow managed to make both ends meet.

Raheem was then a student of Copland Community School in Wembley, North West London, and was playing for the school’s football team.

Raheem played for ‘Queens Park Rangers Football Club’ from 2003 to 2010. This seven-year-long span helped him a lot in shaping his career. At the end of his tenure with the club, Raheem was already a star player.

In 2010, Raheem signed a contract with ‘Liverpool’ and was initially offered 600,000 Euros. The then ‘Liverpool’ coach Rafael Benítez promised to pay him more provided he plays most of the matches for Liverpool’s youth team.

Raheem registered his first victory against ‘Notts County F.C’ while playing in the Football Association Youth Cup. After a few more remarkable victories, Raheem was promoted to the senior team of Liverpool.

He then decided to play for ‘Manchester City’ after signing a five-year contract worth 44 million Euros. The first match that he played for the club was against ‘A.S. Roma’ at the 2015 International Champions Cup.

Sterling became the team’s best performing player after a 2-1 victory over Italy in FIFA 2014. Raheem was signed as the brand ambassador for the limited edition series of Nike Mercurial Vapor IX.

Here are some of the best highlights of Raheem Sterling’s career:

“Make the boys go off to the World Cup with a clear head, that everyone is behind them and everyone is with them, and trust me: I think you would definitely see a better England.” – Raheem Sterling

“When it rains, nobody hides inside. You just go out and enjoy it. The other thing I remember is begging my grandmother for money to go and get a grapenut ice cream.” – Raheem Sterling

“There’s a perception in certain parts of the media that I love ‘bling.’ I love diamonds. I love to show off. I really don’t understand where that comes from.” – Raheem Sterling

“If people want to write about my mum’s bathroom in her house, all I have to tell you is that 15 years ago, we were cleaning toilets in Stonebridge and getting breakfast out of the vending machine. If anybody deserves to be happy, it’s my mum.” – Raheem Sterling

Now that you know all about Raheem Sterling’s net worth, and how he achieved success; let’s take a look at some of the strongest lessons we can learn from him:

In his playing days at Liverpool, Sterling was often found making fine runs and finding space only to miss a golden scoring opportunity or fail with the final pass.

Under manager Josep Guardiola’s tutelage at Manchester City and through maturity, Sterling found the self-belief and confidence to back himself. 25 goals this season are a testament to that.

Many of Sterling’s trademark goals have seen him popping up at the far post to tap from short range. This stems from his willingness to run those extra yards which gives him the edge over his peers.

Sterling takes risks. When he called out the British sports media for ‘fuelling racism’ he risked a huge backlash from a powerful group of people. But his comments were qualified and substantiated and, in the end, no one could argue.

The risk paid off and there hasn’t been a negative word written about the player ever since.

How much is Raheem Sterling worth?

Raheem Sterling’s net worth is estimated to be $45 Million.

How old is Raheem Sterling?

How tall is Raheem Sterling?

Raheem Sterling is the winner of the 2014 ‘Golden Boy’ award, and he is often considered a wonder boy.

From playing for ‘Queens Park Rangers F.C’ to representing England in the FIFA World Cup 2014, Raheem has had an incredible journey so far.

As of February 2023, Raheem Sterling’s net worth is roughly $45 Million.

What do you think about Raheem Sterling’s net worth? Leave a comment below.