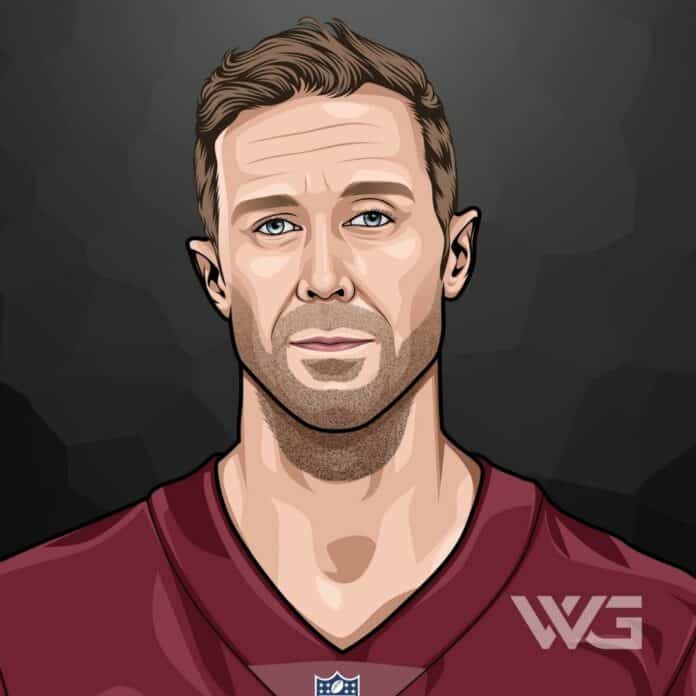 What is Alex Smith’s net worth?

Alex Smith is acknowledged as one of the best NHL players, running out for the Washington Redskins, the San Francisco 49ers, and the Kansas City Chiefs during his career.

Despite a life-threatening injury, he returned to the field and ended his footballing career in 2021 as one of the best quarterbacks ever with an impressive investment portfolio to his name.

Alexander Douglas Smith was born May 7, 1984, in Bremerton, Washington.

Alex attended Helix High School where his father worked as the executive director. While at school, Alex joined the Helix Highlanders and played football throughout his junior and senior years.

Despite his impressive achievements in sports, he still focused on his studies and eventually got into the University of Utah. He joined the university’s football team, the Utah Utes, and led them to many victories. The highlights of his university football career were the 2005 Fiesta Bowl and the 2003 Liberty Bowl.

After two years, Alex graduated with a bachelor’s degree in economics. But he wasn’t finished with his education, going on to work toward his master’s degree. However, this came to an end once he received the news that he was one of the first to be drafted by the San Francisco 49ers.

Alex’s start with the 49ers was incredibly successful, right up until he suffered injuries that resulted in his coach taking him out of the lineup for a while.

After a difficult first season, he started the 2006 to 2007 season off on a good note. That season was the year he started working hard toward improving his game.

While working alongside his new coordinator, Alex was able to lead his team to many more victories. During the season, he scored a total of 16 touchdowns and became the first quarterback to take every snap throughout the entire season.

After a great beginning to the 2007 season, Alex struggled with another injury during a match against the Seattle Seahawks. The injury ultimately resulted in Alex being unable to throw accurately. He underwent surgery and had to sit out for the rest of the season.

After he returned, he suffered from multiple injuries throughout the 2008 season.

This did not stop the 49ers from renewing Alex’s contract for the 2009 season. This season showed lots of promise for Alex, and he ended the year with a total of 18 touchdowns.

His prior season success led to him being selected as the starter quarterback for the first time in the 2010 season.

After suffering a shoulder injury, Alex became a free agent and signed with the 49ers once again in 2011.

He was traded to the Kansas City Chiefs in 2013 and at the end of his first year, reached a record of 26 touchdowns for the season.

He was traded to the Washington Redskins in 2018 and, after leading the team to a 6-3 record, he suffered a life-threatening leg injury.

Alex returned to football in 2020 after two years of rest but suffered from serious bone bruises because of his previous injury. Despite his injury and after a successful season, he decided to retire in 2021.

Alex joins the ranks of the richest NFL players, which includes some of the greats, like Sam Bradford, Antonio Brown, and Tom Brady; the highest-paid footballers in history.

Alex’s football career was a series of amazing highs followed by devasting lows. But through the good and the bad, he stayed focussed on being the best footballer he could be.

After being signed as one of the highest-paid stars, it is little wonder that Alex was able to amass the fortune he has.

As one of the wealthiest football stars in the NFL, Alex has managed to become very wealthy by investing his earnings wisely.

Here’s a breakdown of Alex Smith’s annual net worth:

Now that he is retired, he is focussing on other business interests and his fortune will no doubt continue to increase with his careful money management.

While it may sound like a cliché, Alex married former cheerleader, Elizabeth Barry in 2009.

The couple had three children but, unfortunately, the same bad luck that dogged Alex’s football career followed his family. Alex has gone through a lot of heartache, having to stay strong as his daughter, Sloane, underwent surgery due to a brain tumor.

Alex is a very involved father who feels that having children has changed him for the better. His contract with ESPN has allowed him to spend plenty of quality time with his family, which is important given his daughter’s health concerns.

Alex has enjoyed a spectacular career, winning some of the most prestigious awards in the NFL.

He is respected for his never-say-die attitude, having made a fantastic comeback after a potentially career-ending injury to his leg.

Here are some of the more memorable moments from Alex Smith’s career:

With his playing days behind him, Alex is set to follow a media career behind the microphone as well as spend time on his other business interests.

How Does Alex Smith Spend His Money?

Alex spends big when it comes to philanthropy, setting up his foundation in 2007.

He has also released a clothing line that donates its profits to a rehabilitation center.

His down-to-earth approach and family values are much admired and it’s unlikely that he’ll be spending money on the most expensive cars in the world, preferring a more normal mode of transport for his family.

Alex has captained some of the most successful teams in the NFL, winning championships and overcoming severe injuries to become recognized as one of the all-time greats.

His ability to focus on the game and shut out the pain of injury and personal tragedy is what makes him a true champion.

Here are some of the best highlights of Alex Smith’s career:

Alex Smith was understandably one of the highest-paid athletes in the world, having earned more than $100 million throughout the course of his career.

The standout feature of Alex’s football legacy is his determination to get back out on the field and play football.

Overcoming serious injuries and coming back after being side-lined showed his true spirit and character, which serves as an inspiration to his team and those players that came after him.

Here are our favorite quotes from Alex Smith:

Alex was always looking for a way to keep going, even when things got tough. He viewed every obstacle as something to get through and overcome on his way to winning.

Now that you know all about Alex Smith’s net worth, here are some of the best success lessons to learn from Alex Smith:

Don’t waste your time dwelling on the past and on things you cannot change. Moving forward is the only way to put everything you have into what you want to do or become.

2. Always Do Your Best To Keep Your Calm

It is best to stay calm in difficult situations rather than lose your cool and regret it later.

3. Push Through The Obstacles

Alex had to face many obstacles but always found a way to push through and come back even stronger and more focused.

Known for being one of the best comeback footballers and for breaking records, Alex is a legend in the football world.

He is one of the best quarterbacks to hit the field in NHL history and even with multiple injuries throughout his career, he still managed to come out on top.

After 16 seasons of playing for the NFL, Alex and his family are now enjoying the luxurious life that he worked so incredibly hard for.

What do you think about Alex Smith’s net worth? Leave a comment below.