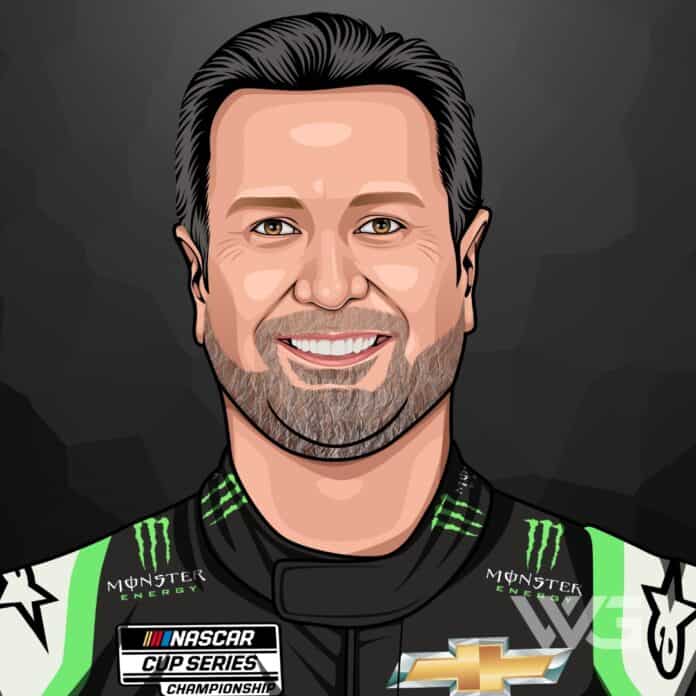 What is Kurt Busch’s net worth?

Kurt has earned almost $90 million in his racing career just from prize money and has made a sizable sum of money from endorsements and real estate investments.

His mother worked at a public school, and his father was a salesman. Kurt started going to the racetrack with his father and participating in go-kart racing when he was only six years old.

When he was fourteen years old, he entered his first competition, competing at the Pahrump Valley Speedway in a dwarf vehicle. His father was highly supportive of his desire to race and allowed him to participate as long as he kept up his academic grades.

He competed in modified stock car racing while still a teenager, and he won his second race at the Las Vegas Speedway Park. He and his father competed in races as they toured the southwest while Kurt Bush was his older brother.

After graduating from Durango High School, Kurt enrolled at the University of Arizona to pursue his dream of becoming a pharmacist. But, he stayed for less than a year before the pull of NASCAR resulted in him leaving to concentrate on his racing career.

Busch gained notoriety during the 1990s for his aggressive approach to winning, which led to him being approached to join the Star Nursery team.

Kurt joined them and raced in the semi-pro NASCAR Featherlite Southwest Series, taking first place. After an eventful season, he and the Star Nursery group took home the Southwest Tour Championship in 1999.

He participated in the Craftsman Truck Series in 2000, a NASCAR series designed specifically for rookie drivers. He finished second in the series point standings that year after winning four races as the youngest driver in the series.

His standings and ranking in the Winston Cup Series significantly improved in 2002. He finished the season with four victories, twelve top-five finishes, and twenty top-ten finishes.

He wouldn’t return to the top 10 until the 2005 campaign, in which he earned the most points and placed tenth. Kurt joins Carl Edwards,  Denny Hamlin, and Cale Yarborough as one of the most talented drivers to have competed in NASCAR events.

After a satisfying contract, Kurt left Roush Racing in 2005 and joined Penske Racing in 2006. After his final season at Penske, Kurt joined Phoenix Racing, moving on to Furniture Row Racing the following year, and then spent 5 years at Hass Racing.

In 2019, he signed with Chip Ganassi Racing, but 2 years later he moved again to take up a position at 23XI Racing.

Kurt went out to the Sebring International Raceway in 2003 to test an open-wheeler for the CART champion Bobby Rahal, one of the richest racing drivers in the world and a three-time champion.

In 2013, Kurt tested an IndyCar for the Andretti Autosport team, an outfit owned by CART champion Michael Andretti, at the Indianapolis Motor Speedway.

Kurt attempted, in 2014, to qualify for the Indianapolis 500 and the Coca-Cola 600 for the Andretti Autosport team.

He was ultimately unsuccessful after his engine blew up in the second race on lap 273.

Kurt’s career has not been short of controversy due to his short temper and a run-in with the Maricopa County sheriff’s department saw him lose his ride after a drunk driving charge.

He and his brother Kyle Busch also had a serious altercation after the two made contact and crashed at the 2007 NEXTEL All-Star Challenge. The event was eventually won by Kevin Harvick, who sailed past the feuding brothers.

Here’s a breakdown of Kurt Busch’s annual net worth:

Kurt Busch’s volatile nature often overshadowed other events on race day and his antics often resulted in crashes and serious damage to cars.

He was also fined by NASCAR for dangerous driving in the pit lane, endangering officials and crew, and generally behaving dangerously.

Busch has engaged in a lot of disputes and rivalries with other drivers, and in 2006, behind Tyrell Owens and Barry Bonds, one of the richest baseball players in the world, he was ranked the third most despised athlete.

What NASCAR had failed to do during his career,  Kurt accomplished by having his ears pinned back closer to his head via cosmetic surgery, in 2006.

Since 2017, he has been wed to Ashley Van Metre, who appeared in the 2019 season of the reality series “Racing Wives” on CMT.

Despite his career being successful, it has not been without controversy, having been detained in Maricopa County, Arizona, in 2005 on suspicion of drunk driving.

His sobriety test results were withheld by the sheriff’s office because they said their equipment was faulty and he was disqualified from the season’s final two races by Roush Racing.

He accidentally collided with driver Jimmie Johnson at the 2011 Richmond Races, and Johnson responded in the following race.

Busch became enraged when questioned by a reporter about the rivalry and had to be restrained and was placed on probation by NASCAR until December 2012.

Due to domestic abuse charges filed by his ex-girlfriend, he was suspended by NASCAR in 2015. No charges were brought, and after he finished the reinstatement program many months later, his suspension was lifted.

The list of drivers that have been the target of Kurt Busch’s anger is long and distinguished, with his altercation with Dale Earnhardt Jr. at the Daytona 500 in 2001, being one of the most notable.

Following repeated niggling and crashes during various races, Spenser had enough and punched Kurt in the face, causing enough damage to ensure he ended up in the hospital.

Here are a few of the most significant events in Kurt Busch’s career:

Busch was involved in an incident at Charlotte, in 2002, during the Winston, with Robby Gordon.

Busch drove into Gordon’s No. 31 Chevy towards the end of the race, causing Gordon to spin out and crash into the wall.

He ended up paying NASCAR a fine of $10,000 for his intentional contact, later remarking that he “hated to use Robby as a caution.”

How Does Kurt Busch Spend His Money?

Kurt purchased a 9,500-square-foot lakefront mansion in Mooresville, North Carolina, for $3.29 million in 2013.

He listed a 138-acre undeveloped parcel nearby the mansion mentioned above for $7.6 million in 2019 but withdrew the listing in February 2020 after attempting to sell the plots independently.

Kurt purchased a three-bedroom penthouse property in Virginia Beach for $2.8 million in 2009. He sold the property in 2019 at a significant loss with the reported final sales price being only $920,000.

Busch, along with Brad Keselowski and Danica Patrick, is one of the wealthiest NASCAR drivers in the world.

Kurt Busch formerly resided in a $4 million Lake Norman Mansion in North Carolina, which Busch listed for sale in March 2018.

It was one of the biggest houses in North Carolina, and Busch’s desire to sell such a lovely home has never been explained.

Kurt Busch has numerous sponsors, including Rush Truck Centers, Monster, Ford, and Oakley, which account for his wealth and luxurious lifestyle.

Despite his temper and sometimes erratic behavior, he’s an exceptionally talented driver who deserves the wins that he’s achieved.

Here are some of the best highlights of Kurt Busch’s career:

Kurt was experiencing concussion-like symptoms over the summer, and announced he would no longer compete full-time in 2023.

It appears that the Daytona 500 winner’s injury, sustained during a crash on his qualifying laps at Pocono Raceway in July, is more serious than previously thought.

Kurt loves to be seen as an entertainer and his sometimes misguided attempts have resulted in crashes and lost championships.

He’s been lucky to have teams and management who have accepted or overlooked his erratic behavior.

Here are our favorite quotes from Kurt Busch:

Analysing Kurt’s career and his behavior can lead one to learn some important lessons about life and racing.

Now that you know all about Kurt Busch’s net worth, here are some of the best success lessons to learn from Kurt Busch:

Throughout his career, Kurt has had to fight off the self-destructive demons that threatened his career.

However, no matter how bad things got, he was determined to keep racing and make the best of a bad situation.

2. Look After Those Who’ve Supported You

At times, it would have been easy for his teams to cut him loose after one or other of his outbursts.

But, he was blessed to have racing bosses who were prepared to work around his issues, and for that, he is eternally grateful.

3. Take Responsibility For Your Actions

Kurt was always honest about his role in various altercations and, although he pointed fingers at other drivers, never downplayed his own part in events.

After he was found guilty of assaulting other drivers, he owned up to his actions and participated in the necessary counseling to help him cope with his emotions.

He even went so far as to appoint a sports psychologist to help him deal with the issues he was facing.

Kurt had many ups and downs throughout his career, but without a doubt, showed that he’s one of the best. He is still racing in 2022, but on a part-time basis only, as he is concerned about his health and decided to take it a little easier on the track in future.

He also appeared on many TV shows, such as the Dominic Nati Show, NASCAR, on FOX, Fast and Loud, and Home and Home and Family.

Through his enormous racing endorsements and decision to get into real estate investment, he’s achieved huge wealth and is one of NASCAR’s richest drivers ever.

What do you think about Kurt Busch’s net worth? Leave a comment below.