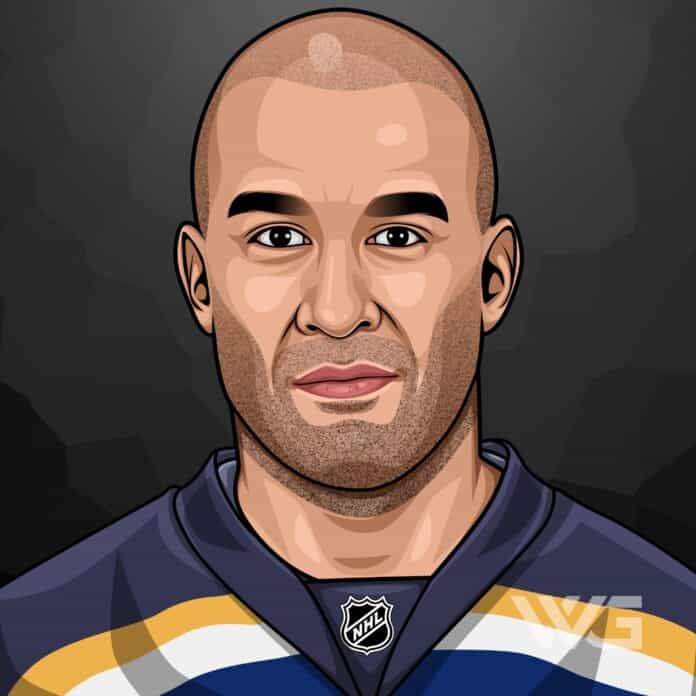 What is Scott Gomez’s net worth?

Scott Gomez is a retired ice hockey player who is now the assistant coach of the New York Islanders.

He was the first Alaskan to play in the National Hockey League (NHL) as well as the first Hispanic star to perform in the NHL.

Due to his speed and skill, he secured a record, seven-year contract worth $51.5 million with the New York Rangers.

He was raised in a quiet neighborhood in mid-town Anchorage and discovered his love for hockey at the age of 4 after his father, Carlos, took him to a hockey game at the University of Alaska.

With his newfound love for the sport, Scott started learning how to skate at the Tikishla Park rink.

Due to being a Mexican American on the ice, a rarity at the time, Scott received racial abuse aimed at his culture, within the sport.

He never let this stop him and was eventually invited to the New Jersey Devil’s locker room where he secured a spot with them at the 1988 NHL drafts.

Scott became the first Alaskan to play in the NHL during the 1999 season with the New Jersey Devils. He joined greats like Martin Brodeur, Jason Arnott, and Ilya Kovalchuk who all played for the  Devils at one time or other.

His reputation and stature in the sport rose, and he was awarded the Calder Trophy and ended up playing in an NHL All-Star Game.

With a total of 63 points in his senior season, Scott made his way with the New Jersey Devils to the Stanley Cup Finals.

Unfortunately, he saw a drop in his numbers during the 2001 season and suffered a setback when a serious injury prevented him from playing against the Carolina Hurricanes.

He made his return to the top during the 2002 season, but only really started to see a serious rise in his stats in 2003.

During the 2004 season NHL lockout, Scott decided to return to his hometown, Anchorage, and play with the Alaska Aces of the ECHL.

He became the face of the franchise and his contribution to the team earned him the Most Valuable Player honor that season.

With his rising numbers, the New York Rangers, home of Alexei Kovalev,  offered him a seven-year contract worth $51.5 million, which he accepted.

He helped lead his new team to the Victoria Cup after defeating Metallurg Magnitogorsk in 2008.

During the 2010 season, Scott changed his number from 91 to 11, as he used to wear the number when he was a child.

He announced his retirement from playing hockey in 2016 and the following year was offered an assistant coaching position with the New York Islanders, where José Théodore, Alexei Yashin, and Doug Weight played.

After he retired from the NHL in 2016, Scott joined the New York Islanders as an assistant coach for a couple of years.

He then took a break from coaching to assess his options in 2019 and decided to join a local company that would allow him to remain engaged with the sport.

The former center with the Devils continues to provide assists – he’s just doing it differently at the moment.

Gomez is working with ELEV802 in Vermont, a firm that constructs small ice surface rinks for local youngsters on which to learn ice hockey.

After earning a substantial amount during his 16 seasons in the NHL, Scott decided that the position of assistant coach would suit his temperament and skills.

Here’s a breakdown of Scott Gomez’s annual net worth:

The average NHL coach makes between $2.5 and $3 million annually, with a range of roughly $1 million to $5 million depending on their experience and team’s results.

A coach’s compensation is guaranteed, and even if they are dismissed, they will still receive their full contract amount no matter where they go.

Scott, though, as an assistant coach, earned substantially less than the coach, but it’s still not an amount to sneeze at, given his knowledge of the game.

Scott prefers to keep his personal life private as well as his love life and there is very little information about him in the tabloid press.

From what we know, he is currently single and lives in his hometown, Anchorage, Alaska, from where he controls his philanthropic contributions.

Scott is the founder of the Scott Gomez Foundation, which provides grants to deserving young people who would not otherwise have the opportunity to experience all that ice hockey has to offer.

Hockey players, their families, and the business community all help to raise money through various events throughout the year.

Here are some of the finest moments from Scott Gomez’s career:

The Foundation holds events such as wine tastings, tamale sales, and other fundraisers throughout the year.

Scotty Gomez attends the signature fundraising events, which include a golf tournament – with a dinner and silent auction, the Guns and Hoses charity hockey game and the Pond Hockey Tournament.

How Does Scott Gomez Spend His Money?

Rather than a mansion, Scott stays in an unassuming three-bedroom bungalow in Anchorage, Alaska that is little different from most others in the area.

The Scott Gomez Foundation takes pride in helping young people to develop their skills in hockey and Scot helps wherever he can to raise much-needed funds for the children.

You won’t find Scotty Gomez driving around in one of the most expensive cars in the world, but rather an old 1990s Nissan his sister is said to have used in college.

The car he won at his own charity golf day, an Acura MDX, is reportedly being returned to the charity to auction off to raise funds, which is what we would expect from someone as unassuming as Scott.

In total, Scot Gomez earned almost $65 million over the 16 seasons he played hockey professionally in the NHL.

Looking at his career statistics and especially his 2 Stanley Cup appearances, it isn’t hard to fathom that the money was well-spent by the teams he represented.

Here are some of the best highlights of Scott Gomez’s career:

Scott played in 16 NHL seasons and won the Stanley Cup, but it has always been his character that has proven the most valuable asset to any team.

Similar to how St. Louis Blues hired Steve Ott as an assistant coach on May 25, Gomez was acquired by the Islanders mostly because of his personal qualities and in-depth understanding of the sport.

Islanders head coach Doug Weight has a huge amount of respect for Gomez and said that his offensive instincts and expertise on the power play were what his team needed.

Here are our favorite quotes from Scott Gomez:

Apart from Scott’s technical ability on the ice, it was his ability to control the game with his skating and smarts, that was a key element in his success as a player.

Now that you know all about Scott Gomez’s net worth, here are some of the best success lessons to learn from Scott Gomez:

Scott Gomez believes that when you fall off a horse, the best way to face your fears is to get back on again and ride.

Rather than worrying about the negative outcomes of returning to something, rather jump straight back into it and think positively.

Sometimes you can’t meet people’s expectations, but as long as you are doing your best, that’s all that you can possibly do.

There were huge expectations on Scott’s shoulders but all that mattered to him was that he was doing his best and improving each season.

3. Be Appreciative Of What You Have

Gomez feels you must appreciate where you are in your life and if great opportunities come your way, enjoy every inch of it.

Scott was always vocal about his appreciation for his opportunities within the NHL and was able to stay humble throughout his rise to stardom.

Scott is acknowledged as one of Alaska’s greatest and most decorated hockey players of all time. He made his fans and his country proud and Alaska is happy to claim him as one of their own.

Gomez retired with a record 181 goals and a total of 575 assists in 2016 and is currently enjoying a humble life in his hometown, living a comfortable, simple existence.

What do you think about Scott Gomez’s net worth? Leave a comment below.

Formula One champion Nico Rosberg started his racing career at a young age and has since earned millions as an extremely talented driver.