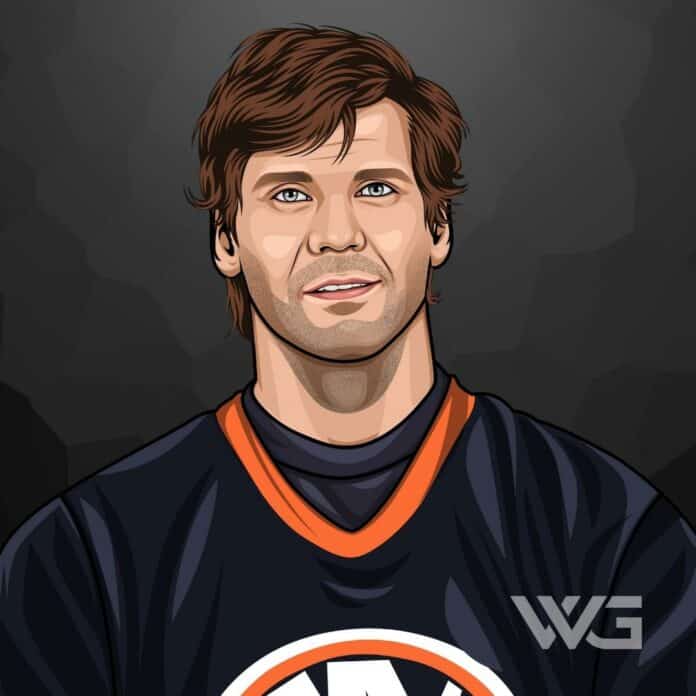 What is Alexei Yashin’s net worth?

Alexei Yashin has scored many goals and produced tons of assists throughout his career, but due to contract disputes, he’s made NHL headlines for all the wrong reasons.

After retiring, he became the general manager of the Russian National Women’s Team. Most of his wealth comes from playing hockey and product endorsements, with a healthy boost from his investment portfolio.

As of November 2022, Alexei Yashin’s net worth is estimated to be $42 Million.

Alexei Valeryevich Yashin was born on November 5, 1973, in Sverdlovsk, Russia.

There is not much known about Alexei’s childhood, but his passion for hockey started from a young age, which is not a surprise, as hockey is a very popular sport in Russia.

By the time he turned 19, Alexei was recognized by the National Hockey League as a formidable player and he was considered for the national team.

This brought him to the attention of the international selectors, who offered him a contract to play for the Senators.

Alexei debuted in 1992 when he was drafted #2 by the Ottawa Senators. Despite this spectacular opportunity, Alexei decided to stay in Russia for the 1992 to 1993 season so he could play for the Dynamo Moscow team.

However, the temptation to play for a Canadian team was overwhelming and he arrived in Ottawa to play the 1993 to 1994 season in the NHL.

Alexei was not the only Russian drafted and arrived with his fellow countryman, Alexandre Daigle. After a victorious 1998-1999 season, the Senators rewarded Alexei by appointing him as team captain. This marked the best season of his career, but his luck ran out during the 1999 season with the Senators getting destroyed by the Buffalo Sabres.

Shortly after that, contract disputes hit the headlines and Alexei was embroiled in controversy for which he is now well-known.

At the time, Alexandre Daigle was given one of the largest rookie contracts in all of hockey history. This may have prompted Alexei’s unhappiness and his demands for more money.

Alexei tried to lessen the backlash from the fans by promising to donate $1 million to the National Arts Centre.

The Senators refused his transfer request and finally suspended him for the 1999 to 2000 season. He returned from suspension in the 2000 to 2001 season but was met with a barrage of jeers and boos from the Senator’s fans. Shortly after, he was transferred to the New York Islanders for an expensive 10-year contract worth almost $87.5 million.

Alexei did very well in the beginning, but soon his performance declined, and the New York Islanders decided to buy out the rest of his contract.

He then returned to Russia to become the general manager of the Russian National Woman’s team in 2012.

Throughout his career, Yashin was always prepared to give his all to the game and his team.

Despite what his detractors may have said, his commitment to the team was always without question.

Since he stopped playing and focussed on coaching, Alexei’s earnings have reduced considerably from before.

However, he’s known to have a good eye for business and his coaching earnings have been supplemented by a healthy return on his investments.

Alexie’s earnings were substantial throughout his career as he was not shy to ask for more money when he thought he deserved it.

This resulted in him earning a fortune in fees and endorsements which he prudently invested.

Here’s a breakdown of Alexei Yashin’s annual net worth:

Yashin is fabulously wealthy, due in part, to his prodigious hockey talent, but also his sharp business brain.

He knew that his playing career would be rather short and that he should maximize his earnings before he retired.

Alexei was always cagey about his personal life and kept out of the limelight. He started dating a former model named Carol Alt and the two have continued their relationship for over two decades.

Despite their long relationship, Alexei and Carol have not married and do not have any children.

They live happily in Russia and the USA, traveling between Moscow and New York regularly for business and pleasure.

Alexei’s hockey skills are impressive and he has scored many goals throughout his career.

What is impressive is the number of assists he’s made, confirming that he is not a selfish player who hogs the puck. He was prepared to pass it off to a player who had a better chance of scoring.

Here are some of the more memorable moments from Alexei Yashin’s career:

While he may no longer grace the ice with his presence, he’s coaching his teams to achieve success.

He joins the likes of Wayne Gretzky, Chris Pronger, and Chris Drury as one of the richest hockey players in the world today.

How Does Alexei Yashin Spend His Money?

Like all very wealthy individuals, Alexei has invested large amounts in real estate.

He purchased a property located in New York for $4 million in 2001. In 2022, he listed the property for sale but removed it due to there not being enough interested buyers.

He loves fast cars and has some of the most expensive cars in the world in his garage.

Alexei Yashin was a colorful player who never failed to live up to his reputation.

His talent was recognized early on and he flourished initially in the NHL before his contractual issues caused a slump in his performance.

Here are some of the best highlights of Alexei Yashin’s career:

While we may not hear as much about him as we once did, Alexei is making waves by coaching national teams.

We’re sure that he will once again be in the headlines when his teams produce memorable results in the future.

Alexei has always been passionate about his sport and he put all his effort into becoming a world-class sportsman.

Here are our favorite quotes from Alexei Yashin:

Alexei Yashin enjoyed a huge amount of success as well as having to deal with his fair share of disappointments and failures during his career.

However, he’s always managed to make the best of a bad situation and come out on top in the end.

Now that you know all about Alexei Yashin’s net worth, here are some of the best success lessons to learn from Alexei Yashin:

Alexei knew his worth and fought through most of his career for it, resulting in him receiving one of the highest transfer contracts in hockey history.

2. Don’t Let Haters Bring You Down

He received a lot of negative comments from the public, but it never stopped him from fighting for what he believed in.

Despite the constant arguments between the Senators management and Alexei, he never held a grudge and wanted to return to the team after many years of disagreements.

Alexei is a highly skilled hockey player, who earned a lot less than he felt he deserved. Unfortunately, his contractual arguments eventually affected his game and he ended up being sidelined for a season.

But despite the media and public’s views, Alexei excelled in his career and created an impressive lifestyle playing hockey. Instead of giving up on his dreams, he continues to help others pursue theirs by coaching them.

He may have retired, but he’ll be remembered throughout hockey history for his contributions to the sport.

As of November 2022, Alexei Yashin’s net worth is estimated to be $42 Million.

What do you think about Alexei Yashin’s net worth? Leave a comment below.