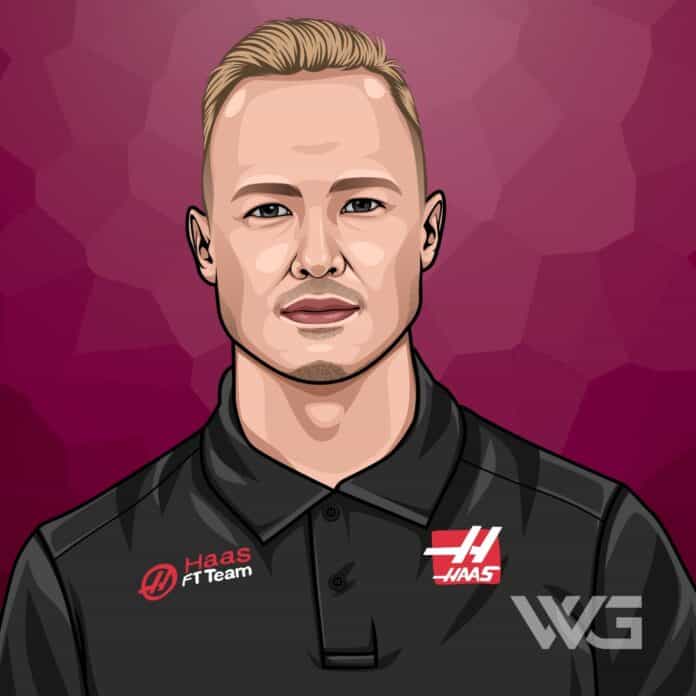 What is Nikita Mazepin’s net worth?

Nikita Dmitryevich Mazepin is a Russian professional racing driver who has quickly become one of the most skilled drivers in Formula One.

Although he has been racing since 2014, he entered Formula One in 2019 and quickly established himself as a strong competitor.

However, since 2022, he has been suspended due to the ongoing Russian invasion of Ukraine and his father’s ties to the Russian government.

Nikita Dmitryevich Mazepin was born March 2, 1999, in Moscow, Russia, to Dmitry Mazepin, a Russian-Belarusian oligarch who is the primary chairman and shareholder of the chemical company Uralchem.

In 2011, Nikita won the Russian Karting championship and officially started his international karting career, quickly climbing the ranks to become one of the best drivers.

During his final year of karting, in 2014, Nikita came in second in the Karting World Championship, which prompted him to make his car racing debut at the MRF Challenge Formula 2000 race later that year.

In 2016, Mazepin competed in the FIA Formula 3 European Championship, finishing in 20th place.

Nikita continued to race in Formula 3 for another year before moving to GP3 in 2018, where he competed in the ART Grand Prix and won four races, the most of any driver that year.

During his career in Formula One, Mazepin partnered with Mick Schumacher and drove under a neutral flag for the Russian Automobile Federation.

Mazepin competed in the 2021 Formula One World Championship, and while he was set to compete in 2022, his team contract was terminated following the Russian invasion of Ukraine.

Following his departure from Formula One, Nikita made his Rally Raid debut and started We Compete As One, a foundation for supporting athletes who have been excluded for political reasons.

Nikita Mazepin has earned a lot of money during his racing career, but he is also heir to his father’s fortune as well.

While we don’t know everything Mazepin has earned during his career behind the wheel, we do know a bit about his general income overall.

Nikita has earned more than enough money to become one of the richest racing drivers in the world, though his future wealth is uncertain given the state of the ongoing Russian-Ukrainian conflict.

Nikita Mazepin is a talented driver, but his career hasn’t been without controversy.

In 2020, the racing driver faced backlash based on a story posted to his official Instagram account, which appeared to show him inappropriately touching a woman.

This led to the creation of the hashtag #WeSayNoToMazepin, and while he apologized, his apology post was deleted nine days after its posting date.

In 2022, Nikita was included in EU sanctions based on his father’s connections to the Russian government, which has set back his Formula One career and caused many of his assets to be seized pending a resolution in Ukraine.

Having been racing since 2014, Nikita Mazepin has competed in many races over the course of his career.

While all of his accomplishments have been significant, some stand out more than others.

Here are some of Nikita Mazepin’s most important career achievements:

Although he hasn’t won as many races as Kimi Raikkonen, if he is able to keep competing, it is very likely he could become one of the most accomplished racers in Formula One.

How Does Nikita Mazepin Spend His Money?

Nikita Mazepin is no stranger to a lavish lifestyle, thanks to his father, Russian oligarch Dmitry Mazepin, and his billion-dollar fortune.

However, while Nikita has spent his money on yachts, homes, and some of the most expensive private jets in the world, all of this changed dramatically in 2022.

Due to his father’s ties, both Nikita and his father were sanctioned by the EU, causing him to lose the means to live his playboy lifestyle.

His $100 million home in the Mediterranean, with 25 rooms, luscious gardens, and a large swimming pool, was reportedly seized by authorities, though he is said to own other homes in Monaco, Paris, and Moscow.

Mazepin is also known to own some of the most expensive cars in the world, including a McLaren 720, Lamborghini Aventador, Audi RS Q8, and Bugatti Veyron.

Nikita Mazepin has experienced a lot of success during his career, which has helped make him remarkably wealthy.

However, some moments stand out over the rest for their impact on his fame and fortune.

Here are some of the best highlights of Nikita Mazepin’s career:

Like Fernando Alonso, Nikita Mazepin has reached many impressive milestones during his career, and he is just getting started.

Nikita Mazepin may be relatively new to the Formula One Circuit, but he has already made waves as a talented driver.

Looking to be the best he can be, Nikita is known to never back down from a challenge and give 100% in every race he competes in.

Here are our favorite quotes from Nikita Mazepin:

There is a lot we can learn from Nakita Mazepin and his short but impressive racing career.

Now that you know all about Nikita Mazepin’s net worth, we can take a closer look at what he can teach us about reaching our own goals.

Here are some of the best success lessons to learn from Nikita Mazepin:

If you want to be successful, you will have to become competitive in order to stand out.

This doesn’t mean you shouldn’t work with others, but that you should always push yourself to be the best.

2. Pave Your Own Way

If you can’t find a way to achieve your goals, make a way for yourself.

Although this isn’t always easy, it is sometimes necessary if other ways of reaching your goals aren’t available.

3. Don’t Let Setbacks Hold You Back

Everyone falls behind at some point, but you’ll never make progress if you focus too much on your setbacks.

Remember that your setbacks and mistakes are just temporary and that once you learn from them, you should move on and leave them in the past.

Nikita Mazepin has only been active in Formula One for a single season, but he has already earned incredible wealth.

While he has since been put on hiatus due to the ongoing Russian activities in Ukraine, we will likely see him return to the track in the future.

If you want to stay informed about changes impacting Mazepin’s fortune and career, check back often for updates!

What do you think about Nikita Mazepin’s net worth? Leave a comment below.