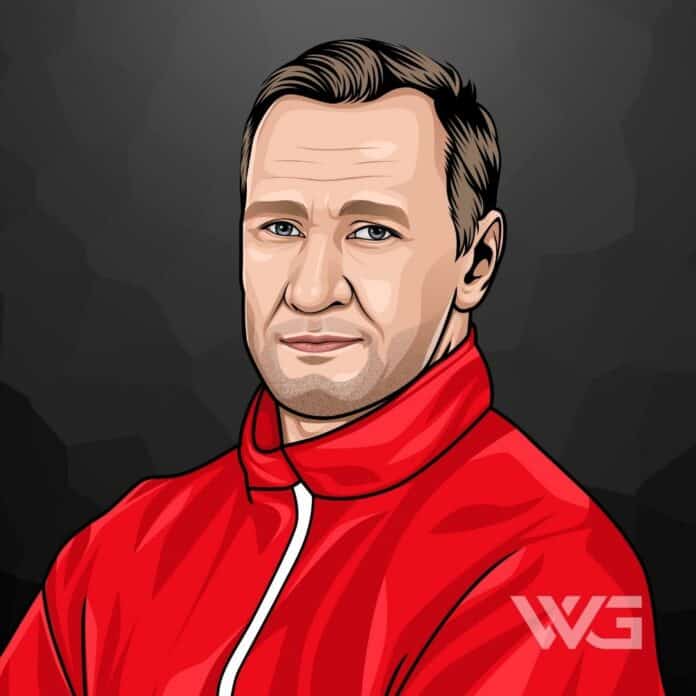 What is Alexei Kovalev’s net worth?

Alexei Kovalev is best known for his incredible wrist shot and stickhandling during his 19-season career.

He was described as one of the most improved players in the NHL and, as a rookie, he managed to win a Stanley Cup.

It was obvious, early on, that Alexei was an exceptionally talented hockey player, but he was also one of the most complicated members of the squad.

As of November 2022, Alexei Kovalev’s net worth is estimated to be $43 Million.

Not much is known about Alexei’s childhood, but we do know that he left home at 14 to pursue his hockey dreams.

His coach at the time believed that he was extremely talented and used to make him play for the 12-year-old’s team when he was only 9.

He grew up with his brother, Maximilian Kovalev, and a stepsister, Adel Bukary.

After leaving home, he played for the HC Dynamo Moscow team for three years. In 1991, he was drafted by the New York Rangers, which marked the beginning of his successful professional hockey career.

His drafting into the New York Rangers was a big accomplishment considering he was the first Russian to be drafted in the first round. He showed his obvious talents in the sport at the beginning of his career by winning the Stanley Cup within only two years of being drafted.

Alexei decided to return to Russia during the 1994 to 1995 season to play for his hometown. After multiple successful seasons, Alexei was eventually traded to the Pittsburgh Penguins during the 1998 to 1999 season. Through the course of two seasons, he recorded two of the best seasons in the NHL.

After the completion of his four-year contract, he signed with the Ottawa Senators in 2009. The following year marked his 1000th point in his career when he scored his sixth goal of the season.

Alexei decided to be traded back to the Pittsburgh Penguins in 2011 which ended prematurely, and he returned to Russia once again to play for Atlant Moscow Oblast.

During the 2012 to 2013 season, he signed a one-year contract with the Florida Panthers. After an unfortunate loss to the Pittsburgh Penguins, Alexei announced his retirement in 2014.

He made a comeback in 2016, playing for EHC Visp, but was ejected from the game and shortly after announced that he would become the general manager of the EHC Visp club.

Alexei has had an enormous impact on the ice hockey scene, having played for the top clubs and paving the way for top Russian players in the professional league.

He has earned his place in ice hockey history with his achievements and also earned himself a huge amount of money along the way.

Despite Alexei being somewhat erratic in his play, he always managed to pull off a big result.

This earned him a reputation for not being sufficiently committed to his team, but he always earned a top income for his efforts.

From early on in his career, Kovalev was determined to make the most of his opportunities. He was careful with his money, making sure that it was properly invested for maximum return.

This resulted in him ending his career with a fortune that made him one of the richest hockey players in the world alongside the likes of Wayne Gretzky, Chris Pronger, Chris Drury, and Alexei Yashin.

Here’s a breakdown of Alexei Kovalev’s annual net worth:

Alexei continues to earn an enormous salary for his hockey coaching abilities as he manages to draw out the best in his players year after year.

Alexei Kovalev married Eugenia Kovalev in 2001 and the couple has two children.

One of his passions is aviation and during his spare time, he likes to fly planes and is a licensed pilot.

Alexei Kovalev was identified early on in life as a talented player, which meant that he is no stranger to the winner’s podium.

He lived up to his coach and fan’s expectations, getting selected for the national team and winning gold at the Olympics.

Here are some of the more memorable moments from Alexei Kovalev’s career:

Although he is no longer playing, Alexei’s influence on the game is felt through the team he currently coaches. They get to benefit from his vast knowledge and legendary experience as an Olympic medal winner and professional hockey player.

How Does Alexei Kovalev Spend His Money?

Being a pilot is not enough for Alexei, as he is now the proud owner of his own plane which he has been flying since the mid-nineties.

Alexei is acutely aware of the health challenges facing the youth today and started his foundation, the Alex Kovalev foundation, as a way to help those in need. In the past, this foundation has raised over $250,000 for a charity that helps assist children with cardiac issues.

He loves speed and besides his plane, he has some of the most expensive cars in the world parked in his garage.

Right from the start, Alexei Kovalev made an impact on the hockey world with his speed and agility.

As a newcomer in his first draft, he was able to chalk up a Stanley Cup win, which is an impressive achievement.

Here are some of the best highlights of Alexei Kovalev’s career:

Now that Alexei is no longer playing hockey professionally, he has more time to apply his mind to the art and science of ice hockey.

EHV Visp will certainly benefit from his insights and knowledge of the sport and translate it into victories for the club.

Alexei Kovalev understands the importance of intensity in every game as well as the ability to bounce back from adversity.

He continues to focus on winning as it has served him well in his career, resulting in an impressive record or wins and medals.

Here are our favorite quotes from Alexei Kovalev:

Alexei Kovalev has always been very competitive, which accounts for his numerous titles and awards.

However, his burning determination to improve his skills is what made him stand out above his peers.

There were times when Alexei had to face some talented teams, but he never let this get in the way of his performance.

Without confidence, most of his teams would not perform to their best abilities. Alexei believes that having confidence on the ice brings out the best in everyone.

One of Alexei’s best strategies while playing was patiently observing his opponent and using whatever weaknesses he may have discovered against them.

Alexei might as well have been born on the ice as he is still as agile now as he was during his rookie years.

He has gained broad experience, playing for various teams, learning something new along the way, and creating an inspirational path for Russian hockey players.

Even after retirement, he still follows his dream of playing hockey and doing his best to help others as well. He will always be remembered as a pioneer of the new era in professional hockey.

As of November 2022, Alexei Kovalev’s net worth is estimated to be $43 Million.

What do you think about Alexei Kovalev’s net worth? Leave a comment below.