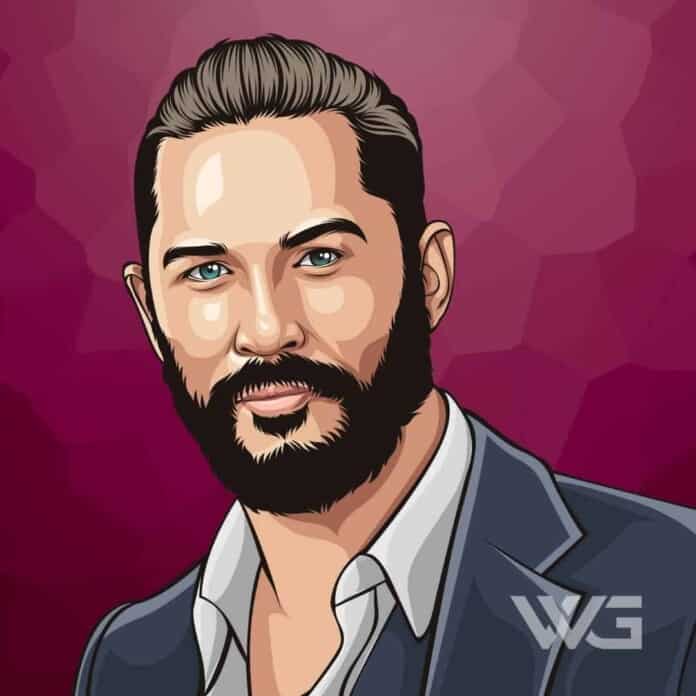 What is Tom Hardy’s net worth?

Tom Hardy is a famous English actor, who is well known for his appearances in films such as ‘Mad Max: Fury Road,’ ‘The Revenant,’ and ‘Inception.’

He has been in numerous television shows and movies and has been known to be an extremely committed actor as he has changed physical appearance multiple times to really embrace the roles he has been given.

As of December 2022, Tom Hardy’s net worth is approximately $55 Million.

Edward Thomas Hardy is an only child and was born in London on September 15, 1977.

His father, Edward Hardy, is a writer and novelist and his mother Anne Hardy is an artist.

At an early teenage stage in life, Tom began to abuse drugs and alcohol.

Tom’s television debut was in 2001 on Steven Spielberg‘s series called ‘Band of Brothers.’ Soon after that, he released his debut film Black Hawk down which evidently received harsh criticism.

BBC cast him as Robert Dudley in ‘The Virgin Queen’ and the following year he was on ‘Stuart: A Life Backwards.’

In 2008 he appeared in ‘RocknRolla,’ and a year later he gained 19 kg to play a character in the film ‘Bronson.’

He was in both ‘The Long Red Road’ and ‘Inception’ in 2010, and the following year he was the lead character in ‘Tinker Tailor Soldier Spy’ and ‘Warrior.’

Here are some of the best highlights of Tom Hardy’s career:

“We’re all flawed human beings, and we all have a cauldron of psychosis which we have to unravel as we grow older and find the way we fit in to live our lives as best as possible.” – Tom Hardy

“It doesn’t matter who you are. What matters is your plan.” – Tom Hardy

“There’s always a certain pride in getting the job done properly.“ – Tom Hardy

“Love is doing something you don’t want to do for someone you don’t particularly like at that moment.” – Tom Hardy

View our larger collection of the best Tom Hardy quotes!

3 Rules for Success from Tom Hardy

Now that you know all about Tom Hardy’s net worth and how he achieved success; let’s take a look at some of the lessons we can learn from his success:

We are all human, and we all have flaws, make mistakes, and ultimately better ourselves as we grow. Everyone has the same ability and potential to live their lives to the fullest and to figure themselves out as they become older.

2. “It doesn’t matter who you are. What matters is your plan.”

It doesn’t matter who you are or where you come from because all that matters is your destination and what the future holds for you. What truly matters about an individual is what they set out to do and how they accomplish that.

3. If you do something, then do it right

If you are going to do something, then you need to really commit to it at complete it to the absolute best of your abilities. Make everything you do actually count and don’t leave anything only done halfway.

How much is Tom Hardy worth?

Tom Hardy’s net worth is estimated to be $55 Million.

How old is Tom Hardy?

How tall is Tom Hardy?

Tom Hardy is a famous English actor that has recently put himself back on the map as a well-known actor and is now back on the rise.

What do you think about Tom Hardy’s net worth? Leave a comment below.