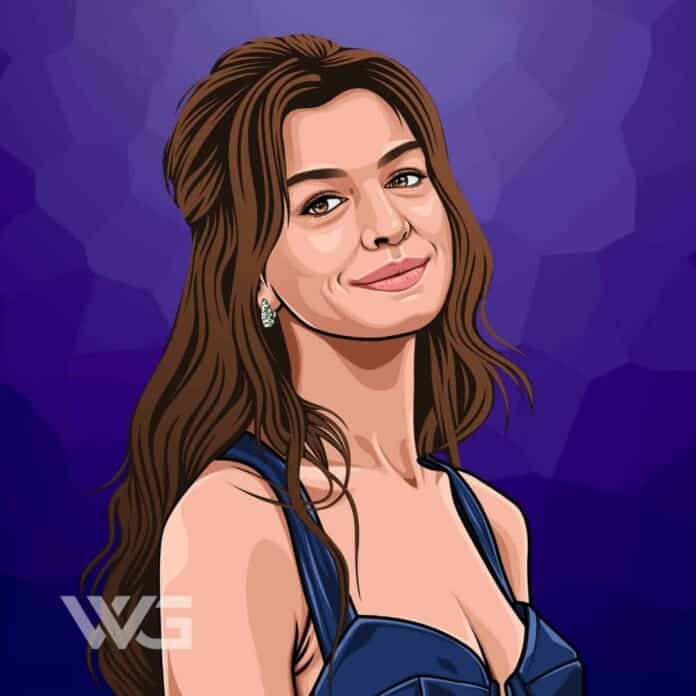 What is Anne Hathaway’s net worth?

Anne Hathaway is an American actress and singer who has appeared in dozens of movies, making her one of the highest-paid actresses in the world.

Her roles range from family-oriented movies such as The Princess Diaries and Alice in Wonderland to critically acclaimed performances in Les Miserables and Interstellar.

As of February 2023, Anne Hathaway’s net worth is estimated to be $80 Million.

Anne Jacqueline Hathaway was born on November 12th, 1982, in Brooklyn, New York City, and was raised by her attorney father and former actress mother.

After moving to New Jersey, she decided she wanted to follow in her mother’s footsteps and have a career in the entertainment industry.

After breaking into acting by landing the lead role in The Princess Diaries, Anne Hathaway moved away from children’s films to star in Ang Lee’s Brokeback Mountain.

Subsequently, she has worked with some of the richest directors in the world, perhaps most notably with Christopher Nolan.

Their first collaboration came with The Dark Knight Rises, in which she starred alongside Christian Bale and Michael Caine, playing the role of Catwoman.

She reunited with Nolan for Interstellar, again working with one of the richest actors in the world, Matthew McConaughey, and it was a huge success at the box office.

Other notable roles include Les Miserables with Hugh Jackman, which earned Hathaway multiple awards nominations and wins, securing her place in Hollywood history’s hall of fame.

As Anne Hathaway’s career has progressed, the actor has been able to command increasingly more significant fees for her movie roles.

For her performance in Princess Diaries, Hathaway was paid a salary of $400,000, doubling this amount for her appearance in Brokeback Mountain.

In 2008 and 2009, she was paid $5 million for both Get Smart and Bride Wars, a significant increase on her previous salaries.

With a combined box office gross of over $6.8 billion, her movies have proved her to be one of the most bankable stars working today.

Over the course of her career, Anne Hathaway has been able to increase her acting fees as she has taken on more prominent roles in large-budget movies.

The early success of The Princess Diaries meant she was able to command much higher fees than other actors with comparable experience.

Through working with Christopher Nolan on some of the biggest blockbusters in recent years, Anne Hathaway has consistently increased her net worth to its current $80 million.

Anne Hathaway was romantically involved with Raffaello Follieri between 2004 and 2008 before an IRS investigation led to the real estate developer facing criminal charges.

In 2012, Hathaway married Adam Shulman, an actor, and businessman with whom she has two sons.

With dozens of movie credits in her filmography, Anne Hathaway has earned critical acclaim for many of her roles.

This has led to nominations for many awards including at the Academy Awards, Golden Globes, and British Academy Film Awards.

Here are some highlights from Anne Hathaway’s career:

How Does Anne Hathaway Spend Her Money?

With her impressive net worth and ability to command high fees for her performances, Anne Hathaway has plenty of disposable income to spare.

Having worked on The Devil Wears Prada, which focuses on one of the richest designers in the world, Hathaway has also earned a reputation for her impeccable dress sense.

She has also invested money in a real estate portfolio that includes a luxury apartment in New York City and a mansion in Connecticut she sold for $2.7 million.

With a long and impressive career in the entertainment industry, Anne Hathaway has plenty of accomplishments to her credit.

Here are some of the best highlights of Anne Hathaway’s career:

Anne Hathaway has been interviewed dozens of times over the course of her career, offering unique insights into the entertainment industry and how to live a great life.

Here are our favorite quotes from Anne Hathaway:

Now that you know all about Anne Hathaway’s net worth let’s see what lessons we can learn from her fascinating life and career.

Here are some of the best success lessons to learn from Anne Hathaway:

1. Always Treat People As A Gift, Not A Burden

In various interviews, Anne Hathaway has spoken about her choice to treat all the people in her life as a gift, believing that gratitude can get you a long way in life.

2. Whenever Possible, Choose The Path In Life That Is The Most Versatile

While Hathaway enjoyed huge success early in her career working on family-friendly movies, she didn’t want to become stereotyped.

After making the transition to more serious roles she found critical and commercial acclaim, building her reputation as a serious actor.

3. Take A Little Time To Make Sure You Look Your Best

Hathaway is well known for her striking good looks and classy dress sense, and is a firm believer in being creative when choosing your style.

That wraps up this guide to Anne Hathaway’s net worth and the hit movies and franchises that helped her amass her fortune.

With her versatile range of acting, allowing her to go from children’s movies to serious dramas, Hathaway has proven herself to be an actor well worth watching.

Since her career is far from over, her net worth will change in the future, so if you want the latest figures, be sure to check back on this article at a later date.

As of February 2023, Anne Hathaway’s net worth is estimated to be $80 Million.

What do you think about Anne Hathaway’s net worth? Leave a comment below.