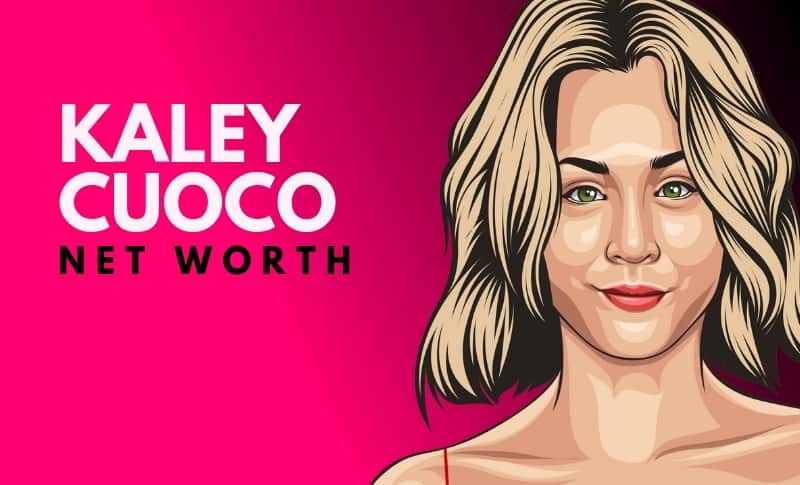 What is Kaley Cuoco’s net worth?

Kaley Christine Cuoco is an American actress from Camarillo. Cuoco initially gained recognition when she landed her breakthrough role as Bridget Hennessy on the sitcom ‘8 Simple Rules’.

Kaley Christine Cuoco was born in Camarillo, California on the 30th of November, 1985. Cuoco is the elder daughter of Layne Ann, a homemaker, and Gary Carmine Cuoco, a realtor. Her father is of Italian descent while her mother is of English and German ancestry.

Cuoco’s sister, Briana, competed on the fifth season of The Voice. As a kid, Cuoco was a regionally ranked amateur tennis player. She stopped playing later, to pursue her career as an actress.

Kaley Cuoco began her career at the age of 6. She started modeling for commercials for brands like Barbie Dolls. In 1992, when she was 17, she appeared in the TV movie ‘Quicksand: No Escape’.

In 1994, Cuoco appeared on the television shows ‘My So-Called Life’ and ‘Northern Exposure’. She also made her feature movie debut the following year by portraying Karin Carter in the science fiction action film ‘Virtuosity’.

Two years later, Cuoco portrayed Little Ellen Morgan, the younger version of the TV star Ellen DeGeneres, in the series ‘Ellen’. The same year, she also starred in the romantic comedy film ‘Picture Perfect’ and she had a role in the Disney fantasy film ‘Toothless’.

Cuoco was the main cast in the ABC sitcom ‘8 Simple Rules’. She returned to the big screen in 2004 where she starred in ‘Debating Robert Lee’. The following year, Cuoco also was the co-lead in the telefilm ‘Crimes of Fashion’ alongside Megan Fox.

In 2004, Cuoco continued to impress her audience with her talented and incredible performance. She appeared on television in the series ‘The Help’, ‘Complete Savages’, ‘Punk’d and ‘10.5’. Cuoco performed as Billie Jenkins in the eighth and final season of the cult hit show.

None of these films or gigs gave her the recognition that her role of ‘Penny’ on The Big Bang Theory did, though. Cuoco has played the role since the show aired in 2007, alongside actors such as Jim Parsons, Johnny Galecki, and Simon Helberg.

The show has become one of the most successful shows on TV and has aired for 13 seasons.

Here are some of the best highlights of Kaley Cuoco’s career: 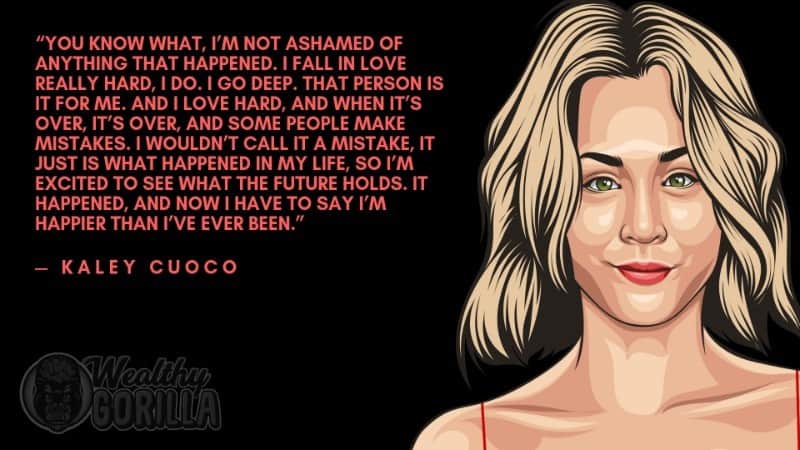 “You know what, I’m not ashamed of anything that happened. I fall in love really hard, I do. I go deep. That person is it for me. And I love hard, and when it’s over, it’s over, and some people make mistakes. I wouldn’t call it a mistake, it just is what happened in my life, so I’m excited to see what the future holds. It happened, and now I have to say I’m happier than I’ve ever been.” – Kaley Cuoco 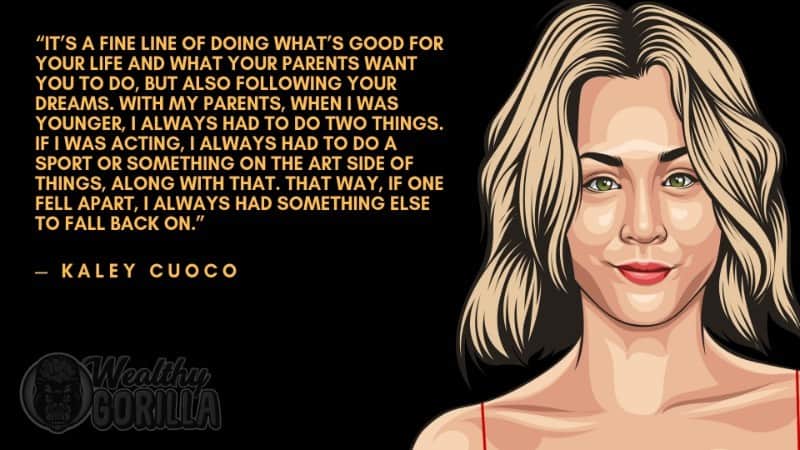 “It’s a fine line of doing what’s good for your life and what your parents want you to do, but also following your dreams. With my parents, when I was younger, I always had to do two things. If I was acting, I always had to do a sport or something on the art side of things, along with that. That way, if one fell apart, I always had something else to fall back on.” – Kaley Cuoco 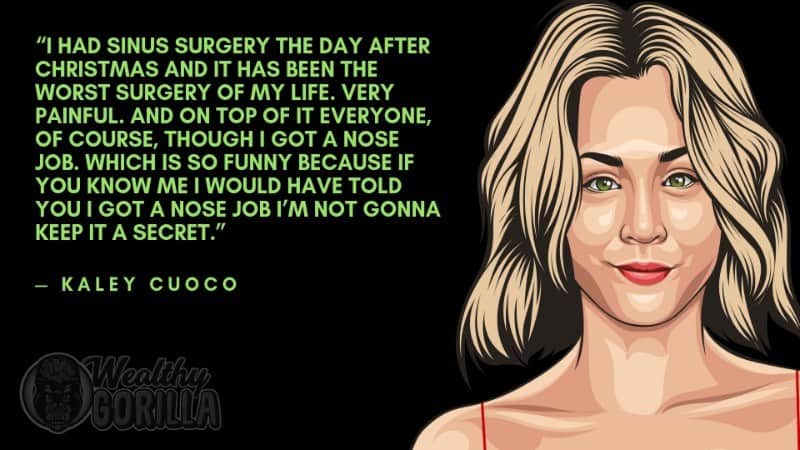 “I had sinus surgery the day after Christmas and it has been the worst surgery of my life. Very painful. And on top of it everyone, of course, though I got a nose job. Which is so funny because if you know me I would have told you I got a nose job I’m not gonna keep it a secret.” – Kaley Cuoco 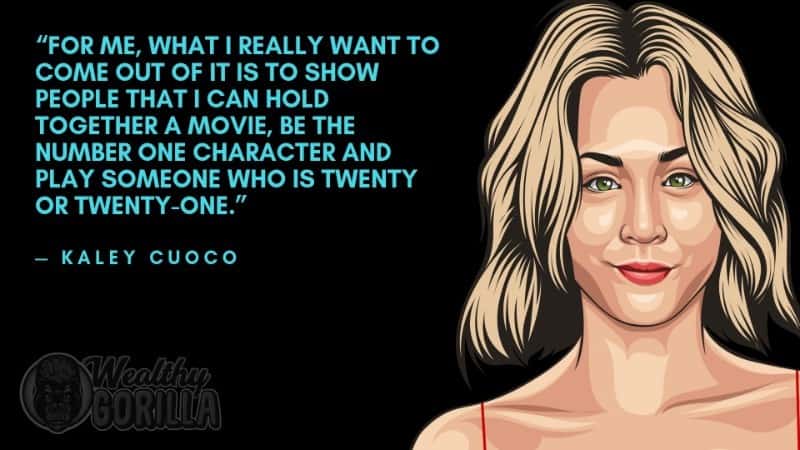 “For me, what I really want to come out of it is to show people that I can hold together a movie, be the number one character and play someone who is twenty or twenty-one.” – Kaley Cuoco 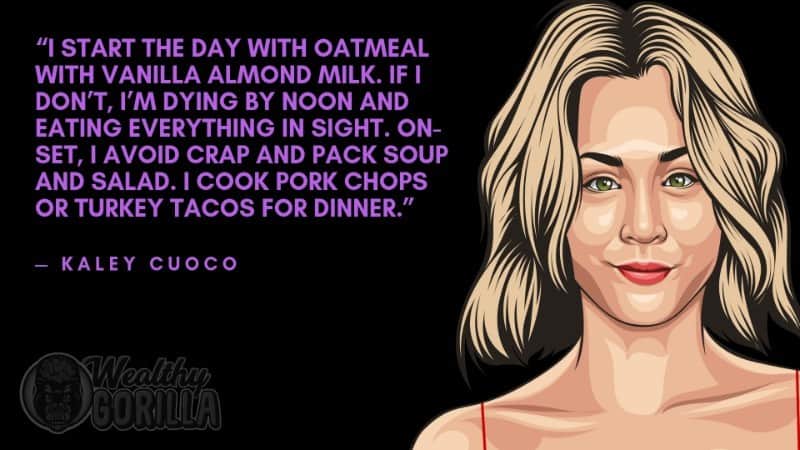 “I start the day with oatmeal with vanilla almond milk. If I don’t, I’m dying by noon and eating everything in sight. On-set, I avoid crap and pack soup and salad. I cook pork chops or turkey tacos for dinner.” – Kaley Cuoco

View our larger collection of the best Kaley Cuoco quotes!

Kaley Cuoco is a talented actress and has collaborated with some of the best actors such as Russell Brand, Kevin Hart, and James Franco. She also had the big honor to get her own star at the Hollywood Walk of Fame in 2014.

What do you think about Kaley Cuoco’s net worth? Leave a comment below.