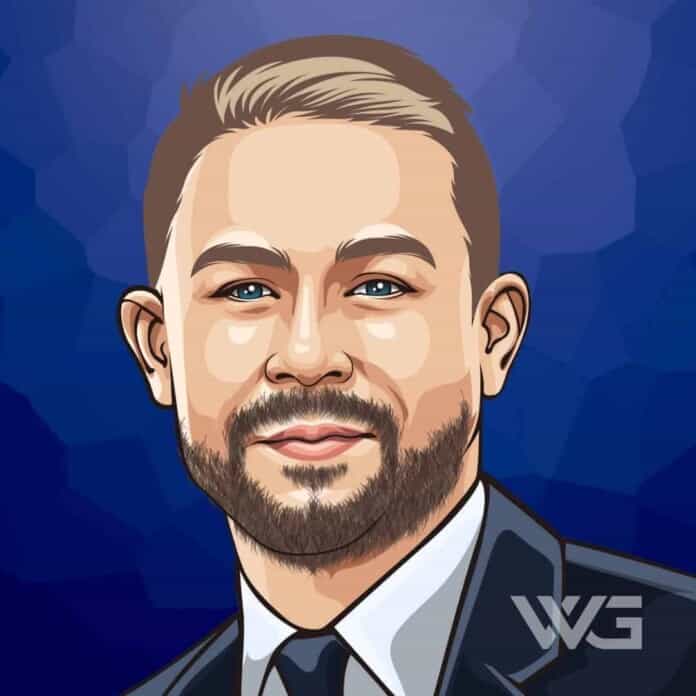 What is Charlie Hunnam’s net worth?

Charlie Hunnam is an English actor from Newcastle, England.

Hunnam is best known for his roles as Jackson “Jax” Teller in the FX drama series ‘Sons of Anarchy’ for which he was twice nominated for the Critics’ Choice Television Award for Best Actor.  He is also known for starring in the role of Guy Ritchie’s ‘King Arthur: Legend of the Sword’.

As of December 2022, Charlie Hunnam’s net worth is roughly $20 Million.

Charles Matthew Hunnam was born on the 10th of April, 1980, in Newcastle, England. Hunnam is the son to William ‘Billy’ Hunnam and Jane Bell.

His parents got separated when he was two years old. Growing up in Newcastle upon Tyne, he received his formal education from ‘Heaton Manor School.’

In 2002, he made his American film debut with the psychological thriller ‘Abandon’ in which he was cast to play the role of ‘Embry Larkin,’ the missing boyfriend of a college student, played by Katie Holmes.

The following year, he was cast along with Nicole Kidman, Jude Law, and Renée Zellweger in the movie ‘Cold Mountain.’ In the movie, he played the pivotal character of a ‘Civil War’ marauder who joins the home guard and kills deserters for cash.

In 2011, he was cast in various films, including the philosophical drama/thriller ‘The Ledge.’ The following year, he was seen in the crime drama film ‘Deadfall.’

Here are some of the best highlights of Charlie Hunnam’s career:

“It always seemed to me like it was a significant thing to do with one’s life to be an actor ’cause I love movies and I felt like, not to be grandiose about it, but there is something important about the film with the function it provides to general society.” – Charlie Hunnam

“The landscape of cinema is not original. Not to say there aren’t great movies being made, but it’s much easier for studios to make movies that have built-in audiences. So it’s all remakes, adaptations, a lot of remakes of adaptations.” – Charlie Hunnam

“Right before I got Sons of Anarchy, I actually quit acting for 18 months and didn’t read a single script, and I wrote a film. I felt like I needed to do something that I had control over, as an artist, and also just do something where I felt like I had some control over my life, as just a human, out in the world.” – Charlie Hunnam

“I was playing pretty boys and these angelic roles like Nicholas Nickleby and all that stuff. And I was like, ‘What am I doing? This isn’t who I am, as a man or an artist.’ I had to overcome people’s belief that I was too pretty to be a badass.” – Charlie Hunnam

“I got expelled from high school and then did my exams at home. I decided, through that experience, that I was going to expedite my plan and didn’t go to university. Instead, I went to a community college and studied the theory and history of film with the idea that I wanted to write and direct.” – Charlie Hunnam

3 Lessons from Charlie Hunnam and Sons of Anarchy

Now that you know all about Charlie Hunnam’s net worth, and how he achieved success; let’s take a look at some of the best lessons we can learn from him:

1. Chances Are Meant To Be Taken

If you can recall, Jax was doing everything it took to get his club out of the spotlight and off the cops’ radar so that he could go legit and make things work while still keeping the integrity of SAMCRO and all it stood for. The chances he took were great and didn’t always pan out but they were worth the effort at least.

Some people might think this means Clay, but in truth, Clay was always more of a usurper than anything and pretended at the strength that he had.

A man that would gladly kill off his friend and leader and start making back-alley deals to keep his position isn’t much of a man or a leader. Unfortunately, Jax had to learn that a good leader will make sacrifices at times, even if it’s a sacrifice he can’t bear to make.

3. Recognize Those That Are Worth Your Time

Maybe you’ll remember, as Allison Keene of Collider did, about Rat Boy and how Jax recognized his worth during one episode when he was finally patched in. A real leader recognizes who’s worth their time and who isn’t.

How much is Charlie Hunnam worth?

Charlie Hunnam’s net worth is estimated to be $20 Million.

How old is Charlie Hunnam?

How tall is Charlie Hunnam?

Charlie Hunnam is a reputed and established English actor who shot to fame portraying the role of ‘Nathan Maloney’ in the television drama series, ‘Queer as Folk.’

Over the years, he has starred in films and television series of varied genres. One of his most remarkable performances came in the ‘FX’ series ‘Sons of Anarchy’ where he played ‘Jackson Teller.’

What do you think about Charlie Hunnam’s net worth? Leave a comment below.

Discover how the American film producer and director Frank Marshall earned his huge net worth and redefined the summer blockbuster.