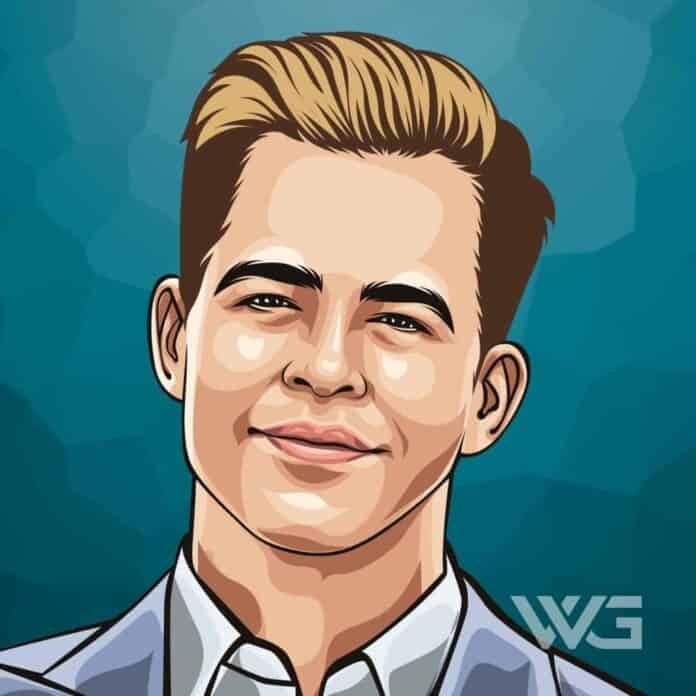 What is Chris Pine’s net worth?

Chris Pine is an American actor from Los Angeles.

Pine is best known for starring in movies such as ‘The Princess Diaries 2: Royal Engagement’, ‘Star Trek’ reboot film series, ‘Unstoppable’, ‘Cinderella’s Prince in Into the Woods’, ‘The Finest Hours’, ‘Wonder Woman’, and ‘Outlaw King’.

Christopher Whitelaw Pine was born on the 26th of August, 1980, in Los Angeles. Pine is the son of Robert Pine, who was a prominent actor, and Gwynne Gilford, who was also an actress but later chose psychotherapy as a career.

He has an older sister named Katie. Ever since he was a kid, the vibe around his house was always cinematic and Chris grew up in a household where script readings and talks about films were frequent.

Once out of the theatre circuit, Chris started auditioning for TV roles and ended up getting minor roles in the TV series’ such as ‘ER’, ‘The Guardian’ and ‘CSI: Miami’ and started doing short films right around that time in 2003.

In 2007 he was seen in a play titled ‘Fat Pig’ where he played the role of the best friend of the lead character as an alpha man and received praises from all over for his performance.

Pine was seen providing his vocals for the second season of ‘SuperMansion’ in 2017 and also ended up narrating National Geographic Channel’s ‘Breakthrough’.

In mid-2017, came the most defining role of his entire career in his most successful film to date, ‘Wonder Woman’, where he portrayed the role of Steve Trevor, a World War British spy and Gal Gadot’s love interest.

Here are some of the best highlights of Chris Pine’s career:

“We tell each other stories so we can understand the world better and there’s a catharsis and we understand the models of what a hero could be and what the hero’s journey as a human being is all about. But unfortunately, I think sometimes those stories too can be very prohibitive and confining.” – Chris Pine

“I am critical of myself like everyone else. You go to a movie theater and you are forty feet high. I had bad skin as a teenager and I am a shy person, but I think I am in the perfect business to fight my insecurities. You have to learn to love yourself and say ‘I am pretty cool’ instead of being so critical. You can easily fall into the trap of doing that.” – Chris Pine

“I think it’s not fair to the uniqueness and wonderfulness of the individuals, that we can complement one another greatly, but we are not the source of each other’s happiness, especially if you don’t know who the hell you’re talking to.” – Chris Pine

“I think it’s a very healthy thing to learn from what’s happened in the past. But only if you look at what happened and think, ‘How could I have dealt with that differently?’ Then let it go.” – Chris Pine

“For me growing up, Christmas time was always the most fantastic, exciting time of year, and you’d stay up until three in the morning. You’d hear the parents wrapping in the other room but you knew that also, maybe, they were in collusion with Santa Claus.” – Chris Pine

Now that you know all about Chris Pine’s net worth, and how he achieved success; let’s take a look at some of the lessons we can learn from him:

If you have kindness in your heart, you offer acts of kindness to touch the hearts of others wherever you go—whether they are random or planned. Kindness becomes a way of life.

You attract who you are being. When you work at being the type of person that you want to attract, you attract those kinds of people into your life.

You have come a long way and have won many battles. Whenever you’re faced with a difficult or challenging situation, you’ll overcome it. Yes, you can.

How much is Chris Pine worth?

Chris Pine’s net worth is estimated to be $35 Million.

How old is Chris Pine?

How tall is Chris Pine?

Chris Pine is an American actor known for his roles in movies like ‘Star Trek’ and ‘Wonder Woman’. However, still, critics were praising Pine for his acting abilities and named him as a new ‘A list star in making’.

What do you think about Chris Pine’s net worth? Leave a comment below.