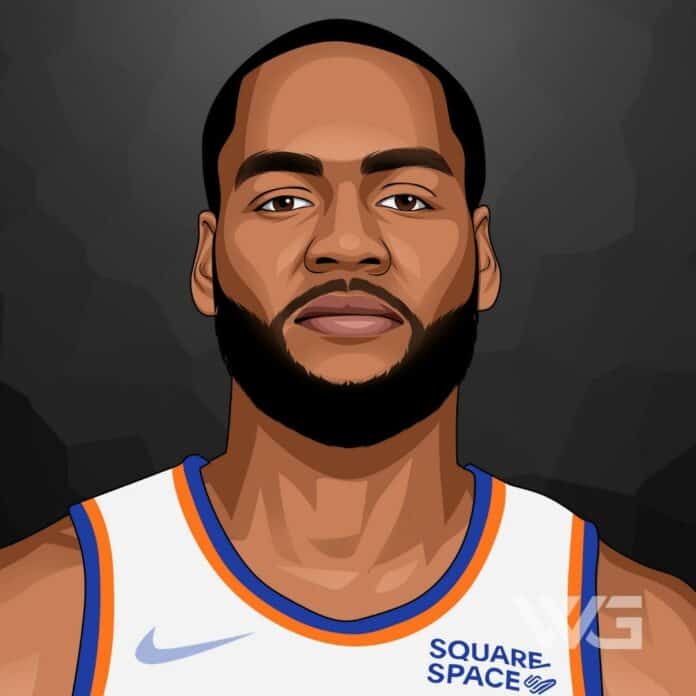 What is Alec Burks’ net worth?

Alec Burks is an American professional basketball player who started his career in 2011 after being drafted by the Utah Jazz.

Since starting his professional career, Burks has played for many of the richest NBA teams, which has enabled him to build his net worth.

Although he has been playing for over a decade now, he has no plans to leave the court anytime soon, and we expect to see much more from him in future seasons.

Alec Burks was born July 20, 1991, in Grandview, Missouri, to Dina and Steve Burks, and he attended Grandview High School growing up, where he was named the Gatorade Player of the Year in 2009.

Thanks to his successful high school basketball career, he was considered a three-star recruit, and he committed to attending the University of Colorado in 2009.

As a freshman for the Colorado Buffaloes, he was named the Big 12 Conference Freshman of the Year in 2010, and during his sophomore year, he was selected for the All-Big 12 first team.

In 2011, he decided to forgo his last two years of college eligibility to enter the NBA draft.

Alec Burks was selected by the Utah Jazz as their 12th overall pick in the 2011 NBA draft, and he remained with them until 2018.

During his time with the Jazz, he scored a career-high 34 points before experiencing a number of injuries that interrupted his seasons.

Adding insult to injury, in November 2016, he was ruled out indefinitely due to a left ankle injury which left him unable to play for the season.

In 2018, he was traded to the Cleveland Cavaliers, and he spent one season with them before being acquired by the Sacramento Kings in 2019.

Later the same year, he signed with the Golden State Warriors, who then traded him and Glenn Robinson III to the Philadelphia 76ers in February 2020.

Burks signed with the New York Knicks in November 2020 and played with them until he was traded alongside Nerlens Noel to the Detroit Pistons, who he remains with today.

While he isn’t as wealthy as Mike Conley or Nicolas Batum, Alec Burks has done very well for himself financially during his career.

Although his average annual salary has fluctuated over time, he has consistently earned millions, which has helped his net worth increase.

Despite his earning fluctuations, Burks has still managed to consistently earn a decent amount for his skills.

He may never be one of the richest NBA players in the world, but he is poised to make a solid amount of money as he continues his career.

Alec Burks married his wife, Elyse, in August 2019, and together they have three children; Harper, August, and Ashtyn.

Off the court, Burks can be found on his official Instagram account, though he very rarely updates it and has never posted any photos of his personal life.

He also has an official Twitter account but hasn’t posted anything since 2017, and we’re unsure if he will ever return to the platform.

Your best shot at catching a glimpse of Burks home life is on Elyse’s official Instagram, where she posts photos of the family and keeps everyone updated on their milestones.

Like Hakeem Olajuwon and Dwight Howard, Alec Burks has achieved a lot during his career that has helped him stand out.

While he has earned many honors, we’ve chosen to highlight his most prestigious honors from his high school, college, and NBA career.

Here are some of Alec Burks’ best career awards and achievements:

Although he hasn’t earned any distinctions lately, these honors and awards have been Burks most significant.

We do expect to see him earn more as he continues his career and builds his renown in the NBA.

How Does Alec Burks Spend His Money?

Despite his long career in the NBA, Alec Burks doesn’t flaunt his fortune, and little is known about how he spends his cash.

However, we know that, thanks to his prior team affiliations, he has lived in some of the most expensive cities in the US, including New York, Philadelphia, and San Francisco.

We can also assume he has spent money on some of the most expensive sneakers ever made since basketball players tend to go through shoes quickly due to their frequent use on the court.

If any information about his spending habits becomes available in the future, we will be sure to let you know. So, make sure to check back often so you won’t miss any updates!

Alec Burks has accomplished a lot during his career that has helped him stand out and become a fan favorite.

However, we’ve chosen to highlight some of his most formative milestones, particularly the ones that have helped him build his fame and fortune.

Here are some of the best highlights of Alec Burks’ career:

While his milestones may not seem as impressive as those earned by Lonzo Ball, they do demonstrate how far he has come since starting his career.

As he continues playing in the NBA, we may very well see him reach even more milestones as his skills continue to improve.

There is a lot that we can learn from Alec Burks and his long and impressive career as a point guard in the NBA.

Now that you know all about Alec Burks’ net worth, we can take a look at what he can teach us about reaching our own goals.

Here are some of the best success lessons to learn from Alec Burks:

1. Don’t Be Afraid Of Change

While there can be many things holding you back from achieving success, being afraid of change is one of the biggest.

It can be easy to hold yourself back for fear of the unknown, but this will only slow down your progress and prevent you from being able to get ahead.

2. Learn From Your Failures

Alec Burks is no stranger to losing games, but he has never let it hold him back and has continued building himself up for over a decade.

This is something that everyone looking to become successful should take to heart, because failures are unavoidable, and it is crucial that you’re able to learn from them and move on.

Even if your main goals seem extremely far away, you should never give up on them outright, because then you’ll lose any chance of ever reaching them.

You can learn how to pursue your dreams whilst working 9-5 so that you can still make progress towards them even if you can’t dedicate all of your time to them.

Alec Burks has enjoyed a long and successful career in the NBA, and he has no plans to leave the court anytime soon.

Despite having played for over a decade, we expect to see much more of him in the future as he continues to improve his skills and increase his fame.

Make sure to check back often so you won’t miss any important updates on Burks’ ongoing career and increasing wealth.

What do you think about Alec Burks’ net worth? Leave a comment below.