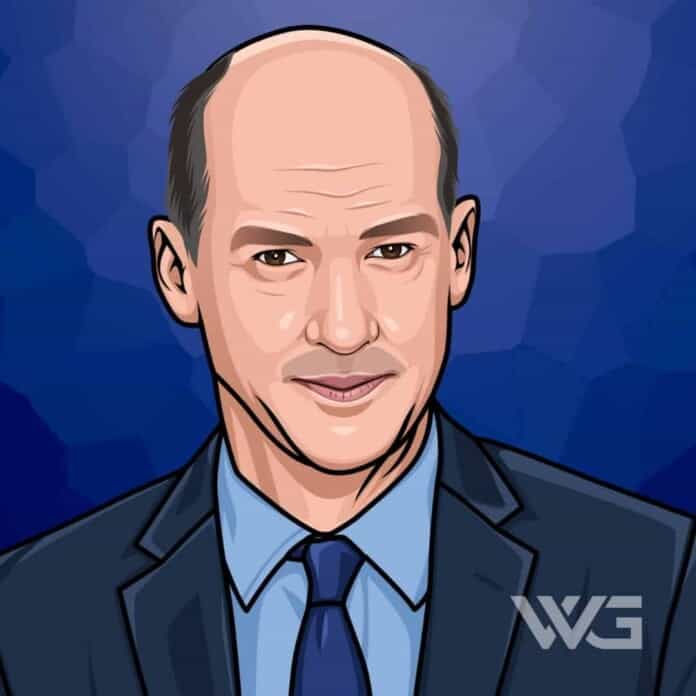 What is Anthony Edwards’ net worth?

Anthony Edwards is an American actor and director.

Edwards is most widely known for his portrayal of Dr. Mark Greene on the first eight seasons of ‘ER’. He received a Golden Globe and six Screen Actors Guild Awards for his performance.

He has appeared in various movies and television shows such as ‘Top Gun’, ‘Zodiac’, ‘Miracle Mile’, ‘Revenge of the Nerds’, ‘Planes’, ‘Northern Exposure’ and ‘Designated Survivor’.

As of November 2022, Anthony Edwards’ net worth is estimated to be roughly $40 Million.

Anthony Charles Edwards was born on the 19th of July, 1962, in Santa Barbara, California. Edwards was raised in an Irish family with roots in art, architecture, and design. He received a scholarship to attend the Roal Academy of Dramatic Arts. He also studied theatre at the University of Southern California.

Edwards is the son of Erika Kem Edwards Plack and Peter Edwards. He is of Irish descent and he has two older sisters and two older brothers. He was encouraged by his parents to attend college.

He rose to fame when he booked the role of “Goose” in ‘Top Gun’ alongside Tom Cruise. The movie proved to be a huge success and it generated over $356 million at the box office despite receiving mixed reviews. After ‘Top Gun’ he found continued success in films including ‘Hawks’ and ‘Downtown.’

In 1994, Edwards starred in ‘ER’. He played the role of Dr. Mark Greene. ‘ER’ is known for its high ratings and incredible long run. He won a number of honors and accolades for his performance in the series.

Edwards followed up this with a role in ‘Zodiac’ in 2007. In 2010, he joined the biggest box office bomb in British history ‘The Motherhood’.

In 2017, Edwards booked a recurring role as a judge in ‘Law & Order True Crime’. The following year, he joined the cast of ‘Designated Survivor’ which aired on Netflix. Outside acting, he has a number of directing credits. He had the opportunity to direct during his involvement in ‘ER’.

As of November 2022, Anthony Edwards’ net worth is estimated to be $40 Million.

How Does Anthony Edwards Spend His Money?

Anthony Edwards spends his money on real estate and he loves to work with children in Africa. He has supported many different charity organizations.

Before his divorce, from his ex-wife, his family rented a home in New York City for $40,000 per month before finally purchasing their own duplex penthouse in Carnegie Hill for $8.52 million in 2015.

Edwards is best known for his roles in ‘ER’ and ‘Top Gun’ and he devotes much of his life to working with children in Africa. He has supported charity organizations including Bicycle For A Day and Shoe4Africa.

Here are some of the best highlights of Anthony Edwards’ career:

“People relate to things that feel real to them. All the good, happy, over-sexed, and moneyed endings on TV are not the way most of us feel in our lives. The success of ‘E.R.,’ I think, is not relying on overly sentimental stories that are solved where people’s lives wrap up nicely with happy endings.” – Anthony Edwards

“I did tons of theater in school, and then when I was 16 and got my driver’s license, I started driving to Los Angeles, along with my friend Eric Stoltz, who was a year ahead of me and was doing the same thing. So we had the same manager, and we started auditioning for things and doing commercials when we were 16.” – Anthony Edwards

“There are definitely roles within this industry that are industry-related, but to be a good actor, you really have to want to act first. At the same time, my goal was never to go to Hollywood to make movies. I think if you come here with that attitude, then you’ve missed a few steps.” – Anthony Edwards

“Spent a lot of time on ‘ER’ for that eight years. I also started working when I was 16, so by the time I left ‘ER,’ I was 40 years old, I had this incredible experience, my wife had this great company, we had four kids, it was like, ‘Let’s go to New York and live for a while and make that the priority.” – Anthony Edwards

“Why is there such vanity about hair? I make a point to bathe. I worry about boogers in my nose, and I ask the makeup artist to cover up my pimples, but beyond that, I try not to be too vain.” – Anthony Edwards

Now that you know all about Anthony Edwards’ net worth and how he achieved success; let’s take a look at some of the lessons we can learn from him:

There’s really no point in having children if you’re not going to be home enough to father them.

To think one film makes a career is ridiculous. It’s important to keep perspective and do things other than for money.

There are definitely roles within this industry that are industry-related, but to be a good actor, you really have to want to act first. At the same time, my goal was never to go to Hollywood to make movies.

How much is Anthony Edwards worth?

Anthony Edwards’ net worth is estimated to be $40 Million.

How old is Anthony Edwards?

How tall is Anthony Edwards?

Anthony Edwards is an American actor and director who some may know as “Goose” from ‘Top Gun’. He has also established himself as a well-known TV actor with a notable role in ‘ER’.

Edwards has won a Golden Globe, six Screen Actors Guild Awards and has also been nominated for four Primetime Emmy Awards. He signed a three-year $35 million contract to continue on with “ER”.

As of November 2022, Anthony Edwards’ net worth is estimated to be roughly $40 Million.

What do you think about Anthony Edwards’ net worth? Leave a comment below.