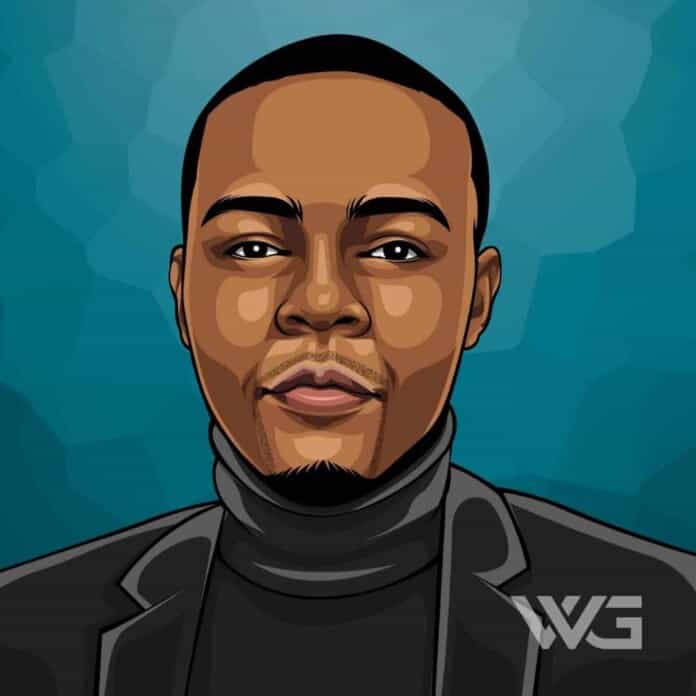 What is Bow Wow’s net worth?

Shad Gregory Moss, better known by his stage name Bow Wow, is an American rapper, actor, and television host from Ohio. As Lil’ Bow Wow, he released his first album, Beware of Dog, in 2000 at age 13, which was followed by Doggy Bag in 2001.

In 2003, Bow Wow released his third album Unleashed, which was the first album released after dropping the “Lil'” from his stage name.

He was raised in Reynoldsburg and his father, Alfonso Preston Moss, abandoned the family and Shad never saw him since his birth.

Moss was raised by his mother, Teresa Rena Caldwell, alongside his stepfather Rodney Caldwell and his step-sisters Erica and Jasarah. His mother was very supportive of his passion for music and she started to take him to talent competitions around his hometown when he was 5 years of age.

Lil Bow Wow dropped his first album ‘Beware of Dog’ in 2000 which became a massive hit with record sales of more than 3 million copies till 2009. The album included hit songs like ‘Bounce With Me’ featuring R&B group Xscape, ‘Ghetto Girls’ and ‘Puppy Love’ with Jagged Edge.

Following the success of his debut album, he released his second album ‘Doggy Bag’ in 2002 which sold more than 1.1 copies in the US. The album included hit songs like ‘Thank You’ and ‘Take Ya Home’ including his ‘Basketball’ song that featured in the soundtrack of his film ‘Like Mike’.

His fourth album ‘Wanted’ was dropped in 2005 and received Platinum certification.

The songs titled ‘Let Me Hold You’ in collaboration with Omarion and ‘Like You’ featuring his then-girlfriend Ciara secured top positions on Billboard Hot Rap Tracks and Billboard 200 proving his potential as a rapper and sold nearly 1 million copies in the US.

He also released a compilation album titled ‘The Very Best of Bow Wow’ in 2010. All of them faired pretty well and made him a popular rap artist.

Here are some of the best highlights of Bow Wow’s career:

“Guys like Todd Bridges never overcame being a child star. You can’t have any big failures. I’ve always felt regular. I played organized ball at the rec league. At 13, they told me I sold 3 million copies. I didn’t know what that meant.” – Bow Wow

“At the end of the day, I want to spend time with my daughter, and this schedule enables me to do that while still having fun hosting ‘106 Park.’ I’m not really eager to get back into music just yet; I’m really eager to get into another movie before I put out an album.” – Bow Wow

“Anyone who knows me knows how much time I spend on computers. I’m a computer addict. Every young person deserves to have a computer in his or her home. It’s also cool that CFY will also make sure that they learn how to use them.”  – Bow Wow

Now that you know all about Bow Wow’s net worth, and how he achieved success; let’s take a look at some of the most humbling lessons we can learn from him:

1. Build the Lifestyle You Want

What do you want to achieve as an independent artist? Ask yourself that question and be really honest with yourself with the answer.

Bow Wow is cool with staying independent because Bow Wow knows he has a loyal fanbase. All he has to do is keep building and cultivating his following so that whenever he goes on tour or sell merchandise, they’ll be there to support him.

3. Believe In Your Music

Just do what you wanna do. If you stick to your guns, stick to what you’re saying, then, in the end, the universe will give it to you, because you believed in yourself. You can pretty much just create your own world.

How much is Bow Wow worth?

Bow Wow’s net worth is estimated to be $1.5 Million.

How old is Bow Wow?

How tall is Bow Wow?

He is famous for his released hip-hop albums and mixtapes which have won many golds and platinum certifications and has ranked on Billboards Top 200 and Top 100 charts.

Bow Wow has achieved a lot of fame and stardom through his acting skills as well.

What do you think about Bow Wow’s net worth? Leave a comment below.