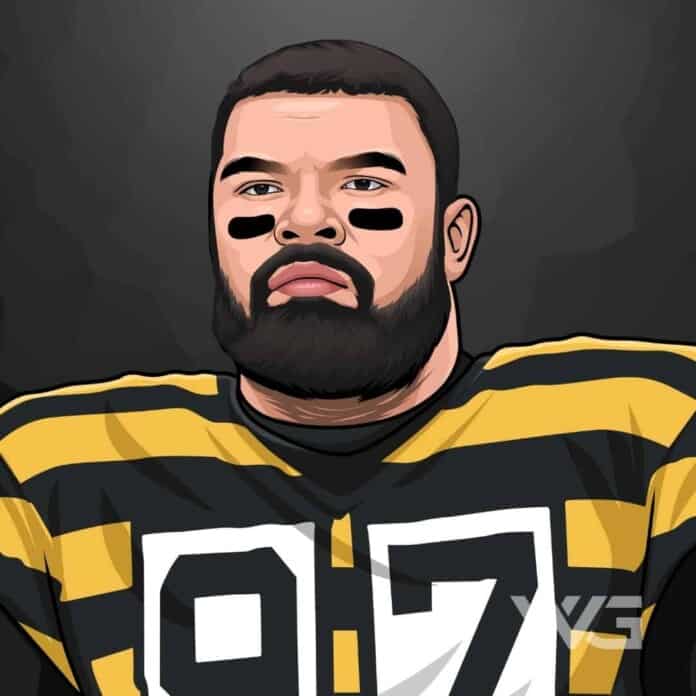 What is Cameron Heyward’s net worth?

He plays as the defensive end for the Pittsburgh Steelers of the NFL. Heyward was drafted by the Steelers in the first round of the 2011 NFL Draft. He played college football at Ohio State.

Heyward was born in Pittsburgh, Pennsylvania. His late father, Craig Heyward, was a former NFL fullback. His father died from cancer, and Cameron was fined by the NFL for uniform violations when he displayed his father’s nickname in a black eye message during the NFL’s 2015 Breast Cancer Awareness campaign.

Cameron Phillips Heyward was born on the 6th of May, 1989, in Pennsylvania.

He was the 2006 Georgia Class 5A Defensive Player of the Year. The team tied for the Georgia Class 5A State Championship that same year. He was considered the 7th best football player in Georgia and the 13th best defensive tackle in the nation by Scout.com.

The Pittsburgh Steelers selected Heyward in the first round (31st overall) of the 2011 NFL Draft. He was the seventh defensive end selected in 2011.

On July 29, the Pittsburgh Steelers signed Heyward to a four-year, $6.70 million contract that included $5.41 million guaranteed and a signing bonus of $3.37 million.

He made his professional regular-season debut in the Pittsburgh Steeler’s season-opener against the Baltimore Ravens and made one solo tackle as the Ravens routed the Steelers 35-7.

Here are some of the best highlights of Cameron Heyward’s career:

“We all want AB here, but to be a part of this team, you can’t do that. You don’t let your brothers down. It hurt more knowing that there were multiple people in that locker room giving everything they’ve got. … I think everybody wants AB on the team, but we’ve got to be on the same page.” – Cameron Heyward

“My dad was always in the community and gave back, helping kids in need, turkey drives. That’s the way my dad and mom both raised us. I always try to make them proud. So I want to be that lasting breath of what he left but create some of my own, as well.” – Cameron Heyward

“It’s a goal of mine to reach. I won’t settle on that. There are other goals I want to hit. That’s one thing on the checklist I could say I hit, but the sky’s the limits.” – Cameron Heyward

Now that you know all about Cameron Heyward’s net worth, and how he achieved success; let’s take a look at some of the strongest lessons we can learn from him:

If you talk about it, it’s a dream. Try to envision it. It’s possible. If you schedule it, it’s real.

Forget your excuses. You either want it bad or don’t want it at all.

The key to success is to start before you are ready.

How much is Cameron Heyward worth?

Cameron Heyward’s net worth is estimated to be $25 Million.

How old is Cameron Heyward?

How tall is Cameron Heyward?

He was drafted 31st overall in 2011 and is considered to be one of the best players in the league. Coming out of Ohio State, Heyward was projected to be selected in the first round by the majority of analysts and scouts.

Sports Illustrated ranked him the 16th best prospect and the fifth-best defensive end before the NFL Combine.

What do you think about Cameron Heyward’s net worth? Leave a comment below.