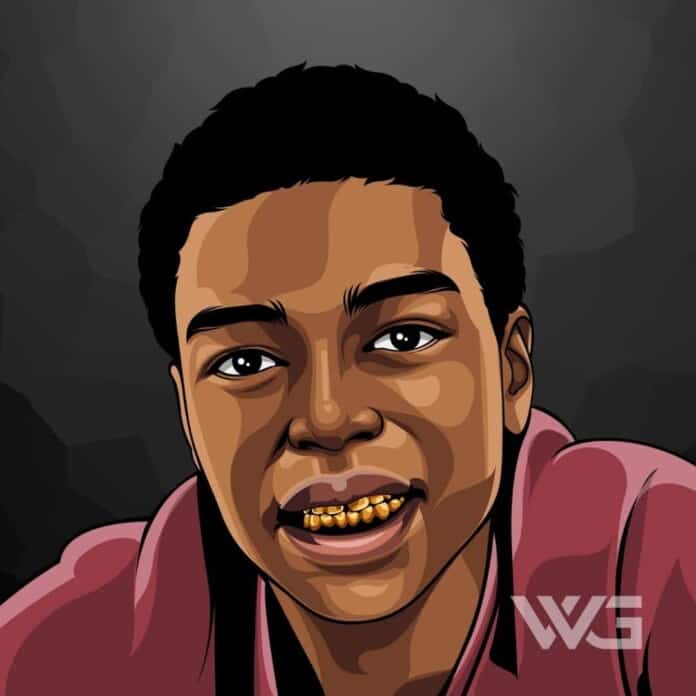 What is Kodak Black’s net worth?

Bill K. Kapri, better known by his stage name Kodak Black, is an American rapper. Black is noted for his singles ‘Zeze’, ‘Roll in Peace’, ‘Tunnel Vision’, and ‘No Flockin’, as well as his numerous legal issues.

Bill K. Kapri “Kodak Black” was born on the 11th of June, 1997, in Pompano Beach, Florida. His father left the family soon after Kodak was born, and he was raised by a single mother.

Kodak and his mother shifted to a nearby housing society in Golden Acres where many immigrants from Haiti also lived.

Kodak began selling drugs and indulging in other petty crimes at an early age. He was not interested in school and had a poor attendance record. He got into several fights in school, which led to his expulsion from the school on many occasions.

Kodak Black began his career when he was 12 years old, and he joined a local small-time rap group named ‘Brutal Youngnz’. He, later on, switched to another group called ‘The Kolyons’.

In 2013, Kodak released his debut mixtape, ‘Project Baby’ which did well at the local nightclubs and brought Kodak significant fame. The following two years, he released two more mixtapes, ‘Heart of the Projects’ and ‘Institution’.

In 2015, famous rapper Drake danced to one of Kodak’s songs, ‘Skrt’, and this was one of Kodak’s major career-defining moments. A number of ‘google’ searches for his song soared and he was exposed to national fame.

Kodak’s fast-growing popularity came through when he released his fourth mixtape, ‘Lil B.I.G. Pac’. The mixtape was released by Atlantic Records and it became his first album to feature on the Billboard music charts.

In 2017, Kodak released a single ‘Tunnel Vision’ which reached the top of many American music charts. The single debuted at the 27th spot and peaked at number six on the ‘Billboard Hot 100’.

In August, he dropped ‘Project Baby’ the sequel to his mixtape ‘Project Baby’. One of the singles from the album, ‘Codeine Dreaming’, became hugely successful and peaked at the 52n spot on the Billboard Hot 100 chart.

On Valentine’s Day 2018, Kodak released another mixtape, ‘Heartbreak Kodak,’ which was yet another success.

Here are some of the best highlights of Kodak Black’s career:

“I’m a product of my environment. I grew up in the projects, I’m a project baby. All the project babies can relate to what I say, ‘cause they’re on the same thing. We’re cut from the same cloth, you feel me? We going through the same struggle and all that shit. So, they gonna feel me. And all the other people, they just like what I’m saying, they just like my drive.” – Kodak Black

“I have a huge drive. I was born with nothing. So I was always brought up like: go get it. No matter what. Even if it’s scoping and poking. Rapping and trapping. You know, I did it. I switched my whole grind up from doing that, from scoping and poking, to just getting in a booth and just doing my thing.” – Kodak Black

“I will just be doing me. I don’t listen to no rappers, but if it’s a good song I’ll listen to it. But, I don’t really look up to nobody.” – Kodak Black

View our larger collection of the best Kodak Black quotes!

Now that you know all about Kodak Black’s net worth, and how he achieved success; Let’s take a look at some of the strongest lessons we can learn from Kodak Black:

1. Go Against All Odds

You gotta go against all odds, you know? Boss your life up.

Change your life today. Don’t gamble on the future, act now, without delay.

How much is Kodak Black worth?

Kodak Black’s net worth is estimated to be $600 Thousand.

How old is Kodak Black?

How tall is Kodak Black?

Kodak Black is a controversial rapper who is best known for his singles ‘Roll in Peace’, ‘Tunnel Vision’, and ‘No Flockin’. Black is really young but is already very successful.

His debut album ‘Painting Pictures’ reached the third spot on the Billboard 200 chart.

As of December 2022, Kodak Black’s net worth is approximately $600 Thousand.

What do you think about Kodak Black’s net worth? Leave a comment below.