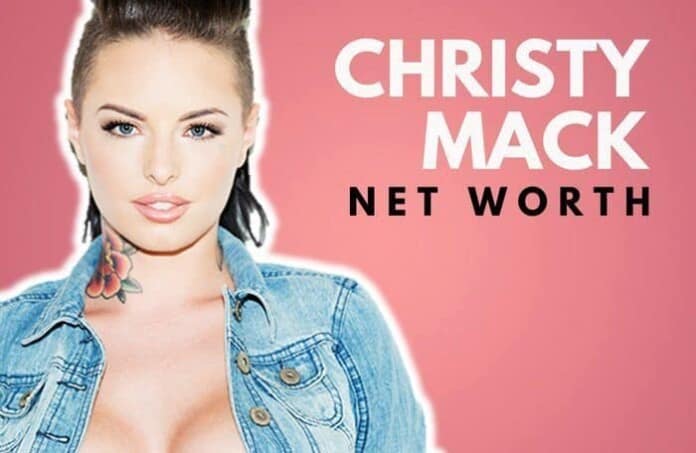 What is Christy Mack’s net worth?

As of December 2022, Christy Mack’s net worth is roughly $500 Thousand dollars, which makes her one of the youngest and highest paid adult actresses.

Christine Mackinday, known as “Christy Mack”, is an American model and adult film actress from South Chicago. Mack started her career as a model in 2011 which gained her attention from producers in the adult film industry.

One year later she began her career as an adult film actress. Mack is 27 years old and has done very well for herself thus far in her career.

Christy Mack was born in South Chicago, Illinois on the 9th of May, 1991. Mack was mostly raised in Edinburgh, Indiana by her parents. Mack has one older brother, and she started her career by dancing in a gorilla suit in front of a Sprint Store.

In 2009 Mack attended Colombus North High School. Christy started modeling at the age of 18 and pursued her career as an adult film actress after that. Mack started to collaborate with some of the best companies in the adult film industry.

In 2012 she started her adult film career in America. Mack starred in a number of films, and she worked with some of the best adult film companies in the industry, including Wicked Pictures.

Mack stated in 2013 that she planned to quit her career as an adult film actress claiming that she didn’t have enough time for her work. During this time she was busy with her online store.

In 2015 writer Jane McManus featured Mack in an article in ESPN, that covered Mack’s early life and her career as an adult actress. At the end of the article, Mack confirmed her retirement from the adult film industry.

The following year Mack was taken to hospital after an attack from her ex-boyfriend War Machine. Mack suffered from 18 broken bones, missing teeth, a broken nose, and a fractured rib. War Machine would later be found guilty and was sentenced to 36 years to life in prison.

Here are some of the best highlights of Christy Mack’s career:

“Found out the fake parts of my teeth glow in the tanning bed. So that’s fun, I guess. I’m glad that doesn’t happen with my boobs …” – Christy Mack

“I’m set for a hustle, He had to be paid an obscene amount of money, cuz he followed me on twitter for months and stalked me pretty much.” – Christy Mack

“I think it can be both ways, honestly. There are some girls that want to be absolutely degraded and they want to be destroyed on film and that’s what they go for. Maybe some light domination but nothing that can be considered degrading. I don’t really see it as empowering or degrading. It can empower women a little bit through exploring sexuality and things like that but I don’t see it as degrading if you don’t want it to be.” – Christy Mack

“Every morning I spend fifteen minutes filling my mind full of God, and so there’s no room left for worry thoughts.” – Christy Mack

“I was in the car with my mom yesterday going to Hobby Lobby and I’m like “sometimes, mom, it’s like I’m a real celebrity!” My mom downplayed it—she’s like, “no, you’re not even close.” She’s hilarious. Then we show up in Hobby Lobby and this woman freaked out because she saw me and she got to meet me, and she’s like “my boyfriend and I are such big fans, and it’s so great to meet you, I need to take like five pictures with you.” It’s cool to be an adult film star and have that kind of recognition.” – Christy Mack

How much is Christy Mack worth?

Christy Mack’s net worth is estimated to be $500 Thousand.

How old is Christy Mack?

How tall is Christy Mack?

Christy Mack is an accomplished actress and has built herself an incredible net worth throughout her career. Mack has collaborated with some of the finest companies and achieved several awards for her performances.

As of December 2022, Christy Mack’s net worth is estimated to be $500 Thousand. If you like this article, don’t forget to check out our article on Johnny Sins net worth.

What do you think about Christy Mack’s net worth? Leave a comment below.