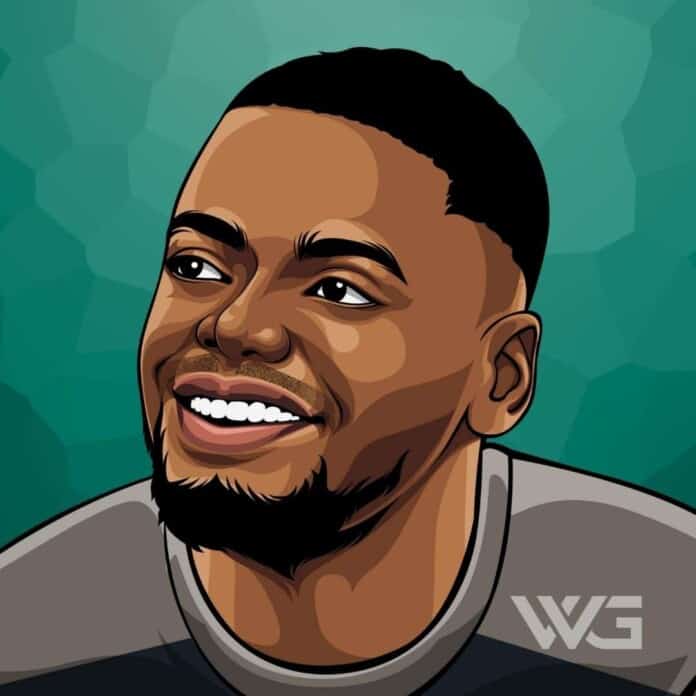 What is Daniel Kaluuya’s net worth?

Daniel Kaluuya is an English actor and writer from London. Kaluuya achieved international recognition and acclaim for his leading role as Chris Washinton in the horror movie ‘Get Out’. He was nominated for the Academy Award, Golden Globe Award, SAG Award, and BAFTA Award for Best Actor.

As of January 2023, Daniel Kaluuya’s net worth is roughly $15 Million.

Daniel Kaluuya was born on the 24th of February, 1989, in London. Kaluuya is the son of Ugandan parents and they emigrated to the UK and gave birth to Daniel in London. His father lived in Uganda and rarely visited due to UK visa regulations.

Kaluuya lives in West London and he is an ardent supporter of Arsenal F.C  to the extent of referring to Arsenal’s North London rivals, Tottenham Hotspur F.C.

In 2017, One of Kaluuya’s best-known roles is in the film ‘Get Out’. He played a young African-American man who visits the parents of his white girlfriend for the first time.

At first, her parents are by all appearances liberal and accepting. But as the visit proceeds, seemingly minor racial slights evolve into “a nightmare of captivity and exploitation.”

The movie was directed by Jordan Peele and earned a reported 0 million worldwide, while the movie had cost only $4.5 million to produce.

The movie’s success gave wide exposure to Kaluuya, who earned nominations from the Academy Awards, Golden Globes, and Screen Actors Guild for his lead performance.

In 2018, Kaluuya was in the cast of two more American movies. He was a supporting role in the superhero movie ‘Black Panther’ which was based on the Marvel comic book series and ‘Widows’.

As of this year, Kaluuya will be one of the cast in the upcoming movie ‘Queen & Slim’. The movie is directed by Melina Matsoukas and it will be released on November 27, 2019, by Universal Pictures.

Here are some of the best highlights of Daniel Kaluuya’s career:

“Improv is like writing. It’s actually a different discipline to acting. It helps acting greatly, but it’s completely different. It’s the same side of your brain when you write as when you improve.” – Daniel Kaluuya

“A lot of black men have problems being emotionally vulnerable because of the boundaries and parameters that have been put onto them by society.” – Daniel Kaluuya

“My experience growing up in London and grew up in a working-class background is that when people are down and out, that’s when they’re probably the funniest. They have to be. That’s what they do to cope, to find joy, cause they don’t feel the joy inside. Or they use humor to keep people out.” – Daniel Kaluuya

“A lot of people have an opinion on scripts, but they aren’t equipped to diagnose what the problems are. You realize that scriptwriting is such a specialist subject, but because it’s so common, everyone thinks that they can talk about that. I think it’s something that writers only know, that they can see.” – Daniel Kaluuya

“I don’t think writing stops until the film is out. In the edit, it’s another draft. [The script] is the food for a set, and then the set is food for the edit, and the edit is food for the screen. It’s constant, and this is just the first stage of it.” – Daniel Kaluuya

3 Lessons from Daniel Kaluuya and the film Black Panther

Now that you know all about Daniel Kaluuya’s net worth, and how he achieved success; let’s take a look at some of the strongest lessons we can learn from him and his movies:

Helen Keller once said, “What I am looking for is not out there, it is in me.” Though Wakanda may be a fictional African nation the truth is that: There is always a ‘Wakanda’ in all of us!

We must believe totally that we carry within us a special form of currency that cannot be devalued. The ability to look inward and discover the treasure within is the most liberating force anyone can ever possess.

2. We Are Our Own Rescue

Barrack Obama once said, “Change will not come if we wait for some other person or some other time. We are the ones we’ve been waiting for. We are the change that we seek.” Our major problem in Africa is that we are always looking to the wrong places for help.

The greatest threat to the African continent is the belief that someone else will save it. Africans must take ownership of their future. United Nations cannot save Africa; UNICEF must not be the hope of the African child. European Union will not save Africa

There is nobody that can tell your story better than you! The world seldom preaches about empowering messages on Africa. When you tune in to CNN or Aljazeera, all we see is Africa being synonymous with disease, poverty, war, and corruption.

Chimamanda Adichie, one of Africa’s great writers and voice enumerated in one of her TED talk titled, ‘The danger of a single story’, how we have allowed and believed in a single story told by the western world just because we refuse to tell ours in Africa.

How much is Daniel Kaluuya worth?

Daniel Kaluuya’s net worth is estimated to be $15 Million.

How old is Daniel Kaluuya?

How tall is Daniel Kaluuya?

What do you think about Daniel Kaluuya’s net worth? Leave a comment below.

Daniel Cormier is a former amateur wrestler that became one of the richest and most successful MMA fighters in the world.