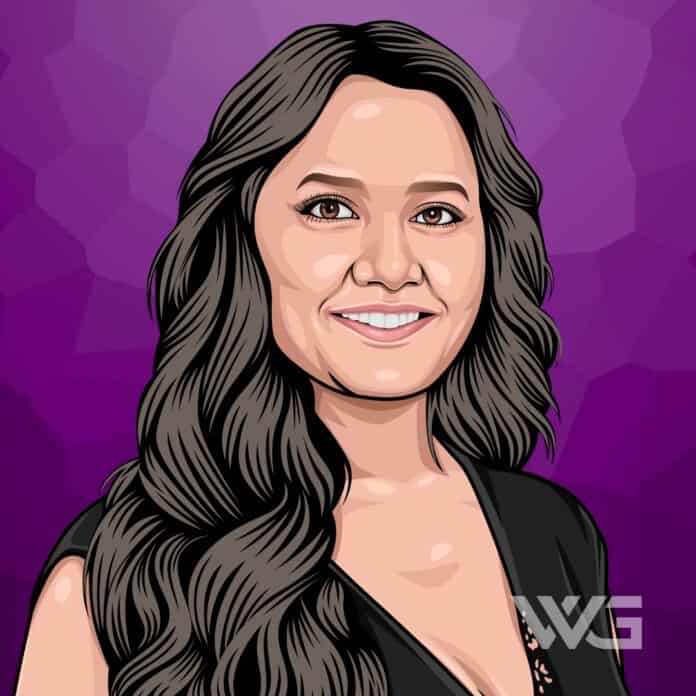 What is Lydia Schiavello’s net worth?

Lydia Schiavello is an Australian model and reality show star who has earned a massive net worth with her talents.

While she has since stepped away from television, Schiavello continues to earn money as a gourmet chef and interior designer.

As of November 2022, Lydia Schiavello’s net worth is estimated to be $50 Million.

Lydia Schiavello was born October 23, 1970, to parents, Tony and Linda, who are of Italian descent.

Not much is known about Lydia’s childhood, but after graduating high school, she enrolled at the Royal Melbourne Institute of Technology, where she studied interior design.

While she initially wanted to pursue a career as an interior designer, she was unable to find reliable employment at first and ended up working as a hostess in a hotel.

Not long after, she met and fell in love with Andrew Norbury, a wealthy architect who she quickly married in 2013.

Lydia Schiavello, like Ramona Singer, found international fame on reality TV after being cast in The Real Housewives of Melbourne.

The casting process itself took eight months, and Lydia ended up being hand-picked out of over 100 other women.

Once the show aired in 2013, Schiavello became a fan favorite, with many falling in love with her humor and wit.

Schiavello remained on The Real Housewives for four seasons before leaving to focus on her own pursuits and family.

In addition to being an interior designer, Schiavello is also a gourmet chef, and her business, In Lydia’s Kitchen, allows people to hire her for private dinners.

No public records have been released regarding how much Lydia Schiavello has earned during her career.

However, we can assume that she’s made a tidy sum from her four seasons on reality TV.

While a large majority of her net worth comes from her husband’s wealth, with her cooking business, she earns at least $350 per reservation.

If she continues building her own brand, we can expect her overall net worth to continue steadily increasing annually.

Lydia Schiavello married renowned architect Andrew Norbury in 2013, and the pair have three children: two boys and one girl, plus three children from Andrew’s previous marriage.

Outside of reality TV, Schiavello is a well-known philanthropist who is heavily involved with the Murdoch Children’s Research Institute.

She is also a notable fashionista, often posting photos of her style on her official Instagram account, along with pictures of her family.

While Lydia Schiavello hasn’t won any prestigious awards, she has done many notable things during her career.

Although all of her accomplishments are impressive, some stand out more than others.

Here are some of Lydia Schiavello’s greatest career achievements:

Like Kenya Moore, Lydia Schiavello got her start on reality TV but has since grown to become a successful businesswoman.

How Does Lydia Schiavello Spend Her Money?

Lydia Schiavello lives in a lavish home in Melbourne, Australia, and while we don’t know how much it cost, it appears to be worth millions.

The home itself is huge, with a state-of-the-art kitchen, generous dining room, and numerous luxurious lounge spaces.

It also boasts a cozy library, multiple fireplaces, and a private outdoor terrace.

In addition to this home, Schiavello also owns a holiday home in Thredbo and one of the most expensive private jets in the world, as well as a private helicopter.

Lydia Schiavello has enjoyed a lot of success throughout her career, and her time on reality television has made her a fan favorite.

However, some of her most significant milestones have impacted her fame and fortune more than others.

Here are some of the best highlights of Lydia Schiavello’s career:

Lydia Schiavello is a woman of many passions, and her remarkable talents in various areas is certainly impressive.

Although Lydia Schiavello is best known for her one-liners on The Real Housewives of Melbourne, she has also shown that she’s driven to succeed.

In many of her interviews, she often emphasizes her confidence and her commitment to her family.

Here are our favorite quotes from Lydia Schiavello:

There is a lot that we can learn from Lydia Schiavello and her successful career as a model and reality star.

Now that you know all about Lydia Schiavello’s net worth, we can look at what she can teach us about reaching our own goals.

Here are some of the best success lessons to learn from Lydia Schiavello:

Family can be difficult, but at the end of the day, they are often the ones who will have your back when no one else will.

It doesn’t have to be limited to blood either, and you should always try to find time to spend with anyone you consider to be your family.

If you want to become successful, you had better prepare to stay busy.

This doesn’t mean you shouldn’t take time to relax, but it is important to spend your working hours being as productive as possible.

Inspiration can come from many surprising places, and you should always look for it.

Think of it as a mindfulness exercise to help you focus and find things you may have otherwise missed.

Lydia Schiavello has earned a fortune as a model and reality star, and she isn’t planning on slowing down anytime soon.

While she has since stepped away from reality TV to focus on gourmet cooking, she is consistently growing her net worth as a private chef and hostess.

Be sure to check back often so that you don’t miss any updates impacting Lydia Schiavello’s fortune.

As of November 2022, Lydia Schiavello’s net worth is estimated to be $50 Million.

What do you think about Lydia Schiavello’s net worth? Leave a comment below.