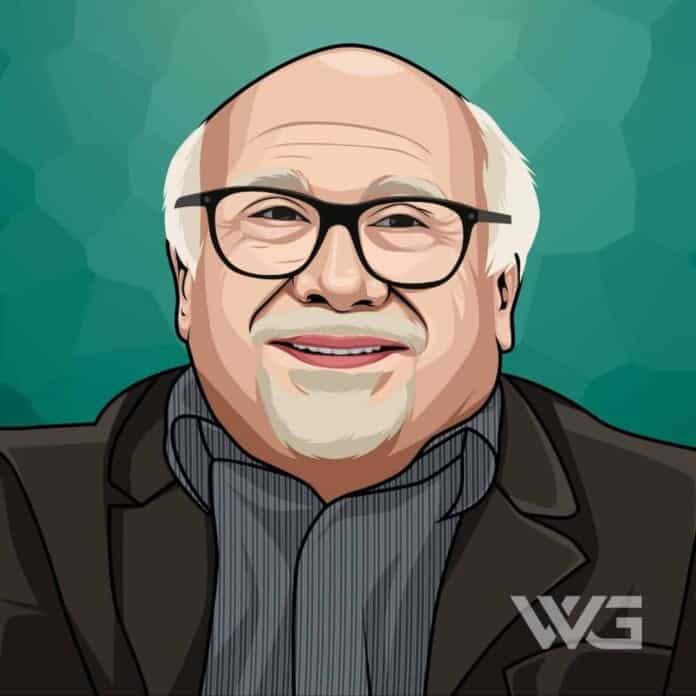 What is Danny DeVito’s net worth?

Danny DeVito is an American actor, director, producer, and filmmaker from New Jersey.

He gained prominence for his portrayal of the taxi dispatcher Louie De Palma in the television series ‘Taxi’, which won him a Golden Globe Award and an Emmy Award.

Daniel Michael DeVito Jr. was born on the 17th of November, 1944, in Neptune Township, New Jersey. He is the son to Julia and Daniel DeVito.

DeVito attended a boarding school on his own request to his father and went to the ‘Oratory Preparatory School’ in Summit, New Jersey. He then attended the ‘American Academy of Dramatic Arts’ and graduated in 1966.

Right after his graduation, DeVito started working at the ‘Eugene O’Neill Theater Center’ in Waterford, Connecticut. After seeing an advertisement, he auditioned for a role in the film version of ‘In Cold Blood.’

DeVito auditioned for a new ‘NBC’ series titled ‘Taxi’ in 1978 and landed the part of the endearingly oppressive cab dispatcher, Louie De Palma. The show ran for five years and he won an ‘Emmy Award’ for ‘Best Supporting Actor.’

In 1987, DeVito came up with his first directorial venture ‘Throw Momma from the Train,’ a dark comedy in which he also played a role. Inspired by Hitchcock’s ‘Strangers on a Train,’ the movie also starred actors like Billy Crystal and Rob Reiner.

He debuted at the ‘West End’ in a play titled ‘The Sunshine Boys’ by Neil Simon in 2012. He acted in the play along with Richard Griffiths. The play previewed at the ‘Savoy Theatre’ for a 12-week season.

From 2012 to 2019, DeVito played many characters with different shades in several movies like ‘Hotel Noir’, ‘All the Wilderness’, ‘Weiner-Dog’, and ‘Dumbo’.

Here are some of the best highlights of Danny DeVito’s career:

“I’m shooting in Brooklyn, we’ve got all kinds of crap going on, and I’m all alone now in a big hotel suite that you can’t believe the size of it and a thing sticks in my foot and I just think it’s the funniest thing that’s ever happened to me.” – Danny DeVito

“In this movie, you have all the things you love from Tim. All the magic and the whimsy and the surreal, but he also has a fantastic story of a father and son that really gets under your skin.” – Danny DeVito

“It doesn’t care whether I’m good enough. There are only three things with that kind of unconditional acceptance: Dogs, donuts, and money.” – Danny DeVito

“What you do with it and things like that, but I basically chose this after I read it because I thought it was different and funny and unique and dark – things that I like to do.” – Danny DeVito

“So, you pick this stuff here and this stuff there and then you see things in certain ways and you start visualizing and thank God I get the chance to do this. It’s really the greatest thing in the whole wide world.” – Danny DeVito

3 Lessons from Danny DeVito and from his films

Now that you know all about Danny DeVito’s net worth, and how he achieved success; let’s take a look at some of the lessons we can learn from him:

In this animated film, DeVito provides the voice of the Lorax, a Dr. Seuss animal of unknown origin, whose only mission is to save the Truffula trees. Through it, all — deforestation, greed, despair, the Lorax knows what must be done to save his precious trees.

He lives his own truth, and in the end, the Lorax is rewarded with the result he always knew would benefit the forest and the community. In marketing, as with any business, your integrity is your currency.

If you aren’t reflecting positive values, neither your customer nor your company will benefit in the long run.

2. Don’t Let Your Past Haunt You

Abandoned by his parents and raised by penguins, DeVito’s Oswald Cobblepot, a.k.a The Penguin isn’t able to rise above his difficult start. Instead, he descends into the sewers for a life of crime and toxic sludge in Batman Returns.

In marketing, past mistakes should inform present plans of action, instead of hampering them. Don’t get dragged down. Yesterday’s failures are a great resource for curating today’s success stories.

In the film Matilda, DeVito plays a truly dastardly character. Matilda is one of Roald Dahl’s most endearing literary heroines, a brilliant and magical girl, imbued with all the kindness her terrible parents don’t have.

Her father, played by DeVito, is a mean, dismissive soul. Thanks to the kindness of her teacher, and her own innate goodness, Matilda is able to create a meaningful life.

Marketing is often a business of statistics and data, but injecting all your efforts with kindness and good intentions will create better customer relationships, which should ultimately yield better results.

How much is Danny DeVito worth?

Danny DeVito’s net worth is estimated to be $80 Million.

How old is Danny DeVito?

How tall is Danny DeVito?

He has always been admired for his comic timing and charming humor. DeVito is also a producer and has produced famous projects like ‘Pulp Fiction,’ ‘Erin Brockovich and,’ ‘Reno 911!’.

What do you think about Danny DeVito’s net worth? Leave a comment below.