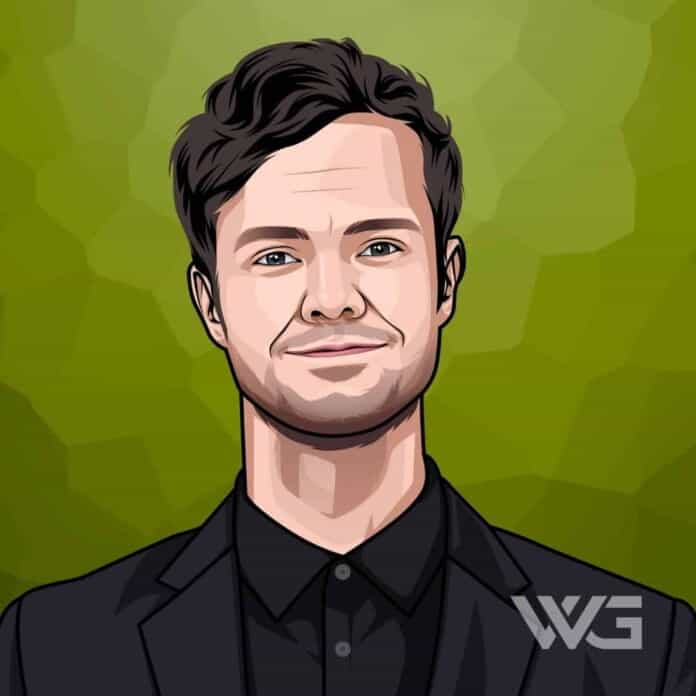 As of November 2022, Jack Quaid’s net worth is estimated to be $2 Million.

Jack Quaid is an American actor from California. Quaid is the son of actors Dennis Quaid and Meg Ryan, he made his acting debut with a minor role in the science fiction film ‘The Hunger Games’.

Jack Henry Quaid was born on the 24th of April, 1992, California. Born to celebrity parents, Jack Quaid grew up watching his parents’ movies, and those of his relatives. He often accompanied his parents on the sets of their movies, learning the craft from a very early age.

His first feature film role came in 2012 when he was cast as Marvel in the film ‘The Hunger Games’, based on the novel of the same name by Suzanne Collins. Portraying a negative role, he was told during the casting that people would hate him for his on-screen portrayal of the character.

In 2013, he reprised the role in a cameo appearance in the sequel of the film, ‘The Hunger Games: Catching Fire’. The same year, he teamed up with Eve Hewson, daughter of Irish rocker Bono, for the film ‘Roadies’ (released in 2015), which he funded via the crowdsourcing website Indiegogo.com.

Two years later, he worked with his mother in her directorial debut, ‘Ithaca’, in which he played her onscreen son.

He has already worked with directors like Martin Scorsese and Steven Soderbergh and appeared alongside stars such as Tom Hanks, Daniel Craig, Channing Tatum, Jennifer Lawrence, Katie Holmes, and many more.

Here are some of the best highlights of Jack Quaid’s career:

“I had done a couple of short films when I was a teenager; you couldn’t do more without getting your SAG card. The one that made me get my SAG card was “The Hunger Games,” weirdly enough. I did that when I was 19.” – Jack Quaid

“It’s very nerve-wracking. Just the fact that it was my first set was nerve-wracking. I remember they had me working out for [the film], they had all of us with trainers—don’t know why, because we’re wearing long, flowing robes the entire time. I had done this exercise [where you slam] a weighted ball against the floor, pick it up and slam it down again.” – Jack Quaid

“I’ve gone over the top, but it didn’t pay off. I had an audition for “Ready Player One.” In the game that you’re in [in the film], you can look like anything that you want. I chose to look like Marty McFly, so I bought the red life preserver vest and the jean jacket. It was lost on everybody in the room.” –  Jack Quaid

“You know what was a really big influence on me? I saw “A Fish Called Wanda” when I was pretty young, and Kevin Kline in that movie is so funny and sympathetic, but you also hate him. That’s a great performance I would recommend any young actor go look at.” – Jack Quaid

Now that you know all about Jack Quaid’s net worth, and how he achieved success; let’s take a look at some of the lessons we can learn from him:

Dealing with toxic people is an art that can be learned. Whether it is in a family, among friends or at the workplace, exercise a choice to establish and maintain clear contours of your relationship with such people.

2. You Are Doing Fine

Whatever be your current reality, you are never in conflict with it. Life is happening to you. And you are going with the flow.

A health challenge, a break-up, the loss of a loved one, a career-related complication, a messy financial situation, whatever you are dealing with, you are doing pretty fine living with what is.

Life serves us all wake-up calls at different times. Through experiences, events, conversations. You can surely turn off the alarm clock and go back to sleep, which is you can ignore the call, but you can’t deny that it is time you woke up.

How much is Jack Quaid worth?

Jack Quaid’s net worth is estimated to be $2 Million.

How old is Jack Quaid?

How tall is Jack Quaid?

Jack Quaid is an American actor best known for his role as Marvel in the science fiction film series ‘The Hunger Games’. He is the child of renowned Hollywood celebrities, Meg Ryan and Dennis Quaid.

What do you think about Jack Quaid’s net worth? Leave a comment below.

What is Drew Brees' net worth? Introduction  As of ,...