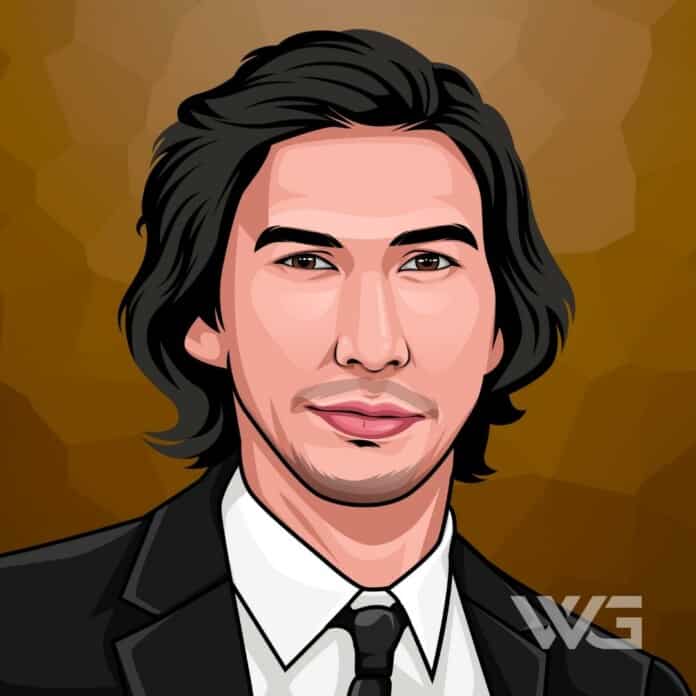 What is Adam Driver’s net worth?

Adam Driver is an American actor from California.

Driver is the recipient of numerous accolades, including a Volpi Cup, as well as nominations for two Academy Awards, two Golden Globe Awards, two BAFTA awards, three Emmy Awards, and a Tony Award.

Throughout his career so far he is best known for starring in the movies ‘Star Wars: The Force Awakens’ and ‘Marriage Story’.

The family left California when Adam was 7 years of age, and his mother took Adam and his sister to her home state, Indiana.

There, he was enrolled at the ‘Mishawaka High School’ and did some plays during his school days, which laid the foundation of his future career in acting.

Once he graduated with a ‘Bachelor of Fine Arts’ degree, he began acting in New York and became part of many ‘Broadway’ and ‘Off-Broadway’ productions.

In 2010, he finally bagged a significant role in the pilot of the series ‘The Wonderful Maladys.’ The series was not picked up by any network. Adam then worked on other TV shows such as ‘Law & Order’ and ‘The Unusual’s.’

In 2011, he made his film debut with the Clint Eastwood-directed ‘J. Edgar,’ in which he played ‘Walter Lyle.’ This was a small role. The role that earned him mainstream fame was that of the protagonist’s boyfriend in the 2012 TV comedy-drama series ‘Girls.’

He appeared in ‘Midnight Special,’ a science-fiction thriller in 2016. The film was honored at the ‘Berlin Film Festival’ and competed for a ‘Golden Bear Award.’ He then appeared in Martin Scorsese’s mega-budget film ‘Silence.’

He then appeared in Steven Soderbergh’s 2017 film ‘Logan Lucky,’ alongside Channing Tatum and Daniel Craig.

Here are some of the best highlights of Adam Driver’s career:

“In the military, you learn the essence of people. You see so many examples of self-sacrifice and moral courage. In the rest of life, you don’t get that many opportunities to be sure of your friends.” – Adam Driver

“I always think back to the original movies and to those quieter moments where Luke is out in A New Hope, and there are the two suns setting. It is the equivalent, basically, of a farm boy dying to get out of his small town and do something bigger. It’s those kinds of universal themes that ground this whole thing in space.” – Adam Driver

“The Marine Corps is some of the best acting training you could have. Having that responsibility for people’s lives, suddenly time becomes a really valuable commodity and you want to make the most of it. And for acting, you just have to do the work, just keep doing it.” – Adam Driver

Now that you know all about Adam Driver’s net worth, and how he achieved success; let’s take a look at some of the strongest lessons we can learn from him:

Acting is really about having the courage to fail in front of people.

Acting, believe it or not, can get very self-involved! I feel fortunate to have been able to work on things with people who have a very specific point of view and perspective, and who feel like they’re doing something very active.

What is a struggle is that acting isn’t a place where you go to work and you do that thing. There aren’t set boundaries, like an office, where you go and work. For me, the work is always on my mind.

How much is Adam Driver worth?

Adam Driver’s net worth is estimated to be $16 Million.

How old is Adam Driver?

How tall is Adam Driver?

Adam Driver is an American actor, best known for portraying ‘Kylo Ren,’ the main villain in the latest ‘Star Wars’ films, ‘The Force Awakens’ and ‘The Last Jedi.’

He made his screen debut with his appearance in the pilot of the 2010 series ‘The Wonderful Maladys.’

As of February 2023, Adam Driver’s net worth is estimated to be roughly $16 Million.

What do you think about Adam Driver’s net worth? Leave a comment below.