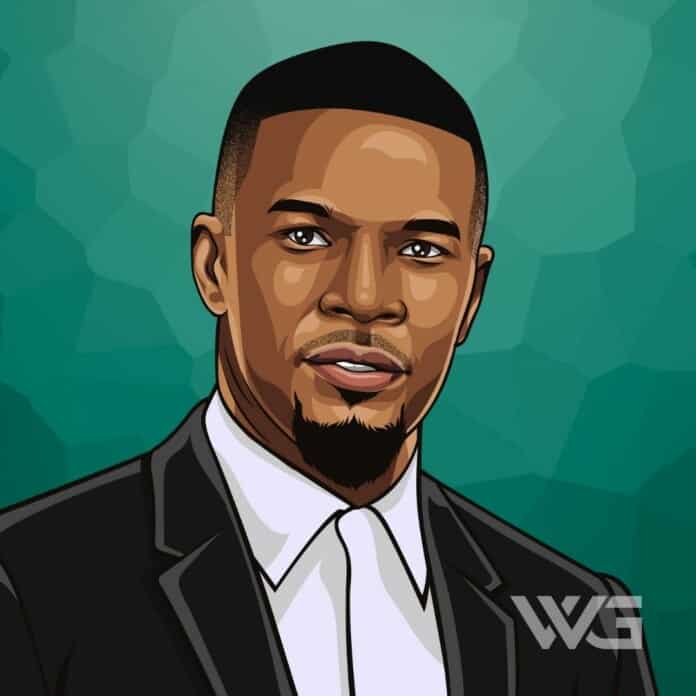 What is Jamie Foxx’s net worth?

Eric Marlon Bishop, known by his stage name Jamie Foxx, is an American singer, songwriter, actor, and comedian from Texas. Foxx gained recognition when he started his career as a comedian in 1989. That was the start of his acting career.

Jamie Foxx was born on the 13th December 1967, in Terell, Texas. He is the son of Louise and Darell Bishop, but shortly after his birth, he was adopted by Esther and Mark Talley.

During his childhood, he had a natural talent for telling jokes and playing the piano. Foxx attended Terell High School where he received top grades. He made his acting debut in 1992 and pursued his acting career after that.

Foxx started his career by performing stand-up comedy in 1989.

His acting career started in 1991 when he decided to join the cast of a sketch comedy television series In Living Color; where he starred in 95 episodes.

In 1992 Foxx starred his debut movie as Baker in the fantasy comedy movie Toys.

He released his debut music album Peep This in 1994, which reached No.78 on the U.S Billboard 200. Foxx’s first substantial movie role was in 1999 when he was cast as a football player in Any Given Sunday.

In 1996 he starred in his own television show, The Jamie Foxx Show, which aired on TV from 1996 to 2001. In the show, he collaborated with celebrities including likes of Garrett Morris, Garcelle Beauvais, and Christopher Duncan. The show turned out to be highly successful.

Foxx brought out his second album Unpredictable in 2005, which debuted at No. 2 on the U.S Billboard 200 chart, eventually moving up to No.1.

His third album Intuition was released in 2008 where famous rappers like Kanye West, T-Pain, and Fabolous were featured. The album reached the top three on the U.S Billboard 200 chart.

Foxx is a popular actor and singer, and he has collaborated with world stars. His success is shown within his high net worth valuation, and his albums and movies have sold millions of copies worldwide.

Here are some of the best highlights of Jamie Foxx’s career:

“I went to college on a classical piano scholarship. My grandmother made me practice one full hour a day. Every day. Man. I thought all she wanted was for me not to have any fun. Next thing you know, you have a career in music. Now, not everybody’s going to go on and be Mozart or Michael Jackson. But music makes you smarter.” – Jamie Foxx

“She still talks to me now, only now she talks to me in my dreams. And I can’t wait to go to sleep tonight because we have a lot to talk about. I love you.” – Jamie Foxx

“Connecting with my daughter is the most important thing in my life – the priority. I want to be a man who shows up for her. I want to have such a big influence on her so that she knows she can call me about anything, which she does.” – Jamie Foxx

“I think Prince should open up a little more to other artists. Just because we love Prince. Especially the old stuff – we love him to death. But if he opened up he would be something to deal with. Imagine Kanye West producing a Prince track? It would be banoodles!” – Jamie Foxx

“I’d like to say I’m R&B’s savior. Whether that’s the truth or not, I’m definitely going out there with my mic and my shield to declare, ‘I am here to save R&B.’ I will have the people saying, ‘Sir, there is a man at the musical gates saying he is here to save R&B.” – Jamie Foxx

How much is Jamie Foxx worth?

Jamie Foxx’s net worth is estimated to be $170 Million.

How old is Jamie Foxx?

How tall is Jamie Foxx?

Jamie Foxx is one of the most noticeable actors and singers and has come a long way since he started his career as a stand-up comedian when he was a kid.

He is one of the most popular actors and singer in the world, and As of December 2022, Jamie Foxx’s net worth is $100 million dollars.

What do you think about Jamie Foxx’s net worth? Leave a comment below.

Dave Matthews became fabulously wealthy as the force behind the Dave Mathews Band, and now has an estimated net worth of over $300 million.