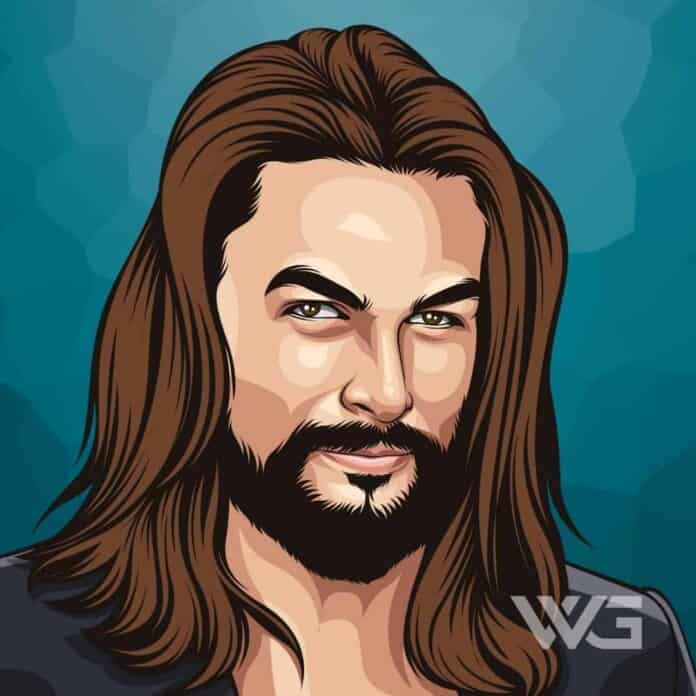 What is Jason Momoa’s net worth?

As of February 2023, Jason Momoa’s net worth is estimated to be roughly $25 Million.

Joseph Jason Namakaeha Momoa is an American actor, writer, film producer and model from Honolulu. He is best known for portraying Aquaman in the DC Extended Universe, beginning with the 2016 superhero film ‘Batman V Superman: Dawn of Justice’.

Joseph Jason Namakaeha Momoa was born on the 1st of August, 1979, in Honolulu, Hawaii. Momoa is the son of Coni, a photographer, and Joseph Momoa, a painter. He is the only child of his parents, and he was raised in Norwalk, Iowa, by his mother.

Momoa studied marine biology during his time in college. He later attended Colorado State University and changed his major. He traveled extensively since he was young, and he learned painting in Paris and was introduced to the tenets of Buddhism in Tibet.

Jason Momoa was discovered by international fashion designer Takeo Kobayashi in 1998. Kobayashi encouraged Momoa to take up modeling. He joined the model industry and won Hawaii’s Model of the Year 1999. The following year, he landed the role of ‘beach dude’ Jason Ioane in the action drama television series ‘Baywatch Hawaii’.

In 2003, Momoa reprised the role of Jason Ioane in the television film ‘Baywatch: Hawaiian Wedding’. The next year he debuted in ‘Johnson Family Vacation’.

Momoa’s big breakthrough came when he portrayed Khal Drogo in the worldwide famous series ‘Game of Thornes’ in 2011 on HBO.

He picked up the CinemaCon Award for Male Rising Star and a nomination each for Scream Award for Best Ensemble and Screen Actors Guild Award for Outstanding Performance by an Ensemble in a Drama Series.From 2014 to 2016 he continued his television work.

In 2017, we saw him in two films: ‘Once Upon a Time in Venice’ and ‘Justice League’, where he once again portrayed the role of Aquaman.

Here are some of the best highlights of Jason Momoa’s career:

“I was on Stargate: Atlantis for four years, playing a similar character called Ronon, who was an alien that didn’t say much and grunted. I’ve been there and done that. Whether people have seen it or not, you want to stretch. And then, while I waited, I got The Red Road, and I’d never gotten anything like that.” – Jason Momoa

“It’s not that demanding. It’s fun. That’s one of the great things about being an actor. You get to learn all these things normal people don’t get to learn. Going through hallways where it’s basically like S.W.A.T. tactical stuff. Around hallways, how to cross, how to signal everyone. Then how to hold a gun, holster the gun – everything.” – Jason Momoa

“For right now, I’d like to tell stories that I want to tell. I haven’t wanted to use someone else’s material yet, but I would with the show. It’s become an integral enough part of me now, that I could definitely tell a story in this.” – Jason Momoa

“I don’t want to play a superhero. Drogo may not be Superman, but it is a phenomenal role. I didn’t want to get typecast. Drogo is an exceptional character. Conan is iconic. Whether it does good or not, you just try to elevate it to the next level.” – Jason Momoa

“How far would you go to protect your family? I’m a father, I’m a son, I’m a grandson, and I’m a husband. If someone were to hurt the women in my life and the law didn’t take care of it, what would I do? Pretty awful things.” – Jason Momoa

Now that you know all about Jason Momoa’s net worth, and how he achieved success; let’s take a look at some of the leadership and hard work lessons we can learn from him:

In Momoa’s first run-out as the King of Atlantis in 2017’s Justice League, he worked out with legendary Gym Jones founder Mark Twight.

An experienced climber himself, Twight was more than happy to accommodate his eager charge’s passion. This time around, Mada Abdelhamid, a former WWE wrestler from Egypt who was Momoa’s trainer on set for the duration of the six-month shoot on the Gold Coast, also indulged the leading man’s love of getting vertical.

If the Aquaman set is starting to sound like a testosterone-fuelled bro-sesh, that’s because Momoa doesn’t really do downtime – at least, not in the traditional sense.

Alongside state-of-the-art gym equipment, the relentless thrill-seeker had set up a drum kit, a Fender Precision Bass and a 1959 Gibson Les Paul guitar once played by Led Zeppelin’s Jimmy Page.

Looming overhead was his custom-built climbing wall. While the challenges presented by his physique are part of the reason Momoa might gravitate towards this most elemental of physical pursuits, the rest is less predictable.

3. Everything Has a Technique

Everything has a technique to it. So if there’s something you wanna try out, I think it’s always good to get a trainer or listen to people who know what they’re doing.

How much is Jason Momoa worth?

Jason Momoa’s net worth is estimated to be $25 Million.

How old is Jason Momoa?

How tall is Jason Momoa?

Jason Momoa is one of the most well-known actors in Hollywood right now. He’s rose to fame came with his long-running roles in the television series ‘Baywatch Hawaii’ and Stargate: Atlantis’. His performance as Khal Drogo in the TV series ‘Game of Thornes’ further increased his popularity.

As of February 2023, Jason Momoa’s net worth is approximately $25 Million.

What do you think about Jason Momoa’s net worth? Leave a comment below.