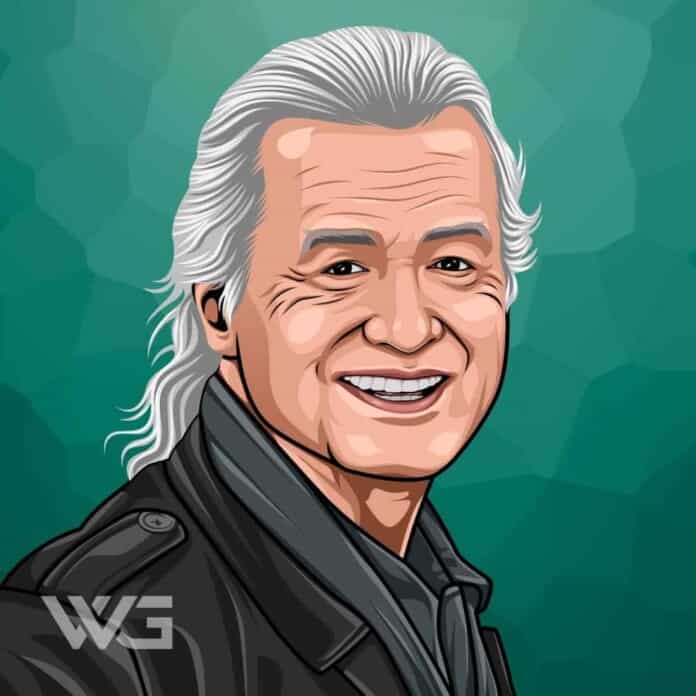 What is Jimmy Page’s net worth?

Jimmy Page has been rocking out since 1957, and he’s even been inducted into the Rock and Roll Hall of Fame twice!

The man who founded Led Zeppelin, Page is well-known as one of the greatest guitarists in history, and he has the money to prove it.

However, there is a lot more to this rockstar than most people know and many surprising reasons as to why he has become so wealthy and successful.

James Patrick Page was born in the west London suburb of Heston on January 9th, 1944.

In 1952, his family moved to Feltham and then to Epsom in Surrey, where Page encountered his first guitar.

While he did take lessons in nearby Kingston, Page largely taught himself how to play while listening to records.

His earliest influences were rockabilly guitarists James Burton and Scotty Moore, and as he learned to play on his own, he started developing a style that fused blues and rock.

When he was 15, singer Neil Christian asked him to join his band, The Crusaders, and Page spent two years making music with them before contracting infectious mononucleosis, an illness that prompted him to take a break from music and focus on painting while he recovered.

Before finding success with Led Zeppelin, James Patrick Page worked as a session guitarist in the early 1960s.

While working at the Columbia Graphophone Company, his first session included recording “Diamonds” by Jet Harris and Tony Meehan, which ended up reaching number one on the singles charts in 1963.

In 1964, Jimmy Page was contacted with an offer to replace Eric Clapton, now one of the richest rockstars in the world, in the Yardbirds, but he declined, eventually recommending his friend, Jeff Beck, for the position after Clapton officially left the group.

When recording “Beck’s Bolero” in 1966, Page got the idea to start a new supergroup including Beck and bassist John Paul Jones. Drummer Keith Moon suggested the name Led Zeppelin after it was suggested that the group would take off “like a led balloon.”

However, it wasn’t until 1968 that Led Zeppelin really got off the ground after Page recruited vocalist Robert Plant and drummer John Bonham, becoming progenitors of hard rock and heavy metal.

Although the group broke up in 1980 after the death of Bonham, the remaining members of the group have reunited for special shows, and Page has been heavily involved with remastering their song catalog.

Jimmy Page has made a great deal of money, and he continues to be incredibly successful today.

However, when first starting out, it was one specific investment that opened the door to his incredible wealth.

When producing the first Led Zeppelin album, Page spent $4,300 to record and produce it, giving him full artistic control over the final product.

This gamble paid off as this relatively small investment turned into $4.6 million in profits for the band and himself.

If that wasn’t impressive enough, the band’s most famous track, “Stairway to Heaven,” has earned nearly $80 million in royalties alone, a total that was revealed when Page was sued for copyright infringement, a case he ultimately won.

Needless to say, this song alone has given Jimmy Page’s net worth a very healthy boost.

Despite not being a part of any active bands, Jimmy Page makes millions every year from album sales and royalties.

Because he is also responsible for managing the band’s legacy, Page also works hard on re-releasing remastered versions of Led Zeppelin songs that fans immediately buy and stream.

In addition to this, Jimmy Page has also done numerous interviews and, in 2017, was hired to speak at Oxford University about his career in the music industry.

Due to Page being one of the most influential guitarists in history, it’s safe to say that he’s not going to run out of ways to make money any time soon.

Jimmy Page has had many relationships throughout his career, but he has only married twice. First to Patricia Ecker from 1986 to 1995, and most recently to Jimena Gomez-Paratcha from 1995 to 2008.

Most recently, he has been in a relationship with poet and actress Scarlett Sabet since 2014.

After meeting and marrying Gomez-Paratcha, he adopted her daughter Jana, who was born in 1994, and the coupled had two more children, Zofia Jade in 1997 and Ashen Josan in 1999.

As a founder and prominent member of Led Zeppelin, Jimmy Page has been the recipient of many awards.

In fact, Led Zeppelin has been nominated for 947 awards in total, winning an astonishing 683 overall!

Coupled with Jimmy Page’s personal achievements in rock music, it’s safe to say that he’s one of the most decorated musicians in history.

Here are some highlights from Jimmy Page’s career:

How Does Jimmy Page Spend His Money?

Jimmy Page knows how to use his impressive net worth and owns a lot of impressive properties and guitars.

His multi-neck Gibson EDS-1275, which he used while playing live performances of “Stairway to Heaven” as the lead guitarist, is also one of his most valuable.

While he was a member of the Yardbirds, he purchased the Thames Boathouse, later moving to the former home of actor Michael Caine in Windsor.

From the early 70s to the early 90s, Page was also the owner of Boleskine House, the former residence of Aleister Crowley, who Page admired for his occult views.

Currently, Jimmy Page lives in Deanery Garden, a home in Sonning, Berkshire, England, a historic home originally built between 1899 and 1901.

While not one of the biggest houses in the world, it is a historic gem situated in a secluded location that is perfect for keeping a low profile.

Here are some of the best highlights of Jimmy Page’s career:

Between Page’s impressive net worth and storied musical career, there are a lot of great quotes to be found from this rock history legend.

While he may not have a booming career as a solo artist, he has a lot of motivational things to say.

Here are our favorite quotes from Jimmy Page:

Now that you know all about Jimmy Page’s net worth and his history as one of the best-selling artists in rock band history, we can look at the things he can teach us about finding our own success.

With such a long history in the spotlight, there are a lot of things he can teach us.

Here are some of the best success lessons to learn from Jimmy Page:

1. Believe In Your Goals

Although Led Zeppelin disbanded after losing Bonham, Jimmy Page never stopped believing in what they had created together, which is why he spends so much time today cultivating the band’s legacy and remastering songs for a new generation.

This teaches us that, no matter what you are working on, you should believe wholeheartedly in what you are doing and pour everything you have into making it the best it can be.

When Jimmy Page invested his own money in producing Led Zeppelin’s first album, he didn’t know it would be the breakout success that it was.

However, his gamble paid off, and we’d hate to know what would have happened if he had never taken that chance.

That’s not to say that you should rush out and pour your money into the most expensive stocks in the world, but rather that you shouldn’t turn down an opportunity just because there is a chance it could fail.

Success doesn’t happen overnight, and Jimmy Page didn’t earn his net worth in a day.

Instead, he focused on his talents for years as a session guitarist, which enabled him to make the connections he needed to form one of the most successful rock bands in history.

If you’re just starting out at anything, it is going to take hard work and dedication to get your foot in the door, but once you do, it will all be worth it so long as you never give up.

Jimmy Page isn’t shy about his astonishing net worth and his impressive career that rivals even the Rolling Stones and Pink Floyd.

Not only was he the founder of one of the best-selling groups in rock history, but he continues to be an inspiration for artists across the world.

What do you think about Jimmy Page’s net worth? Leave a comment below.