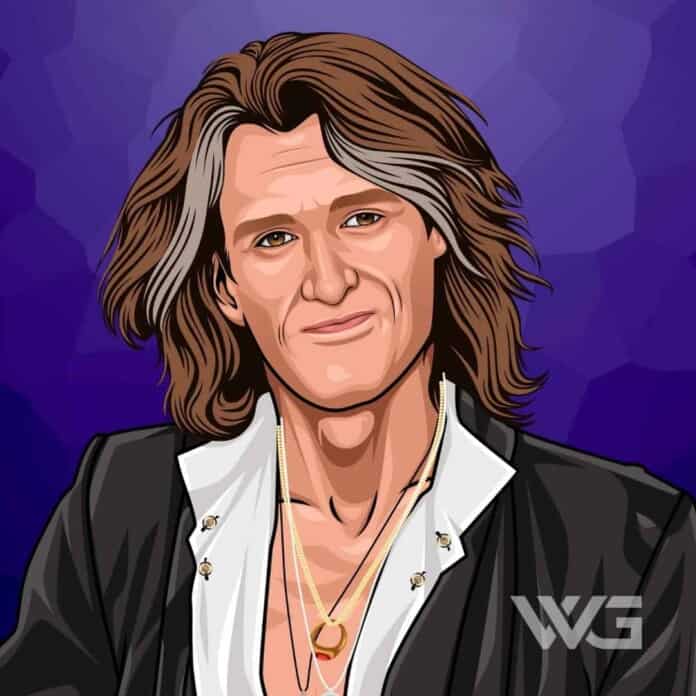 What is Joe Perry’s net worth?

Best known as the guitarist for the American rock band Aerosmith, Joe Perry has been rocking out since 1970, and he’s shown no signs of slowing down since.

This dedication has served him well and made Joe Perry’s net worth something every aspiring rocker strives to achieve.

From humble beginnings in Massachusetts to the Rock and Roll Hall of Fame, Perry’s colorful career is one of the most impressive in the music industry.

While in school, he struggled with concentration, and his grades suffered, despite his parent’s best efforts to entice him to do better.

With the hope of college fading quickly, Joseph Anthony Pereira was enrolled at Vermont Academy, an all-boys boarding school, in the hope that his grades would improve.

Although his grades did improve, Perry was later diagnosed with ADHD as an adult, which was the main cause of his trouble at school.

Fortunately, along with improving his grades, Vermont Academy also introduced him to students from around the country, and it was his classmates there who showed him rock and roll music.

During his time at the Academy, he heard Jimi Hendrix, The Yardbirds, The Kinks, The Rolling Stones, and The Who for the first time, igniting his passion for music.

During the 1960s, Perry and Tom Hamilton formed The Jam Band and were later joined by Steven Tyler, Joey Kramer, and Brad Whitford.

The band became known as Aerosmith, and while they were initially called Rolling Stones knock-offs, by the mid-1970s, they had created a unique sound that made them stand out.

However, after Aerosmith released their fourth album, Rocks, things began to decline due to drug use straining relationships.

By 1979, Aerosmith was headlining for Van Halen, AC/DC, and Foreigner, but Perry and Tyler’s drug use was taking its toll, and an argument ensued that caused Perry’s wife, Elyssa Jerret, to throw a glass at Tom Hamilton’s wife.

This led to Perry leaving the band and forming the Joe Perry Project, though it never did as well as Aerosmith.

Perry ended up returning to Aerosmith in 1984, and after drug rehab, the band ended up hitting its stride with numerous multi-platinum albums.

Things went incredibly well until 1996, when the band’s manager began pressuring the members to spread misinformation about each other, efforts that nearly led to another breakup.

Fortunately, they fired their manager shortly after, and under new management, Perry helped write the band’s first number one single, “I Don’t Want to Miss a Thing,” which appeared on the soundtrack for Armageddon, a film Liv Tyler starred in.

Heading into the 2000s, Perry and the band played at Super Bowl XXXV in 2001 and benefited from the video game Guitar Hero: Aerosmith in 2008.

In 2014, Perry released his autobiography Rocks: My Life In and Out of Aerosmith, and in 2015 started a side project with Alice Cooper and Johnny Depp called Hollywood Vampires.

Most recently, Perry joined Aerosmith for a residency in Las Vegas, which started in 2019.

Joe Perry has made most of his money as a member of the American rock band Aerosmith, though the Joe Perry Project and Hollywood Vampires have also contributed to his incredible wealth.

As the lead guitarist, Perry makes a good amount of money from touring, album sales, and streaming royalties, ensuring that he is never at risk of going broke.

In addition to his, Perry has also made money by doing numerous compilations, most recently featuring alongside Blake Shelton and Pitbull on the latter’s Libertad 548 album.

Joe Perry was married to Elyssa Jerret from 1975 to 1982, and together they had one son, Adrian Perry.

In 1985, he married his second wife, Billie Paulette Montgomery, and had another two sons, Tony Perry and Roman Perry, along with her son Aaron, from a previous relationship.

Perry endorsed John McCain during the 2008 American Presidential elections, stating that he’d been a lifelong Republican.

Working with the Ashley Food Company, Perry founded his line of hot sauces called Joe Perry’s Rock Your World Hot Sauces, which he also showed off during a 2004 episode of Inside Dish with Rachael Ray.

Perry is fairly active on both Twitter and Instagram, where he posts tour information, band photos, and updates on his work.

While he hasn’t won awards for the Joe Perry Project or Hollywood Vampires, as a member of the American rock band Aerosmith, he has won numerous impressive awards.

Although there are too many to label in total, here are some highlights from Joe Perry’s career:

How Does Joe Perry Spend His Money?

Flaunting his impressive net worth in the way only a rock star can, Joe Perry spends his riches rather lavishly.

Perry and his wife Billie have owned homes in Vermont, Massachusetts, Florida, and Los Angeles, though he sold his farm in Vermont in 2020 and listed his Massachusetts home in 2022 for $4.5 million, citing that the couple is spending more time in L.A.

While he doesn’t own one of the most expensive penthouses in the world, he certainly isn’t skimping when it comes to luxury homes, even if he is downsizing as of late.

Additionally, since Perry and his wife are animal lovers, they have helped fund the construction of an animal shelter in their Massachusetts neighborhood and donated money to the Sea Shepard Conservation Society to help protect marine animals and environments.

Here are some of the best highlights of Joe Perry’s career:

Joe Perry has said a lot of stand-out quotes, but some stick out more than others.

While we couldn’t possibly cover everything he’s said, here are our favorite quotes from Joe Perry:

Now that you know all about Joe Perry’s net worth, we can look at some of the important lessons that his storied career can teach us.

Here are some of the best success lessons to learn from Joe Perry:

Everyone is going to make mistakes at one point or another, but dwelling on them is only going to stifle your potential.

Always treat your mistakes as a valuable lesson and come back from them wiser and stronger.

Perry has had his fair share of conflict with his bandmates, but ultimately they’ve ended up sticking together.

While conflict is sometimes inevitable in any career, it’s important not to burn bridges on your road to success unless absolutely necessary.

3. Take Things One Day At A Time

Although it’s important to have a long-term plan for success, you should also strive to take things one day at a time and not let yourself worry about things you can’t immediately change.

If you spend too much time worrying about the future, you’ll fail to find the full potential of the here and now.

Joe Perry is one of the greatest guitarists of all time, and without him, the American rock band Aerosmith wouldn’t have been nearly as successful.

While his career hasn’t always been smooth sailing, his net worth has steadily increased throughout his time in the spotlight.

What do you think about Joe Perry’s net worth? Leave a comment below.