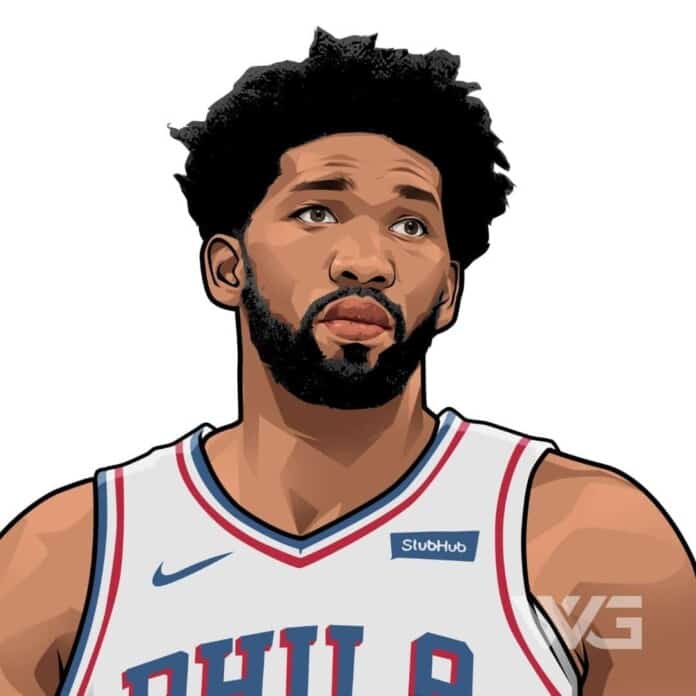 What is Joel Embiid’s net worth?

Embiid plays for the Philadelphia 76ers of the NBA. After one year of college basketball with the Kansas Jayhawks, he was drafted with the third overall pick in the 2014 NBA draft by the 76ers.

Though early in his career, he had seen his fair share of injuries and challenges, striving for excellence in the NBA, as an ever-enduring fellow, he has refused to succumb to its toils.

Embiid is the son of a military officer, Thomas Embiid, and his wife, Christine Embiid. His parents wanted him to be a doctor. He aspired to play volleyball in Europe at first. At the age of 15, he began playing basketball.

He was discovered by Luc Mbah, a Moute, another Cameroon native, and an NBA player, at a basketball camp in the country. Embiid moved to the US at the age of 16, taking Moute as his mentor.

Embiid declared for the 2014 NBA Draft on April 9, 2014. He was selected for the third overall pick by the Philadelphia 76ers six days after his declaration. He signed a rookie contract with the 76ers on August 26, 2014.

Embiid made his first appearance for the 76ers on October 4, 2016, against Boston Celtics in the first preseason game. His team won the game 92–89, in which he made four rebounds, two blocks, and six points.

He debuted in the playoffs on April 19, 2018, against Miami Heats. The game ended with the 76ers beating Miami Heats 128–108, with Embiid scoring 23 points. He had missed the first two playoffs due to an injury on his left eye.

He is one of the seven players with 200 blocks, 1,000 rebounds, and 2,000 points in their first 100 games. Other players to achieve this feat include Shaquille O’Neal, David Robinson, Ralph Sampson, among others. Apart from Wilt Chamberlain, he is the only other person from the Philadelphia 76ers to have multiple triple-doubles in one season.

As of February 2023, Joel Embiid’s net worth is estimated to be roughly $35 Million.

Here are some of the best highlights of Joel Embiid’s career:

“The Process is never going to end. It’s an ongoing thing. I don’t think it’s ever going to stop. As I have explained before, it’s a process for making it to the playoffs. It’s another one to make the conference finals, another one to actually go to The Finals and win the championship.” – Joel Embiid

“When I look at myself, I’m not a big man – I’m a guard. I can do everything on the basketball court. You can name it – pass, post up, shoot the ball, bring the ball up, being a playmaker – so I’m excited to break that stereotype.” – Joel Embiid

“I think it would’ve been a little easier if I grew up in America; they’ve got better conditions for basketball players. At the same time, many people have said to me that having to start playing so late helped me not pick up bad habits.” – Joel Embiid

“My very first scrimmage at Kansas, I got dunked on so hard by Tarik Black that I almost quit. Tarik dunked on me so hard that I was looking at plane tickets home. This guy was a senior. He was a grown man. I didn’t know what was going on. He got his own rebound and dunked over me so hard that everything went in slow motion.” – Joel Embiid

“One night, I went out with my teammates. I don’t drink alcohol, so I wasn’t drinking. This girl walked up to me; she was talking to me. She was like, ‘Why aren’t you drinking?’ I was like, ‘I don’t drink. Alcohol is nasty.’ She said, ‘I might have something for you.’ She went and got a Shirley Temple. Then I was like, ‘Ohhh, OK.” – Joel Embiid

Now that you know all about Joel Embiid’s net worth and how he achieved success; let’s take a look at some of the lessons we can learn from him:

1. Pain Will Be The Strenght For Tomorrow

We must embrace pain and burn it as fuel for our journey.

A problem is a chance for you to do your best.

How much is Joel Embiid worth?

Joel Embiid’s net worth is estimated to be $35 Million.

How old is Joel Embiid?

How tall is Joel Embiid?

Joel Embiid is a Cameroon-born basketball player who debuted for the 76ers quite late due to his foot and knee injuries.

He was named to be a part of the NBA All-Rookie First Team in his debut season, even though he had played only 31 games for his team. Embiid has been nicknamed ‘The Process.’

As of February 2023, Joel Embiid’s net worth is approximately $35 Million.

What do you think about Joel Embiid’s net worth? Leave a comment below.