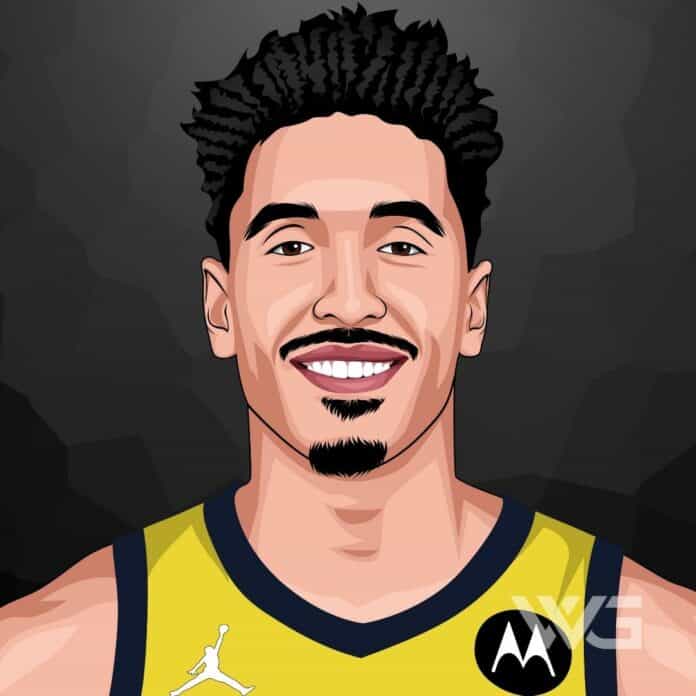 What is Malcolm Brogdon’s net worth?

Malcolm Brogdon is an American professional basketball player who is currently a guard for the NBA’s Boston Celtics.

Brogdon was the 36th overall selection in the 2017 NBA Draft after spending his college career with the University of Virginia.

As of January 2023, Malcolm Brogdon’s net worth is estimated to be $67 Million.

Malcolm Moses Adams Brogdon was born December 11, 1992 in Atlanta, Georgia and grew up in the metro area.

Brogdon was one of the top high school players in Georgia, and received scholarship offers from several schools including Notre Dame before committing to the Virginia Cavaliers.

Malcolm Brogdon spent five seasons in Charlottesville, including a redshirt season after suffering an ankle injury that he recovered from nicely.

Brogdon was a two-time ACC Defensive Player of the Year and three-time First-Team All-ACC selection, but was not considered a top NBA prospect.

Despite being an All-American in college, Brogdon had to wait until the second round of the 2016 NBA Draft to hear his name called by the Milwaukee Bucks.

Brogdon shocked the world in his first season by winning the NBA Rookie of the Year Award over the likes of Ben Simmons and Brandon Ingram, the top two picks of the draft.

He spent three seasons with Milwaukee, averaging 12.8 points, 3.5 rebounds and 3.6 assists per game during that time, but was sent to the Indiana Pacers in 2019 as part of a sign-and-trade deal.

Brogdon’s contract was for four-years and $85 million, and three of those years were spent with the Pacers before Brogdon was traded to his current team, the Boston Celtics.

After playing for three seasons on a minimal contract, Malcolm Brogdon received a huge payday when he signed with the Indiana Pacers as part of his trade from Milwaukee.

Brogdon would not remain with the Pacers throughout the length of the contract, but it did transfer over to Boston when he was traded for five players and a draft pick.

The figures of Malcolm Brogdon’s earnings are based on his publicly announced contracts, but are not guaranteed to be 100% accurate.

After the 2022-23 NBA season, Brogdon is set to become an unrestricted free agent as his deal that was originally signed with the Pacers comes to a close.

Brogdon is almost certain to receive another contract in the NBA, though it’s hard to say exactly how much it will be for as Brogdon is now in his 30s and isn’t a starter for the Celtics.

Since he was relatively unknown when coming into the NBA as a second-round pick, Brogdon wasn’t making a large salary for the first few years.

That would change dramatically after Brogdon showed off his skills as a rookie, landing himself a big deal that has continued to increase his net worth throughout his career.

The figures of Malcolm Brogdon’s net worth are estimated in regard to his NBA salaries and endorsements and are not guaranteed to be 100% accurate.

Here’s a breakdown of Malcolm Brogdon’s annual net worth:

Brogdon is in the final year of his massive contract, and he’s likely to receive a lower salary on his next deal.

However, Brogdon will still be receiving millions of dollars on his next deal, which will allow him to add to his impressive net worth over the next few years.

Malcolm Brogdon is the son of Mitchell Brogdon and Jann Adams, with his father being a lawyer with his own television show and his mother serving on the board of Morehouse College’s psychology department.

Since his playing days at Virginia, Brogdon has been in a relationship with fellow Cavaliers athlete Victoria Janowski.

The couple is now married, and do not have any children, and any plans for potential children have been kept between the two.

Many knew that Malcolm Brogdon was destined for great things in his career, whether it would be in basketball or a career in law.

Brogdon has ended up excelling in basketball to the point where he’s earned a long list of awards for his performance, so any other career choice will have to wait.

Here are some of the awards and achievements from Malcolm Brogdon’s career:

Brogdon will undoubtedly add more individual accomplishments to his resume before he retires, and will be successful in life after basketball.

As for the basketball accomplishments remaining, Brogdon is hoping to add an All Star Game appearance and an NBA Championship.

How Does Malcolm Brogdon Spend His Money?

With his massive net worth, that doesn’t mean that Brogdon hasn’t spent some money on himself, though, opting for a mansion for him and his wife.

Brogdon spent $5 million on his home in Atlanta in 2022 which features six bedrooms and eight bathrooms spread across 6,500 square feet, while also including an inground pool.

On top of making his way up the ladder of richest NBA players in the world, Brogdon has a lot of milestone moments that have happened in his career dating back to his high school days.

From being one of the top 100 recruits in the country while growing up in Atlanta to being a mainstay in NBA lineups, Brogdon has had a lot of great moments thus far.

Here are some of the best highlights of Malcolm Brogdon’s career:

If Brogdon were to retire at this moment, it would have been a tremendous career, but he still has a lot left in the tank and will add to his list of highlights.

As he begins his 30s, Brogdon might not be at the top of his game anymore, but he’s still a valuable player for the Boston Celtics and hopes to become an NBA Champion.

Malcolm Brogdon was one of the biggest surprises in the history of the Rookie of the Year Award, and has proved that he’s not just a flash in the pan.

Brogdon is an incredibly well-spoken person, too, and is considered to be one of the best locker room presences in the NBA with a lot of knowledgeable things to say.

Here are our favorite quotes from Malcolm Brogdon:

The former college basketball great was still not considered to be a great NBA prospect, but only waited until his rookie year to silence any doubters.

Brogdon made NBA history by becoming the first second-round draft pick to win the Rookie of the Year title, and he’s one of the best people in the league to listen to on just about any topic.

Now that you know all about Malcolm Brogdon’s net worth, there is a lot that can be learned from the man that’s nicknamed “The President.”

Here are some of the best success lessons to learn from Malcolm Brogdon:

1. Use Your Powers For Good

After signing a massive contract, Brogdon didn’t simply pocket all of the money for himself, and has instead chosen to give back in a big way.

Since 2018, Brogdon has been operating a nonprofit organization called Hoops2O that aims at bringing clean water to Africa.

Brogdon has enlisted the help of several other NBA players to help him in his efforts, and tens of thousands of people have received clean water because of Brogdon.

A lot of players that make it into the NBA take advantage of their prime years of athleticism by getting into the league early and saving their education for later.

Malcolm Brogdon is one of those exceptions, though, as he spent five seasons at Virginia where he received both his bachelor’s and master’s degrees, with the latter coming in public policy.

Brogdon has been a big proponent of players receiving a formal education, and it’s something that runs in the family as Brogdon’s father is a lawyer and his mother is a psychologist.

3. Always Get Back Up

Malcolm Brogdon may have given up basketball from a very young age if he didn’t have the tenacity that he learned from having siblings.

As a child, Brogdon would play basketball with his brothers and get knocked around quite a bit, but always wanted to prove his worth and kept playing.

Brogdon continued to have that tenacity, and showed that he belonged at every level of basketball in which he’s played, proving any doubters wrong along the way.

There are a lot of people that wouldn’t be surprised if Malcolm Brogdon was the President of the United States one day.

Brogdon isn’t just a great basketball player, but he’s also highly educated and one of the greatest philanthropists that the sport has ever seen.

Being great at basketball is just the icing on the cake for Brogdon, who figures to have a long career in the spotlight long after his playing days are finished.

As of January 2023, Malcolm Brogdon’s net worth is estimated to be $67 Million.

What do you think about Malcolm Brogdon’s net worth? Leave a comment below.

David Coulthard is a former British racing driver who has earned millions by winning some of the biggest races in Formula One.