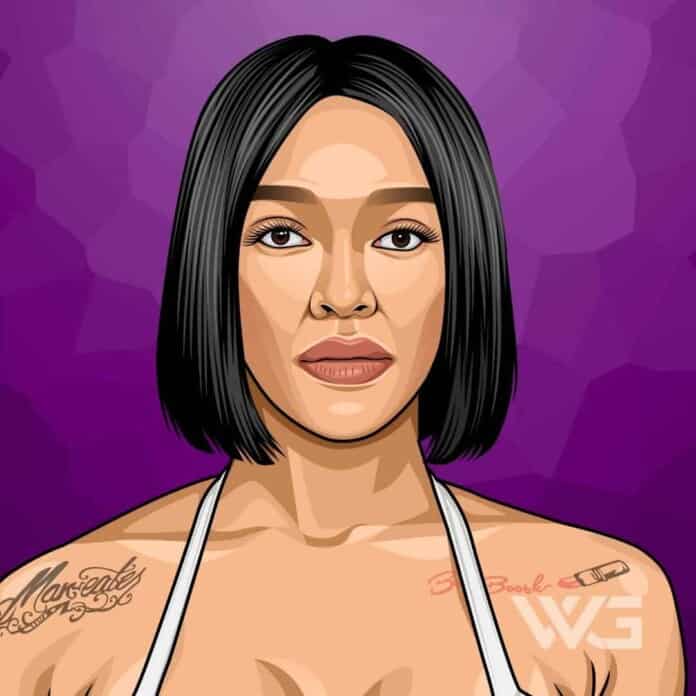 What is Joseline Hernandez’s net worth?

As of February 2023, Joseline Hernandez’s net worth is estimated to be roughly $300 Thousand.

She is best known as one of the main cast member of the VH1 reality series Love & Hip Hop: Atlanta.

Joseline Hernandez was born on the 3rd of November, 1986, in Ponce, Puerto Rico. She grew up in the public housing system of Puerto Rico. Her biological father died from a heroin overdose.

Her youngest brother has autism and requires special care. From the age of 16, she began stripping in order to provide for her family.

As part of the show’s prerogative, Stevie helped Joseline create and record a series of singles like ‘Church’ and ‘Stingy with My Kutty Katt’.

She has also shot music videos against these songs which belong to the reggae genre.

Besides her own music videos, she has appeared in Rocco’s Wordplay 2 track ‘Girls Gone Wild’ and Stevie J. produced music videos like Trey Songz‘s ‘Hail Mary’.

Since her success, Joselin has made several appearances in other television shows like The Wendy Williams Show, K. Michelle: My Life and This Is Hot 97.

She has appeared as a co-host on the talk show ‘The Real’ in 2017. Joseline has also featured in a spinoff of her successful show Love & Hip Hop: Atlanta, titled ‘Stevie J & Joseline: Go Hollywood’ in 2016 which also saw major success.

Here are some of the best highlights of Joseline Hernandez’s career:

“I’m starting to take it as a compliment because they say only that men that turn into women are perfect. And I am perfect. I have a perfect face and the perfect body and I have the perfect everything – I don’t have a flaw in me. I really started noticing I’m 100% woman… It’s really like, I can’t even begin… I’ve never even heard that before.” – Joseline Hernandez

“I was stressed out and I was wrong for doing that. That was my past but that was the first thing that I thought about. I just wanted people to leave me alone.” – Joseline Hernandez

“Well, they can say what they wanna say if they think I’m Stevie’s side chick…It doesn’t matter to me what people say about me. I’m a single woman I do what I want. I do what I please, whenever I wanna do it.” – Joseline Hernandez

“No, I wasn’t surprised at Stevie’s reaction. I know what kinda person that I’m dealing with. I know how he reacts to anything and everything.” – Joseline Hernandez

Now that you know all about Joseline Hernandez net worth, and how she achieved success; let’s take a look at some of the strongest lessons we can learn from her:

Don’t compare yourself to others. They aren’t comparing themselves to you.

Notice something in a random person that makes you smile to yourself and say, “That’s really inspiring.”

How much is Joseline Hernandez worth?

Joseline Hernandez’s net worth is estimated to be $300 Thousand.

How old is Joseline Hernandez?

Joseline Hernandez was born on November 3, 1986, and is currently 36 years old.

How tall is Joseline Hernandez?

Joseline Hernandez is a Puerto Rican-American actress and reality TV personality. She calls herself the ‘Puerto Rican Princess’ and no one can argue with that.

Joseline Hernandez is the reality TV sensation from the show ‘Love & Hip Hop: Atlanta’. She launched her own YouTube channel in 2016 to showcase her musical prowess away from the show and the views are steadily growing.

As of February 2023, Joseline Hernandez’s net worth is estimated to be $300 Thousand.

What do you think about Joseline Hernandez’s net worth? Leave a comment below.