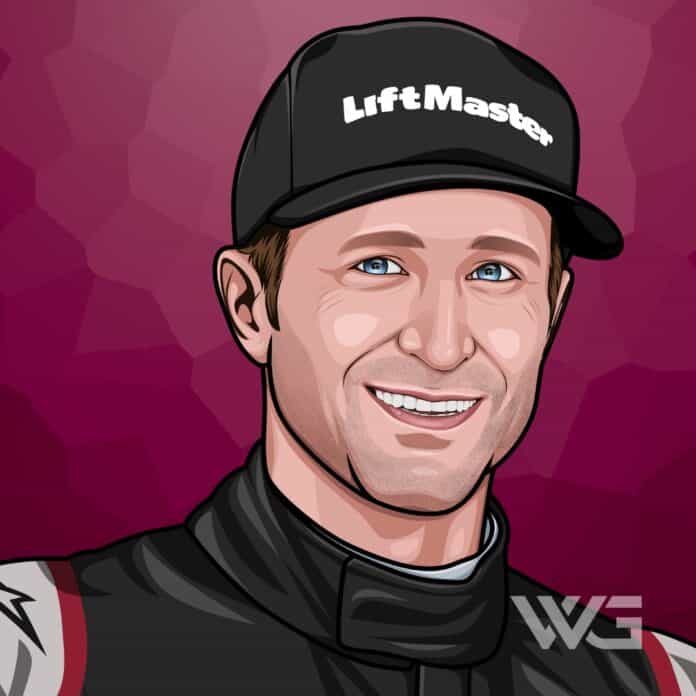 What is Kasey Kahne’s net worth?

Kasey Kahne is the former competitive stock car racer and owner of Kasey Kahne Racing. He is most famous for his Red Bull and Richard Petty Motorsports association.

His current team, Kasey Kahne Racing, competes in the World of Outlaws series. He now focuses a lot of his attention on philanthropy, donating millions to help children across the world.

Kasey’s parents wanted nothing but the best for their children, so once they saw Kasey’s love for racing, they decided to support his passion. Of course, it was easier for his father as he was the owner of various race cars.

After honing his skills on the dirt track his father built him when he was 8 years old, Kasey used his father’s cars to practice when he was old enough to drive.

Kasey began racing at the Deming Speedway at the age of 17 after he had mastered his dad’s car.

Kasey had become the USAC Midget champion by 2000 and was then approached by NASCAR.

He made his debut driving for Evernham Motorsports, which resulted in him winning Raybestos Rookie of the Year in 2004.

Two years later, Kasey won the Golden Corral 500, even though the rain delayed the start at the Atlanta Motor Speedway.

During the same year, he won the Pocono 500 even though he had been in 38th place for most of the race.

He drove one of Team Red Bull’s cars at the NASCAR Sprint Cup series in 2011. Kasey dominated the early part of the Brickyard 400 until spinning late in the race and ending in 18th place.

In 2012, Kasey raced for Hendrick Motorsports in the number 5 car but had an early accident during the first segment of a race.

Kasey had his first win with Hendrick Motorsports at the 2012 Coca-Cola 600. He also won the Lenox Industrial Tools 301 alongside teammate Jeff Gordon and ended the season on a career high.  He placed fourth in the rankings that season, claiming two wins and starting four races in pole position.

He had two impressive streaks at the Auto Club Speedway and Martinsville. After many ups and downs throughout the next few seasons, Kasey announced that he would not be returning to Hendrick Motorsports in 2017.

Kasey returned later in the year to announce that he would race for Leavine Family Racing in 2018.

He stepped away for a year and then competed at the Knoxville Raceway in 2020 and then raced at the World of Outlaws for Kasey Kahne Racing in 2021.

Kasey Kahne’s career was extremely successful, with his wins for Hendrick Motorsports in the 2012 season earning him significant prize money.

While he may not have been in the top spot in every race, he did enough to make it the best year of his career.

At the end of the 2018 season, Kasey decided to retire from full-time competitive racing, but he continued to race until the end of 2021.

His accident in 2021 at the Williams Grove Speedway, which kept him out of racing for a while, was one of the reasons that he decided to end his racing career.

Kasey is one of the richest racing drivers in the world and is known for being one of the most popular and approachable people in motorsport.

His great wealth and ownership of a successful racing team have not affected his easy-going style and affable nature.

Here’s a breakdown of Kasey Kahne’s annual net worth:

Kasey uses his great wealth to help people all over the world and he’s a well-known philanthropist.

He is often involved with charities such as Make-A-Wish, Victory Junction, Ronald McDonald House, and many more.

Kasey used to date Samantha Sheets until she fell pregnant and had a son named Tanner.

The couple split up amicably and Kasey maintains a happy relationship with their child.

In 2020, Kasey began dating Amy Long, who is a former reporter. The couple announced the news of a new arrival in August 2022 on Kasey’s official Facebook account, with Tanner looking ecstatic that he’s becoming a big brother.

During his spare time, Kasey likes to play basketball and enjoys an outdoor grill. He also enjoys working with multiple charities and supports benefit concerts as well as racing events for charity.

Right from the start of his career, Kasey brought back silverware from his races.

His natural talent and the contacts he made through his father were all he needed to become one of the most successful racing drivers in NASCAR.

Here are some of the more memorable moments from Kasey Kahne’s career:

Kasey’s win at the Samsung/Radio Shack 500 in Texas was a defining moment for him.

That same year, his results pushed him to the top of the table and he was challenging for the “Chase for The Cup”.

How Does Kasey Kahne Spend His Money?

Kasey is a renowned philanthropist who is a huge contributor to multiple charities and organizations.

He was a part of the “The Drive” golf tournament which helped raise funds for The Strong Against Cancer initiative for the Seattle Children’s Hospital. The event raised millions of dollars with Kasey donating $1 million alongside Wilson.

Kasey is also known for being a part of the Make-A-Wish foundation, which grants wishes to children who are desperately ill.

In 2009, Kasey joined a new team, Richard Petty Motorsports, just before they merged with Yates Racing.

Unfortunately, Kasey was released from his contract with Richard Petty Motorsports, and it was announced that he would be driving for Team Red Bull.

Here are some of the best highlights of Kasey Kahne’s career:

Kasey’s move to Team Red Bull couldn’t have been more opportune as he was very happy there and racked up some impressive victories.

While he retired from racing, he did compete as a driver in his own team’s car and it remains to be seen whether he will do that again.

While Kasey is “Mr. Nice Guy” when he is out and about, put him in a race car and he’s as competitive and aggressive as the best of them.

He cannot bear losing and drives like a demon to ensure that he finishes way ahead if he can.

Here are our favorite quotes from Kasey Kahne:

Kasey is very aware of how lucky he has been to enjoy earning a living doing what he loves.

It hasn’t made him lose touch with his humanity though, and he is constantly finding a way to give back to his community.

Now that you know all about Kasey Kahne’s net worth, here are some of the best success lessons to learn from Kasey Kahne:

1. Always Remember To Give Back To Those In Need

Kasey has used his reputation and earnings to help those less fortunate than himself.

He is keen to help, especially terminally ill children and those with life-threatening diseases.

He wants to provide a better future for them and, as he has money to spare, he feels that it’s best to not let money distract one from what matters.

No matter how bad things got, Kasey was always able to pick himself up and find the good in things and people.

He feels that you never know what the universe has in store for you and you must be ready and prepared for opportunity when it comes knocking.

Kasey has always lived by the adage that once you set your mind to something, make sure to commit.

He is known for his strong belief in himself and also for his 100% commitment to his team and his family.

Kasey is an inspiration to up-and-coming racing drivers and fans alike. Not only has he made a huge success in his career as a racing driver, but he’s shown that you can be nice to people while you’re doing it.

He is known for his positive attitude and also for his hard work and determination, which led to him being one of the best racers in NASCAR.

What do you think about Kasey Kahne’s net worth? Leave a comment below.