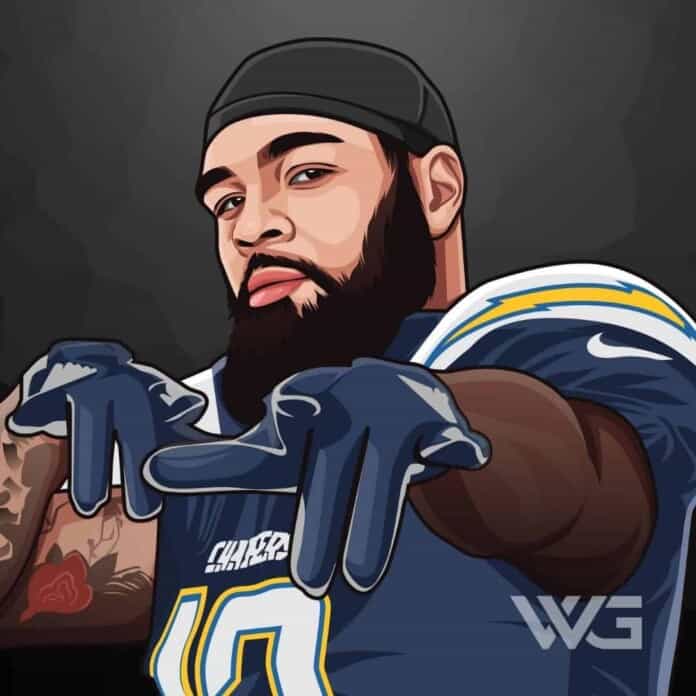 What is Keenan Allen’s net worth?

Keenan Allen is an American football wide receiver for the Los Angeles Chargers of the NFL.

Allen played college football for the California Golden Bears before leaving after his junior year. He was drafted by the Chargers in the third round of the 2013 NFL Draft.

Allen was a 2009 high school All-American, selected by USA Today and Parade, and also played in U.S. Army All-American Bowl, returning one punt for 33 yards as well as one kickoff also for 33 yards.

Allen was drafted in the third round, 76th overall, by the San Diego Chargers in the 2013 NFL Draft, though the team already had solid depth at the wide receiver position.

He was the highest selected wide receiver from Cal since DeSean Jackson in 2008. Allen had been on General Manager Tom Telesco’s radar for a while.

In 2014 season, Allen established a career-high of 10 receptions for 135 yards in a 33–14 win over the Jacksonville Jaguars. During Week 12 against the Baltimore Ravens, he recorded two touchdowns and 121 receiving yards contributing to the Chargers win.

On September 11, 2017, in the season opener against the Denver Broncos on Monday Night Football, Allen returned from his injury and had five receptions for 35 yards and a touchdown in the 24–21 loss.

Here are some of the best highlights of Keenan Allen’s career:

“Walking into the huddle for the first time, seeing Antonio, Phil, Ryan Matthews and just saying damn I’m here. But the way you embraced me and taught me the ropes was special for me. Just to hang around you and hear your talk was special. You Always had that swagger and confidence that couldn’t be touched and I always loved that about you.” – Keenan Allen

“Never understood how coaches can take another job interview during the most important part of the season.” – Keenan Allen

“Tell them yes 10 times. And No once. And they turn on you. Like I’m supposed to give them this stuff. I rolled out the bed and became this person overnight. Like I don’t have a family of my own. Like you ain’t grown too. Disheartening, disappointing, and disrespectful!” – Keenan Allen

Now that you know all about Keenan Allen’s net worth, and how he achieved success; let’s take a look at some of the lessons we can learn from him:

Stop doubting yourself, work hard, and make it happen.

Nothing worth having comes easy.

How much is Keenan Allen worth?

Keenan Allen’s net worth is estimated to be $1.5 Million.

How old is Keenan Allen?

How tall is Keenan Allen?

Keenan Allen is an American professional NFL player who has played college football for the California Golden Bears before leaving after his junior year.

Similarly, he was drafted by the Chargers in the third round of the 2013 NFL Draft. Allen won multiple rookie honors after setting Chargers’ records.

As of January 2023, Keenan Allen’s net worth is approximately $1.5 Million.

What do you think about Keenan Allen’s net worth? Leave a comment below.