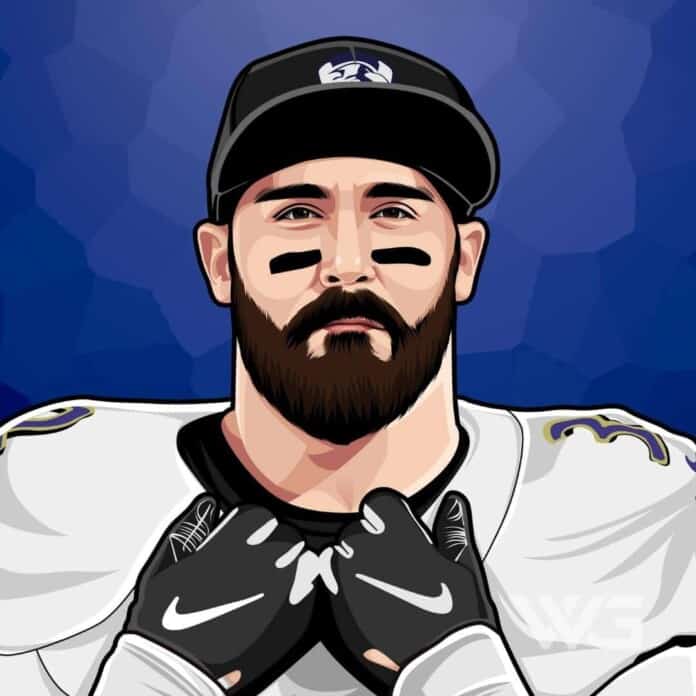 What is Eric Weddle’s net worth?

Eric Weddle is a former American football-free safety who played 13 seasons in the NFL.

Weddle played college football at Utah, where he was a consensus All-American. The San Diego Chargers drafted him in the second round of the 2007 NFL Draft.

Eric Steven Weddle was born on the 4th of January, 1985, in Fontana, California. He grew up in Alta Loma, California, and attended local Alta Loma High School. At Alta Loma High, he lettered in football, basketball, and baseball.

Weddle started the 2007 season as the strong safety behind Clinton Hart. He was also known to be the team’s dime back, playing in 2nd/3rd and long situations and being the backup holder on special teams.

Weddle had a breakout 2011 season with 88 tackles and a career-high seven interceptions. He helped clinch two early-season back-to-back wins with late fourth-quarter interceptions, becoming just the third Chargers defender to do so in the previous 20 years.

On September 19, 2016, Weddle recorded his first interception as a Raven in a 25-20 comeback against Josh McCown and the Cleveland Browns. It was also Weddle’s 20th career interception. Weddle was named to his fourth Pro Bowl and his first as a Raven as an alternate.

Here are some of the best highlights of Eric Weddle’s career:

“I usually take the first batch of some ice cream, eat it, and then about an hour later, at halftime of the Sunday night game, I go after a second serving. So I pretty much get a whole gallon of an ice cream Sunday night. It’s pretty bad.” – Eric Weddle

“It honestly feels like high school or college all over again. You’re comfortable; you see the game. You’ve seen a lot of ups and downs, a lot of good plays and bad plays. They’re all in the back of your head. It’s all experience over the years. There are guys that play well as rookies, but it’s hard.” – Eric Weddle

“Football is important, but my family and faith are also important, and no matter how good a football player I am, I knew I still needed to be a good member of the church. Having that spiritual connection helped me throughout the season. It brought balance. I felt better about myself and saw improvements in all aspects of my life.” – Eric Weddle

Now that you know all about Eric Weddle’s net worth and how he achieved success; let’s take a look at some of the lessons we can learn from him:

We may encounter many defeats, but we must not be defeated.

Perfection is not attainable, but if we chase perfection, we can catch excellence.

How much is Eric Weddle worth?

Eric Weddle’s net worth is estimated to be $20 Million.

How old is Eric Weddle?

How tall is Eric Weddle?

Eric Weddle is famous for being a football player who was drafted by the San Diego Chargers in the second round of the 2007 NFL Draft. He was elected to the Pro-Bowl in 2011 and 2013.

What do you think about Eric Weddle’s net worth? Leave a comment below.