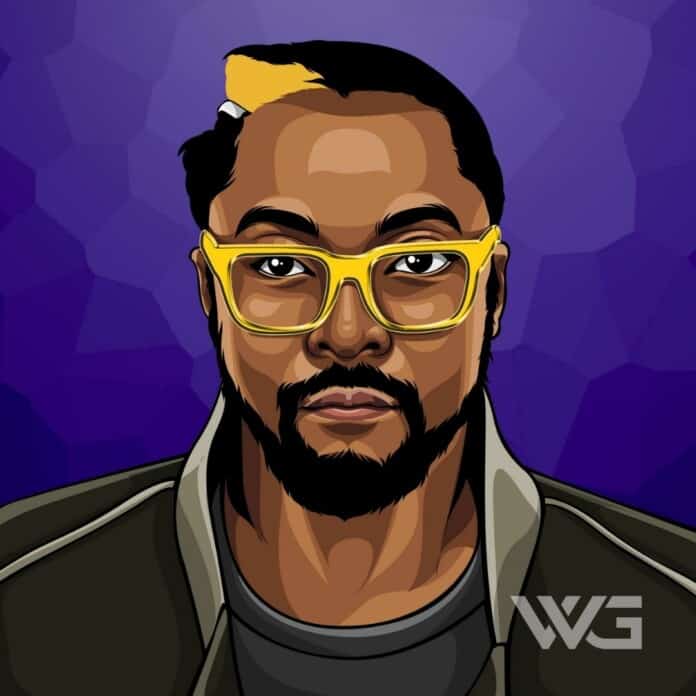 Will I Am Net Worth

What is Will I Am’s net worth?

He is best known as founding and lead member of the hip-hop group ‘The Black Eyed Peas’ and has also released four solo albums beginning with ‘Lost Change’.

William James Adams Jr. was born in Eastside Los Angeles on the 15th of May, 1975.

He was raised in the Estrade Courts housing projects in the Boyle Heights neighborhood, where he and his family were among the few African Americans living.

Will I Am was raised by his mother Debra, who encouraged him to be unique and to avoid conforming to the tendencies of the other youths in his neighborhood on the east side of Los Angeles.

While attending John Marshall High School, he became best friends with Allan Pineda who was also a future member of The Black Eyed Peas.

William began his musical career by forming the group ‘Black Eyed Pods’ and later in 1997 to ‘Black Eyed Peas’. The pop group later got signed by Interscope Records and they released their debut album ‘Behind the Front’ in 1998.

The Peas next album was ‘Elephunk’ in 2003 with hit tracks like ‘Boom Boom Pow’, ‘Let’sGet It Started’ and ‘I Gotta Feeling’. The first track titled ‘Where Is The Love’ with Justin Timberlake, released in 2002, got 8th position on the US Billboard Hot 100 and became the highest-selling single in the UK the same year.

The next released album ‘Monkey Business’ got three times Platinum certification by the RIAA and has sold over 100 million copies.

William dropped four studio albums ‘Lost Change’, ‘Must B 21’, ‘Songs About Girls’ and #willpower’. His album #willpower reached the 3rd position on UK charts and received Gold and Platinum certification.
As of February 2023, Will I Am’s net worth is roughly $70 Million.

Here are some of the best highlights of Will I Am’s career:

Favorite Quotes from Will I Am

“I can’t sing “I Believe I Can Fly”. I sing that horrible. But I can sing “I Gotta Feeling” good. I wrote it for my capabilities. So I Gotta Feeling is just about to let me make a song to inspire people to have a good time.” –  Will I Am
“Music is my therapy and my straitjacket. Music keeps me sane and keeps my mind on something. It’s fragile up there.” – Will I Am
“Whatever doesn’t kill you only makes you stronger.” –  Will I Am
“Disco is the first technology music. And what I mean is that ‘disco’ music is named after discs, because when technology grew to where they didn’t need a band in the clubs, the DJ played it on a disc.” – Will I Am
“Kids today aren’t listening to music audio-only. They’re picking up a CD and looking at the lyric sheet and wondering why the pictures aren’t moving around. Who wants to do that? It’s like Bam Bam Flintstone hanging with the dinosaurs vs. Elroy Jetson who’s flying around space. If I’m a kid, I wanna be kicking it with Elroy.” – Will I Am

3 Success Lessons from Will I Am

Now that you know all about Will I Am’s net worth, and how he achieved success; let’s take a look at some of the lessons we can learn from him:

When you follow your heart, you’re never supposed to do things because of what you think people might say. You do it for the opposite reasons.

2. All Problems Can Be Solved

There are no problems that can’t be solved. The world is too full of options. If you can’t solve the problem, it’s because you haven’t found the right option … But the answer is always there.

The world doesn’t need another opinion, they need another person taking action. So I take action because I see the call and respond.

How much is Will I Am worth?

Will I Am’s net worth is estimated to be $70 Million.

How old is Will I Am?

How tall is Will I Am?

Will I Am is best known for being a member of the worldwide band ‘The Black Eyed Peas’. He has also won a numerous of awards such as Emmy Awards and a Latin Grammy Award.

Will I Am has collaborated with stars such as Fergie, Rihanna and Flo Rida.

What do you think about Will I Am’s net worth? Leave a comment below.